The Gig is Good for Cheap Micro-Brews

Tucked away in Riverwest since 1904, it offers micro-brews in a micro-neighborhood 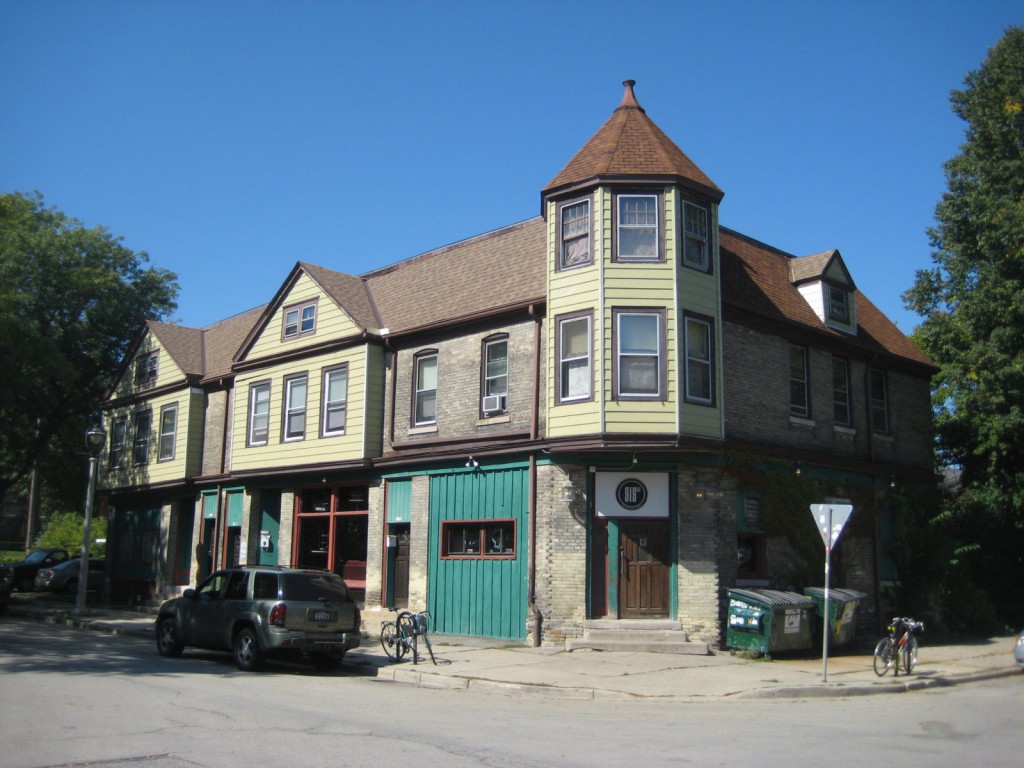 The Gig. Photo by Michael Horne.

If you follow Urban Milwaukee’s roving barstool sequentially, you’ll see it is still stuck in Riverwest, just a couple blocks away from the Uptowner, where we most recently visited. It’s not the first time this perpetually transitional neighborhood has held a wayfarer in the grips of its many saloon keepers — places like The Gig, 1132 E. Wright St., have been retaining customers for generations.

We have in the Gig one of the city’s more attractive mixed-use buildings of the early 20th century. This corner structure was built with three large apartments above and three stores below for Frank Nakielaki in 1904. the 82-foot by 42-foot brick-clad structure with its mansard roof was designed by Henry Messmer and Son, Architects, and cost $10,000. Since Henry Messmer, who lived at 2302 N. Booth St. died in 1899, the home was probably the work of his sons John or Robert. A two story, 16-foot by 42-foot addition was erected to the west in 1910.

One of the “stores” — the corner one — served then and now as a saloon, from all evidence. During prohibition, the space next to the saloon was a bakery. Bakeries and saloons had a symbiotic relationship at that time, since bakers had a ready supply of yeast and grains at hand. With a shared basement space, it would have been quite easy to brew beer. The hootch would never have to leave the building. Other tenants included a furnace repair man, who could probably rig up a still, if needed.

At the end of prohibition, Mary B. Kozeniecki got a license to operate the place as a tavern. According to her application, the former use of the space was “tavern,” wouldn’t you know?

In 1945 a grocery operated in the baker’s spot, followed the next year by a barber shop in its space and a tinsmith taking over from the furnace repair guy. In 1969, at a time when urban strife nationwide raised insurance premiums on exposed plate glass windows, this building, like so many others in the city, was effectively boarded up, spoiling the elegant storefront lines of the original architecture.

The building housed Kriszka’s tavern on the corner, with the middle spot operated by Metro Coin Machine Co.’s office. A cabinet maker was in the west unit.

Owner Dorothy Middleman, who paid $33,000 for the building in 1966, was granted a permit to “remove exist. windows, decrease opening sign. Face with rough cedar.” Much of this desecration remains, but could be reversed, possibly with the assistance of a City of Milwaukee facade grant.

In 1970 a Pabst sign hung above the building’s corner entrance, followed the next year by a Gettleman’s sign. Both are now gone, but you can still buy a Pabst in the bar, and for mighty cheap at that.

In 1974 the place became Kruzka’s bar, and George Kachar was granted a legal non-conforming continuous use permit to operate as a tavern.

The building and business were bought in 1983 for $130,000 by accountant Jim Haertel who had heard somewhere that there was money for him in the tavern business. (Just not necessarily in this place). He installed new toilet rooms that are now themselves historical artifacts, and covered up the defects in the interior walls with texturized surfacing and cedar wainscoting. These details still are notable features of the original portion of the saloon, as is the red and black tile flooring.

Haertel operated the place as Barrel Riders for a number of years before moving on to own what is now Best Place at the former Pabst Brewery. The building was sold for $110,000 in 1997 to David Keren, the current owner, and a partner.

Today The Gig operates as a neighborhood bar, as it has always. Its early evening clientele includes many folks from the area, skewing somewhat younger and more diverse than the crowds at nearby Gee Willickers or the Squirrel Cage, two other taverns east of N. Humboldt Ave. and also decidedly off the beaten path. 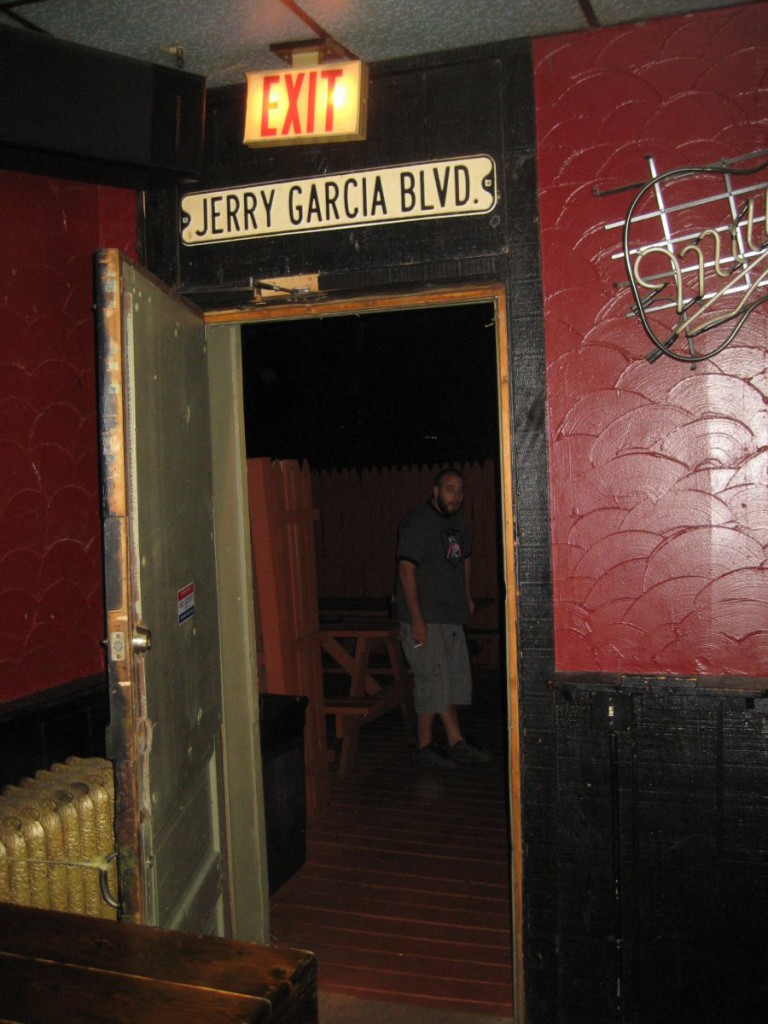 An attraction of the place in good weather is the fenced deck outside, complete with grill. You enter it through the modest door that has a “JERRY GARCIA BLVD.” street sign above.

The Doors, Hendrix, Bob Dylan, and Miles Davis are featured in photos and posters on the red walls of the tavern room, while the old bakery-barber shop-coin machine office space now holds two pool tables, well-spaced, and with ample viewing area for the gallery. This includes a large sofa. The walls here are decorated with three vibrant murals, something one would not have seen during the Kruszka’s tavern days, you may be sure. A pass-through wall allows the bartender to keep an eye on activities there, and an original-sized window affords a nice view of the street, and vice versa. The pool room floor is original maple. Who knows what lies beneath the lineoleum of the bar?

You can find an electronic dart machine beside a pinball machine as you look around the place. A tin Lakefront Brewery sign is on a wall beside a neon version in the adjacent window.

The matter of drink specials here is far too complicated an issue to address in a single review. Suffice it to say that there are a lot of them, posted on a chalkboard and elsewhere.

A featured micro tap like Shiner Bavarian Black Lager might set you back as little as $2 — and that’s on a Friday or Saturday. If you can hold out until Sunday, a Pabst tallboy will cost the same. For the truly budget conscious, you can get $1.50 rails and domestic bottles on Wednesday.

Beers on the tap line on a recent visit included Strongbow, New Glarus Spotted Cow, Lakefront Brewery’s IPA, Riverwest Stein Beer, and Fixed Gear along with Guinness. These beers can easily cost as much as $6 in some not-so-fancy places. Here you have a chance to drink them where they are most enjoyable — in a neighborhood place that is comfy and cheap.

[Heard out on the deck] “Getting good seafood in Milwaukee is like getting a good bratwurst in Hawaii.” — Two customers from the service industry, kitchen side. 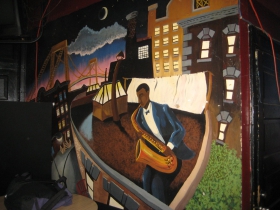 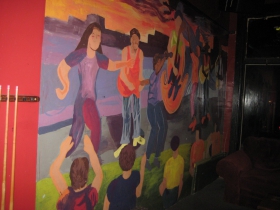 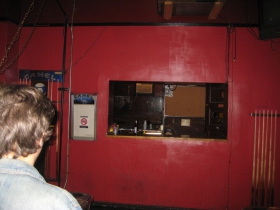 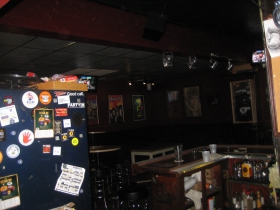 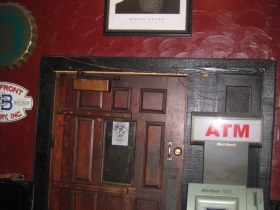 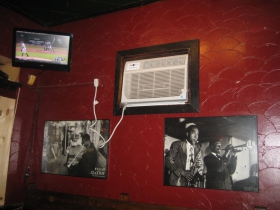 0 thoughts on “Taverns: The Gig is Good for Cheap Micro-Brews”