Anyone who remembers the buttery Morning Buns at Café Perrin can breathe a sigh of relief. They’re alive and well at Nourri. Join a weekend brunch to indulge in a Morning Bun made from the recipe that originated at La Boulangerie, also a fond memory in the saga of former Milwaukee restaurants. At Nourri on a weekend you’ll also find a sticky pecan roll (also an old standby at La Bou), a croissant, and sour cream coffee cake with whiskey glaze, all made in house.

This is not your grandmother’s Sunday brunch. As Executive Chef Christian Schroeder puts it, “We try to keep it eclectic. We want to get people to try things they haven’t tried before.” Does he mean the Duck Confit Hash with baby reds, chanterelle mushrooms, pinot noir-duck jus, cipollini onion, and a sunny side up duck egg? And instead of corned beef hash, Schroeder serves Braised Beef Short Rib Hash. As for eggs benedict, don’t look for a traditional version here. Instead, diners choose from two benedicts, Berkshire ham with caramelized onions and smoked salmon on a potato pancake. If you crave something more traditional, an omelet perhaps, the choices get even more challenging, Grass-fed tenderloin with buttermilk blue and Wild Mushroom Pate with Wisconsin cheve. You must look carefully to find the ordinary bacon, eggs and toast but then why?

The brunch menu gives more than a subtle hint of the reason owners Tesa Santoro and Joe Schulte changed the name from Café Perrin to Nourri. It comes from the French verb nourrir or to nourish, but they could have called it “bien nourri” or “well fed” as that’s the way my friends and I felt as we departed after two visits. By changing the name, removing the bakery/deli counter, and adding a bar, the owners send a clear signal that they have made major changes in the menu.

The menu wanders the globe as Schroeder’s small plates delight the eye and the palate. He likes to seduce customers with foods they haven’t eaten such as the “8 hour hen egg” in the kale salad from the lunch menu. This beige-colored egg has been slow-cooked for eight to twelve hours at 160 degrees. Schroeder explains,  “As it cooks, sugar in the egg white turns it brown and takes on the flavor of pork.” A mighty subtle flavor, I might add, after tasting the egg.

Small plates plucked from the dinner menu include Savory churros from Spain, Wild boar meatballs on polenta from Italy, Tofu, Hong Kong style, Foie gras from France, and Poutine, a popular fast food Canadian dish. Pork tenderloin served with butternut squash puree, smoked green apple, rocket, and hazelnut, comes with “jowl vinaigrette.” Schroeder explains simply, “We cure the jowl, cook it, and make a vinaigrette,” as if that’s what we all do with our pork jowls. He added that at Nourri, no part of the animal is wasted. He could have also been referring to the potato chip-thin duck skin that decorates the kale salad.  He dehydrates the skin, then, rewarms it before setting it upright on the salad.

Korean cuisine makes an appearance in Beef bulgogi made with fork-tender tenderloin and house-made kimchi. At lunch it’s served in taco shells, while at dinner the chef pairs it with sticky rice and a sunny-side-up duck egg. I mopped up every drop of the red sauce that dripped from the wafer- thin flour tortilla that held generous chunks of meat. And the Crab Cake sandwich, more crab than crumbs, will satisfy fussy aficionados of crab cakes.

When my friend requested fruit instead of the duck fat house-cut fries that came with the sandwich, our server brought a large bowl of melon, blueberries, and raspberries. Nice, but what she missed was a pile of delicious crisp fries literally deep-fried in duck fat. Those fries also came with an upscale version of a reuben, Grass fed braised corned beef, house- made 1000 and kraut, baby swiss, and like all the bread at Nourri, house made marble rye. This reuben is for people who like their corned beef served in slabs and plenty of it. While the reuben, the crab cake, and certainly the Barnyard grilled cheese with goat, cow, and sheep cheese, lean toward the familiar, entrees like Carrot agnolotti with veal brains, or Fish cheeks with buckwheat noodles show how far a chef can take us when he’s willing to experiment and we’re open to unusual flavors and unique food pairings. 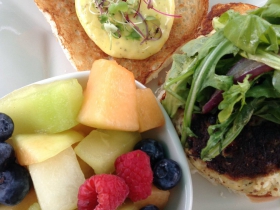 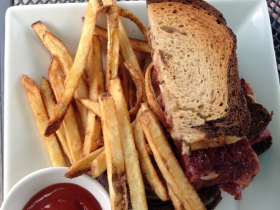 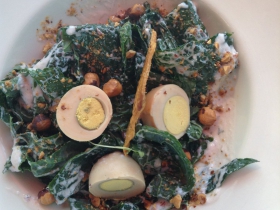 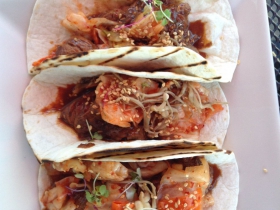