Mystery of the Mundane

A new exhibit at Cardinal Stritch questions if there is something mysterious in everyday life.

Everyday Mysteries is on view in the Northwestern Mutual Art Gallery at Cardinal Stritch University.

Is there magic in a bottle cap, water running down a drain, or an ironically placed can of air freshener? According to the artists in the exhibition Everyday Mysteries, the answer is yes.

Jon Horvath and Kyle Seis are slyly humorous. Taking their cameras into an ecclesiastical atmosphere, their large-scale photographs of slightly scruffy meeting halls and worn classrooms are places for unexpected, satirical, and irreverent surprises. Tangled cords and Christmas lights drooping from tired dropped ceilings are familiar in schemes not abiding by rules of glossy interior decoration, but their juxtapositions like an electric fan next to a luminous stained glass window touch on deeper symbolic notes.

Stained glass has a history of suggesting an altered place, a divine change in color that permeates sacred spaces. Here, it is overtaken by the wonders of electricity and the even richer blue plastic of translucent fan blades. A can of air freshener caught next to a fake decorative tree opens up the artificial atmosphere. Nature is rendered in plastic and fresh air delivered through chemical concoctions. Perhaps drawing on internet tropes, there is indeed a cat picture. After all, who can resist that? In this case, it is a poster on a chalkboard lined with a musical staff. The caption of the open-mouthed kitten brashly proclaims “Sing to the Lord,”a production that tiny text in the poster credits to the Catholic Youth Book. Proselytizing via pop culture.

If the notion of mystery implies a sense of belief in mysticism, then Grant Gill is intensely observant in the making of a personal system of symbolism. Regarding his penchant for dowsing, or the finding of water or precious materials through the use of tree branches or rods, he says, “This guided action, divine or otherwise, plays on opportunity and chance.”Multiple installations record moments where small, humble, branches revealed unexpected treasures such as coins and an interesting bottle cap printed with a silhouetted magician. A mysteriously inscribed rock seen at Bradford Beach, proclaiming love for an unknown “Jesse”and asking “But where is your soul?”prompted a photo project where portrait negatives of Gill’s acquaintances named Jesse are shown. While the objects ascribed with mystical, even mythical association are inherently personal, Gill’s work insists on keen observation and interaction with the environment where one finds themselves. It is a model for infusing quotidian meandering with richer significance if eyes are open, should you choose to accept the challenge.

Emily Belknap is an artist with a delicate touch and transformative skill when it comes to the mundane. Her sculptural inhalations often draw on a sense of unexpected scale. In her works, places such as plain, gray pavement or a lonesome parking lot are decorated by a dark, solitary, bare tree.

The combination of nature and the utilitarian character of the manmade environment resonates on the same line as Horvath and Seis’fake tree and air freshener, but Belknap’s tonality is poetic rather than playful. Perhaps most elegant in terms of material and motion is her creation of a basement. The viewer stands over the foundation of a building, built with tiny crafted cinder blocks a window well. A floor drain in the middle accepts a steady stream of water running along the floor of the cleanest, emptiest basement ever. The running water is oddly captivating, like a small insistent stream that bubbles up and returns to the earth. Its diminutive size renders it a meditative piece rather than a call for impending household repairs, as might be the case in the world outside the realm of art.

This is an exhibition about refocusing, looking at the ordinary anew. Nature and spirit are set against the banal, and though they don’t always win, they point to a richer sense of existence than the usual daily grind.

Everyday Mysteries is on view through October 12 at the Northwestern Mutual Art Gallery on the campus of Cardinal Stritch University (6801 N. Yates Road). 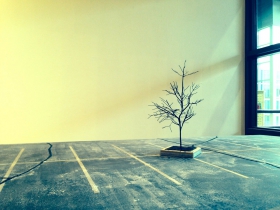 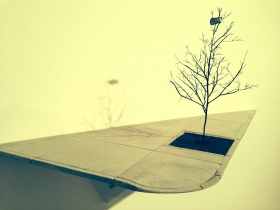 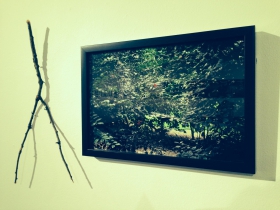 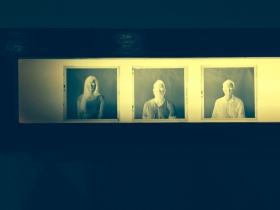 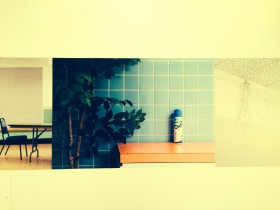 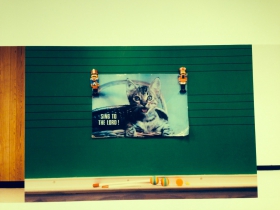 The Marshall Building hosts a gallery night of its own with open studios and galleries this Friday night. More than 100 artists will show work throughout its seven floors during this “monthly aesthetic happy hour.”

Ever been curious about the unseen corners of some of Milwaukee’s most notable buildings? This weekend is your chance to explore more than 150 buildings. Sites include the top of the US Bank Building and City Hall, the Beaux-Art central library building, various churches and museums, historic hotels, plus storied architecture such as the Frank Lloyd Wright-designed American System Home on Burnham Street and the mansion housing the Wisconsin Conservatory of Music. It’s a city-wide open house that opens eyes to the hidden spaces in some of Milwaukee’s best architectural gems, both old and new.