The Unbearable Loudness of Harley Hogs

Why are they allowed to violate noise ordinances? No one seems to know. 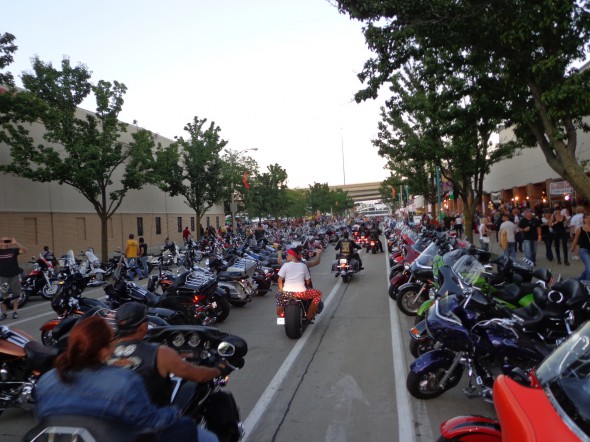 This past weekend was Harley’s annual Milwaukee Rally, which typically means a surfeit of ear-splitting Harley riders rumbling explosively around town. The Harley hogs routinely violate noise ordinances in Milwaukee and its suburbs, not mention cities and towns and rural hamlets across the nation. It’s a plague of tail piping noise and air polluters.

Just how widespread is the problem? Check online and you’ll find complaints about Harley noise across the continent, from Boston to Chicago to Denver to San Francisco and from Toronto to Pennsylvania to Wilmington, North Carolina.

Even in the quietest reaches of America’s national parks, you can run into the sonic booms of Harley riders. “We heard the Harley Noise everywhere in Yellowstone National Park while trying to enjoy the solitude of such a beautiful place,” writes a member of one poor vacationing family.

You’ll find an “I Hate Harley” Facebook page and another that advises you how to handle Harley noise pollution. “Do not approach or attempt to reason with motorcycle riders,” the site warns. “When possible, take down their license plate number and call the police.”

In New York City, where 90 percent of calls to the quality-of-life hotline concern noise of all kinds, motorcyclists are subject to a $400 fine if their bikes are audible from 200 feet away. In Carefree, Arizona, riders whose engine noise exceeds 80 decibels face fines up to $750. Chicago levied a $500 fine against noisy motorcyclists.

But police in most cities have far bigger problems to deal with, and so the scofflaw Harley riders get ignored, free to continue assaulting the ears of innocent Americans everywhere.

Milwaukee, of course, presents a special case: this is the home town of Harley-Davidson, the headquarters for the Harley Museum, the hallowed soil where the Harley mythology was invented. Which of course means we get to be engulfed with more Harley Hogs and Harley noise than any other city on the planet. Call it Brew City patriotism; along with beer, brats and bowling, we must also salute that scruffily cool Harley lifestyle.

Some years ago the Milwaukee Common Council decided it had enough of those car stereo systems with the bumping basses blasting through town. The Council’s Public Safety Committee, led by Ald. Bob Donovan, naturally, approved an ordinance to go after these cars’ owners.

But as annoying as these music systems are, they aren’t nearly as loud as Harley hogs. You can typically hear one of these auto assaulters from a good block away. But a Harley hog? “That would be discernable for three or four blocks,” said Paul Biedrzycki, an environmental health expert for the City of Milwaukee Health Department, in a story I wrote some years ago for Milwaukee Magazine.

Harley-Davidson representatives always tell the media that they respect noise ordinances and don’t favor violating the law. But… when Harleys are sold, they emit 80 decibels, which is already loud (about the sound equivalent of a lawn mower) and arguably in violation of the city’s night time noise restrictions (which state that “no power tools or equipment… may be operated between 9 p.m. and 8 a.m.”). But their design allows owners to easily modify the cycles with “straight pipes” that don’t mute the noise and exceed 100 decibels; some have estimated the noise exceeds 115 decibels.

And most bikes get modified. As author Bill Rook puts it in his book, How to Build a Harley-Davidson Torque Monster, “Sooner or later almost every Harley owner will modify his or her bike.” The reality is that Harley-Davidson would sell far fewer bikes if this transformation wasn’t easy to do.

To get a feel for the loudness of Harley pipes, consider how decibels are measured. For example, 90 decibels is four times as loud as 70 decibels and 110 decibels — the noise level that just one Harley may approach — is about 16 times as loud.

For comparison’s sake, consider the jack hammering and drilling that went on as state highway construction crews redid portions of I-794. Many residents complained and Ald. Bob Bauman compared the noise to “the bombardment of Iraq.” But a story in Milwaukee Magazine found the noise didn’t get above 78 decibels.

A Harley hog would be at least 12 times louder.

Wisconsin’s state law reads: “No person shall modify the exhaust system of any such motor vehicle in a manner which will amplify or increase the noise emitted.” Meaning Harley riders are breaking the law. In Milwaukee, police can stop a vehicle if it can be heard 50 feet away. Harleys can easily be heard 1,000 feet away. But have you ever heard of a Harley rider in Milwaukee being ticketed for excessive noise? That might kill the city’s draw to Harley tourists from across the country.

“The noise ordinance is a classic example of a government regulation that is only as effective as it’s enforcement,” Bauman says. “In this case enforcement is a problem. Harley’s are not exempt but they might as well be. Never heard of a ticket being issued.”

Milwaukee Journal Sentinel reporter Rick Barrett recently wrote a tepid story on the issue that framed it as a “debate” over the need for Harley noise. Right, that so-called debate would probably pit nearly everyone in America against only Harley riders, and perhaps officials with Visit Milwaukee and the mayor’s office.

Harley riders declare that “loud pipes save lives” — that automobile drivers can’t see these motorcyclists, so the noise gives a warning. But as numerous stories on this issue have noted, traffic safety experts say there’s no research that shows a loud motorcycle helps prevent crashes with other vehicles.

Bicycles are far quieter and harder to see than motorcycles, yet in Wisconsin in 2013 and 2014, motorcyclists had 11 times more fatal crashes than bicyclists, as Urban Milwaukee’s “Bike Czar” has reported.

The idea that Harley riders are all modifying their cycles out of concern for safety is a rather rich one, considering that 75 percent of motorcyclists killed in Wisconsin weren’t wearing helmets.

No, the more likely reason Harley riders all opt for loud pipes is that it’s part of the rebellious thrill of being an “outlaw” on the road. As the website “The Aging Rebel” notes, those modified pipes are an act of righteous opposition to the “noise nuts” and the dastardly government bean counters whose “noise and pollution abatement goals… are mandated by a self-righteous and distant bureaucracy.”

As the quote suggests, a modified Harley is more likely to emit air pollution along with the noise pollution. The Air Resources Board in California found that “motorcycles account for less than 1% of vehicle-miles traveled in the state yet account for 10% of passenger vehicles’ smog-forming emissions; swapping a compliant tailpipe equipped with a catalytic converter for one without emissions controls can emit as many as 10 times more smog-forming pollutants per mile.”

Yet we’re all supposed to be thankful when these hogs tear down the streets of our city.

207 thoughts on “Murphy’s Law: The Unbearable Loudness of Harley Hogs”