By Eric Oliver, Milwaukee Neighborhood News Service - Sep 2nd, 2013 10:04 am
Get a daily rundown of the top stories on Urban Milwaukee 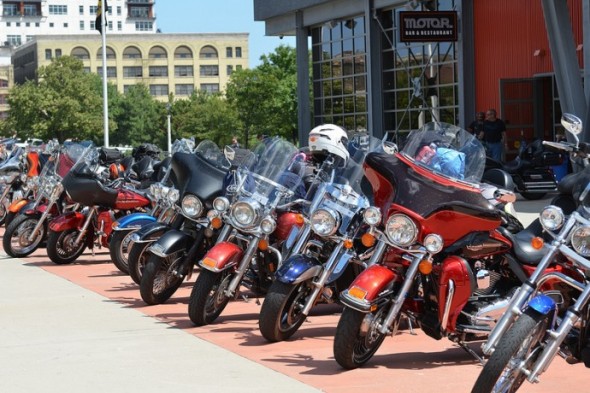 Motorcyclists park at the Motor Bar and Restaurant at 401 W. Canal St. (Photo by Sue Vliet)

Vinencia Dawson was ambitious, outgoing, spiritual and, above all else, feisty. On June 30, Dawson was killed when a car slammed into her motorcycle near Atkinson and Nash, two blocks from her mother’s house, where she was going to visit.

Nicknamed Ms. Feisty, Vinencia had an impact on everybody she met, according to her sister, Vinnetta Dawson. Vinencia ran her own clothing store, organized a clothing drive to get prom dresses for girls who could not afford them and stood up for people who did not have a voice. She also was generous. She had lent her helmet to a friend.

Vinencia Dawson was one of 43 Wisconsin riders killed in motorcycle accidents through July 2013. Several more motorcycle deaths have been reported thus far in August in Milwaukee alone. Most accidents occur during the warm-weather months.

The late Vinencia Dawson on her motorcycle getting ready for a ride. (Courtesy of Vinnetta Dawson)

The number of accidents increased 10 percent from 2011 to 2012, from 2,574 accidents to 2,837 accidents, according to data provided by Greg N. Patzer, manager of the Wisconsin Motorcycle Safety Program.

Dawson’s death drew the attention of Tracey Dent, a local activist, who was at a vigil held in her memory when he overheard bikers talking about the need for motorists to be more vigilant when sharing the road with motorcycles.

Dent suggested starting a petition asking the City of Milwaukee to establish a motorcycle awareness weekend in Wisconsin, dedicated to Vinencia. Safety and awareness would be taught to riders and others.

Dent drafted the petition that is currently posted on change.org. It has 531 digital signatures asking for a motorcycle awareness day on June 30, 2014. Organizers also are gathering handwritten signatures.

“It is just not a weekend, it is a lifetime commitment when it comes to safety and awareness,” Dent said. “We have to share the road with each other. In 2012, the state of Wisconsin had the highest fatality rate since 1986. Things are getting worse not better.” 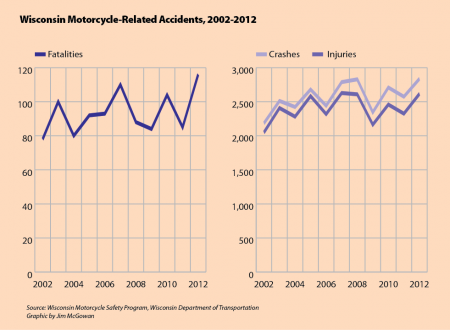 Patzer said that a majority of the fatal crashes involve older riders. Patzer speculated that as older riders transition to bikes that handle differently than the ones they rode originally, they are less comfortable and more prone to mistakes.

In 2012, the average age of people involved in fatal motorcycle accidents was 48. The youngest was 17 and the oldest was 79.

Shanica Sampson, a rider with Distinguished Divas, learned the importance of rider safety in a course she took. Before any ride she looks over her bike to make sure that everything is in good working condition. Once she is on the road she applies a concept she learned in the course: “SEE.”

“SEE” stands for search, evaluate, execute. Search means to search as you ride, evaluate means to evaluate the situation around you and execute means to adjust your speed and lane position in relation to others. Sampson said that applying this principle helps keep her safe.

“I don’t feel the vehicles around me are paying as much attention to me or as being as cautious as they can be,” Sampson said. “Because of that I have to be that much more alert.”

Sampson said she wants everyone to be more alert and patient when driving or riding.

“You see people on their cell phones, they cut you off, they even sometimes get too close to your tail pipe,” Sampson said. “If everybody paid a little more attention every rider could feel much safer.”