A neighborhood bar in search of a neighborhood, the one-time hangout for American Motors workers opens 6 a.m. but closes by dinner time. 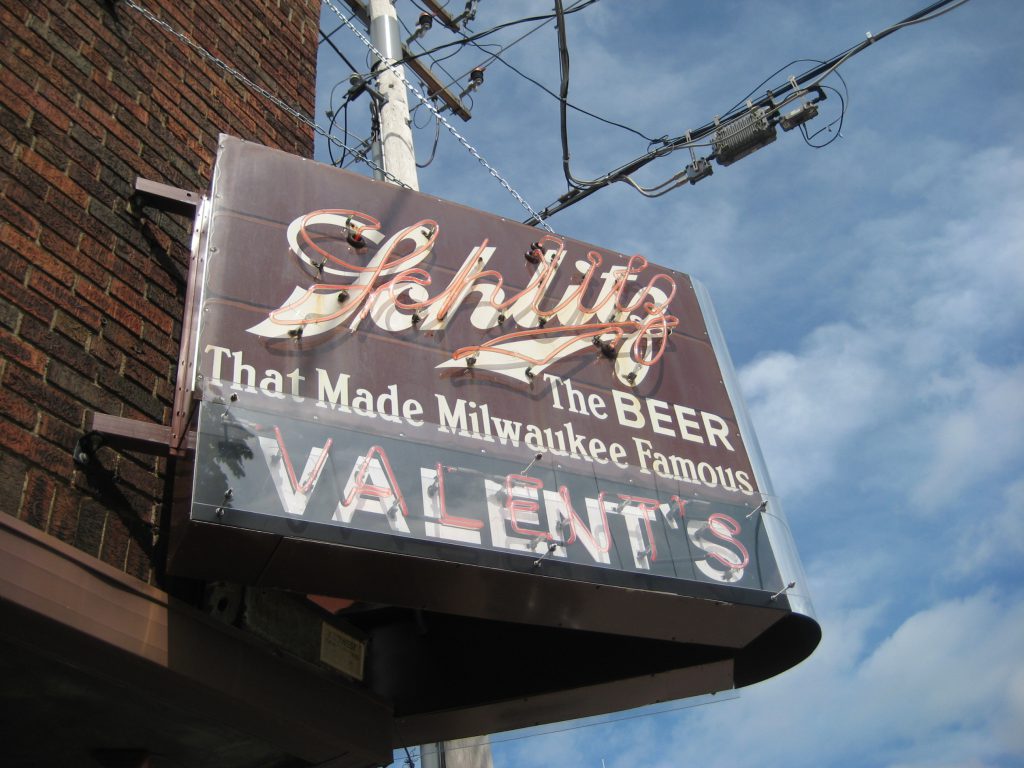 You can’t drink all day unless you start in the morning, so Valent’s is ready for you early-risers at 6 a.m., five days a week. But you can linger a bit over your Saturday morning breakfast — the tavern doesn’t open until 6:30 a.m. And you’ll have to find something else to do Sundays, when Ann Valent [vuh-LENT] takes a day off. She’ll turn 91 on September 25th, and hasn’t missed a day here since she opened this place with her late husband Gus Valent in 1946.

Back then, the great World War had ended, service personnel were returning and America’s factories such as Nash Motor Company, with its 33-acre 5-story body plant built across the street in 1939, were running around the clock responding to pent-up consumer demand.

Taverns like this one were common in Milwaukee, giving workers a refuge just outside the company gates, and offering such services as a free (or cheap) lunch, a place to cash a paycheck and even somewhere to live. They also ran nearly around the clock, staying open as many hours per day as the law permitted. This was the city of the 6 a.m. tavern, and Valent’s is keeping the tradition alive.

This 2-story building at the northwest corner of N. Richards St. and E. Abert Pl. was constructed as a “restaurant and boarding house” in 1925 for $15,000. There are still 12 rooms above the small tavern. The building also included living quarters for the owner, as it does today.

By 1934 the city inspector came around and decided to classify the “restaurant” as a “tavern and restaurant,” indicating that such had been its use since the time it was constructed during Prohibition.

The American Motors factory that was long the source of so many customers (and tenants) closed in 1989 after years of decline. The building was eventually demolished and redeveloped as a Wal-Mart and other retail shops, yet Valent’s continues on. What are you going to do? Gus died in 2003. Do you expect Ann to haul up stakes and find a new place for her lovely houseplants?

This is an industrial bar in a post-industrial world. Remnants of the former auto plant abound, with nameplates of virtually every American Motors model tacked to the bar. There is even an old Nash emblem.

Since the tavern no longer serves food, the restaurant area now is a place of storage and wonder, as are many of the tables in the room. Toward the east, the place takes on the air of a garden center as pots and saucers mingle with an old cash register and piles and piles of lottery slips.

There is only one beer on tap — Lite, and a bunch of canned beers. This is naturally a place for a Pabst, and you can get a can for $2.

There are also three electronic gaming machines scattered about the bar.

If you have a hankering for Pork Hocks, you’re in luck. Even though the restaurant has closed, you can still load up on Hershey chocolates, chips, Hall’s Mints, Snickers, Twix and Three Musketeers.

If you feel a sneeze coming on you can buy a fresh hanky for $1.25. A nice new comb will set you back a buck. Beef steak anybody? $1.50. Economize with a bag of Pork Rinds for just 60 cents.

The tavern has 2,118 square feet of space and a capacity of 80, which it probably has not reached since the night of the last shift over at AMC. It closes at 7 p.m., so this is not the place for Disco Night.

It has a two-bedroom, 945-square-foot apartment attached, as well as 12 sleeping rooms occupying a mere 2,124 square feet above. The latter is a reminder that many workers in industrial plants lived solitary lives. There was more to the American Dream at its height than the middle-class family model. All the lonely people.

The room is partly paneled in wood, the rest is plastered and filled with the memorabilia a bar can collect over decades. This includes a veritable navy of model ships. All aboard the U.S.S. Pabst, made from relics of that tasty Milwaukee product’s packaging — bottle and can — many years ago, when this was a highly nicotinized area, as you can see from the brownness here and there.

Today the smoking is outside in a lovely landscaped stretch of sidewalk. Cigarette sales account for 10 per cent of the action here, and a pack of Pyramid will set you back $6.25.

The outside of the bar is really classic. An enamel “Valent’s 3853” sign hangs above the door. “Restaurant” is spelled out above the window in a very stylish Deco script. The most prominent feature is a projecting Schlitz beer sign. It was put up in December, 1952 to replace a Gettleman sign installed in 1951. The Schlitz sign is now in its 62nd year of operation, which makes it the oldest one thus far documented in our tavern travels.

In 1982, the sign’s days seemed numbered. A permit had been taken out to “install a PABST sign to replace the existing Schlitz sign that will be removed,” a city inspector wrote. 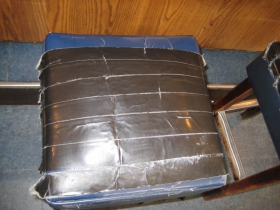 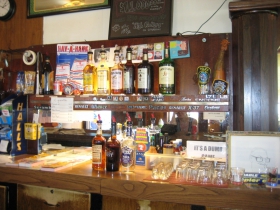 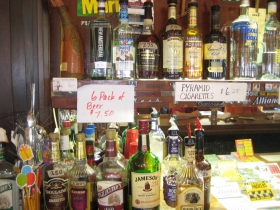 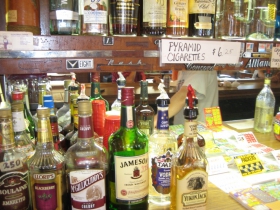 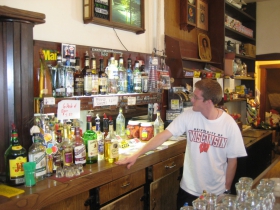 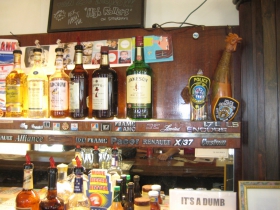