Will Republicans Support a Bucks Bailout?

It can’t get done without GOP legislators, but they have deeply felt reasons for opposing any deal. 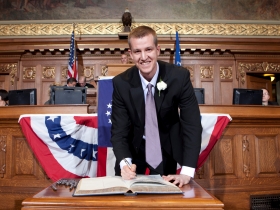 Rep. Dale Kooyenga (R-Brookfield) is six-foot-seven and played basketball in high school and on Lakeland College’s NCAA Division III basketball team. He was often a bench warmer in both high school and college, but those pushing for public funding of a new NBA arena are hoping he becomes a leading player on the pro-Milwaukee Bucks team.

The reality is that public funding won’t happen without the support of Republican legislators. Sure, Milwaukee Mayor Tom Barrett wants a new NBA arena built Downtown, but the city is financially constrained and unlikely to make much of a contribution. Sure, the retention of an NBA team carrying Milwaukee’s name has more benefit for the city than outstate Wisconsin, but Milwaukee’s delegation of Democratic lawmakers has little clout in the GOP-controlled legislature. Indeed, Democrats complain they haven’t even been contacted by the likes of Tim Sheehy, president of the Metropolitan Milwaukee Association of Commerce and spear carrier for the effort to build a new arena.

Even if Republican Gov. Scott Walker were to lose to Democratic challenger Mary Burke, and even if Burke got aboard the Bucks bailout bandwagon, it wouldn’t go anywhere without the support of Republicans, who will definitely control the state Assembly and probably the state Senate after the election.

And Republicans have not been excited about publicly funding an arena. In June 2013, the Business Journal invited some Republicans to an editorial board meeting on the subject, and boy, did lawmakers unload.

“I am very leery with this entire idea of saying we are going to tax a large group of people to benefit a small group of people,” said Assembly Speaker Robin Vos (R-Burlington).

“There’s no way in heck that I want to see the Miller Park tax automatically transferred over” to support a new NBA arena, said Rep. Joe Sanfelippo (R-West Allis).

“There’s zero chance I think that’s a good use of public money,” said the basketball loving Kooyenga, a key member of the Joint Committee on Finance.

No, you’ve never seen a story in the Milwaukee Journal Sentinel with so many negative quotes. The newspaper’s sports coverage drives its readership and subscriptions so it typically covers the issue of sports bailouts with a far gentler touch.

For Republicans, the legendary 1996 recall of George Petak looms painfully over this issue. Petak was a Republican state senator from Racine, who switched his vote to get the state legislation passed that paid for Miller Park. Racine voters heatedly opposed the five-county sales tax that was levied, so Petak was recalled from office and Republicans lost control of the state senate.

As Republicans see it, Democrats resisted voting for the package and then exploited the issue to push the recall of Petak. Of course the bill was championed by a Republican governor, Tommy Thompson, yet Republican Senate Majority Leader Mike Ellis wouldn’t vote for it, forcing Petak’s act of courage. So you might also blame Petak’s downfall on the Republican leadership.

But the details hardly matter. For Republicans, the recall was all about Democratic treachery, and they are not about to put themselves in a similar situation again. 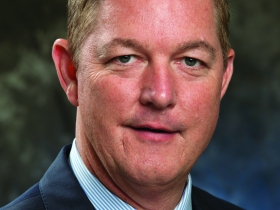 So Sheehy and Bucks supporters are searching for the magic formula that might make a public subsidy palatable and they hope to get something done between next January, when the legislature is next in session, and mid-2015, Sheehy told JS reporter Don Walker.

Sheehy and an MMAC working group composed of the region’s top business leaders have come up with a new and inventive source of public funding: using the state income taxes paid by visiting NBA players, as well as Bucks players, to help pay for a new arena. Sheehy estimated this so-called “jock tax” could raise $6 million to $8 million a year.

Of course that is already money collected by the state that would be diverted to building the new arena. But as Sheehy noted, that revenue would be forfeited if Milwaukee lost its pro basketball franchise because a new arena wasn’t built.

By contrast, the argument that pro sports has a significant economic multiplier that drives new taxes has been discounted by most economists. Money that isn’t spent by locals and tourists on pro sports may simply get spent on other attractions. But the revenue from players’ income tax payments “would disappear if the team wasn’t here,” Sheehy noted.

The idea has intrigued Kooyenga and some other Republican legislators, who have asked the Legislative Fiscal Bureau to study how much revenue is generated by the NBA in Milwaukee, including visiting players and Bucks players and the team’s front office personnel.

The question, Kooyenga noted, is “If we don’t have the NBA, what kind of budget hole would that create? If they aren’t here, we don’t get that money.”

It’s about the best rationale for a public subsidy of a sports team I’ve seen. Whether it will fly with the public remains to be seen.

In the case of the proposed NBA arena, it looks like at least 50 percent of the investment will come from taxpayers. Meaning, at best, 50 percent of any naming rights sold is a private sector investment. And no, you’re not likely to have it explained that way by the Journal Sentinel.

37 thoughts on “Murphy’s Law: Will Republicans Support a Bucks Bailout?”