It may have attracted only 10 percent of voters, but last week’s primary made big news in a number of ways: 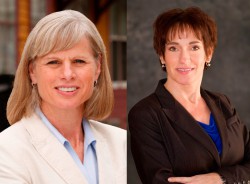 For the first time, Wisconsin voters on Nov. 4 will get a chance to elect Democratic women to two of the most important offices: Mary Burke, of Madison, as governor, and Susan Happ, of Jefferson, as attorney general. Burke would be the first female governor; Happ, the second woman attorney general.

Burke, Happ and their campaign advisers must now decide how much – if any – of a partnership they should explore. Busy learning how to be first-time candidates for important jobs, their paths rarely crossed before Tuesday. The two campaigns must decide if the synergy in a Burke/Happ joint pitch would help both of them, one more than the other, or neither.

They also must decide how much to trust each other, since they have such different styles. So far, Happ seems more willing to take risks than Burke. For example, it’s unlikely that Burke will film a TV ad in which she rolls up on a Harley to discuss her tough-on-crime record and love of hunting. But that was the TV ad Happ used, and one which impressed some Republicans, to introduce herself to voters.

Political pros like Assembly Speaker Robin Vos says he doesn’t know what to expect with two women leading the Democratic Party’s ticket for statewide office. But voters don’t decide based on a candidate’s gender, Vos insists. State Democratic Chair Mike Tate agrees: “Voters didn’t pick them because they are women.”

But Kessler also went out of his way to derail the attempted comeback of former Assembly Speaker Mike Sheridan, of Janesville, who wanted to replace Sen. Tim Cullen. Kessler formed and bankrolled the Citizens Against Payday Loans PAC, which ran ads attacking Sheridan for weakening a payday loan regulation bill while dating an industry lobbyist. Where did Sheridan finish in Tuesday’s 15th District three-way primary? Third.

Republicans who didn’t live in the hotly contested 6th Congressional District (where a recount of state Sen Glenn Grothman’s narrow victory over state Sen. Joe Leibham is likely), in Senate District 21 (where former Sen. Van Wanggaard beat Brian Steitz), in Waukesha County (six-way GOP primary in 87th Assembly District), or in counties with hard-fought primaries for sheriff, had little reason to vote in the GOP primary. So, some of them voted in the Democratic primary for governor for state Rep. Brett Hulsey, of Madison. That was especially true for Milwaukee County Republicans who voted in the Democratic primary between Sheriff David Clarke and challenger Chris Moews.

Republicans wanted to inflate Hulsey’s vote total to try and send a message that a surprising number of Democrats were unhappy with Burke. But in reality, only 3 percent of Democrats at the state convention responding to a wispolitics.com poll supported Hulsey. And that’s the same level of support Hulsey recorded in May’s Marquette University Law School poll.

Before he was elected President, Ronald Reagan made this phrase famous: Thou shalt not speak ill of a fellow Republican. Apparently, two Republican legislators in the primary for the 6th Congressional District’s open seat – Grothman and state Rep. Duey Stroebel – never heard of that rule, since they took turns carving each other – and Liebham – up.

One reason for the 11th Commandment rule is the fear that, when Republicans attack each other, it surfaces issues a Democratic candidate may exploit in the general election. Democrats are already talking about launching attacks on Grothman.