Which Milwaukee places do the best version of these Philly, New York and Chicago specialties? Read on.

Some regional specialties travel well outside their home bases (tacos come to mind), while others seem to lose something in transition. For some reason sandwiches seem particularly hard to transplant — New York pastrami and brisket sandwiches for instance (though Jake’s pastrami sandwich has nothing to apologize for). So I was delighted to discover versions of three of my favorite regional sandwiches — East coast submarines, Philadelphia cheese steaks and Chicago Italian beef sandwiches — here in Milwaukee that can stand proudly beside their homegrown models. There are probably others, but since I’ve never had a po’boy in New Orleans I wouldn’t want to judge its local incarnations. And there are plenty of worthwhile Chicago-style hot dogs available here, but since as long as you use a Vienna beef wiener, a poppy seed bun and the correct condiments the result will be acceptable, I haven’t included them either.

Subs are ubiquitous in America — Subway is the largest sandwich chain –but they always seem to me to lose a certain sparkle outside the East (and New Jersey in particular). It may be the bread, the quality of the cold cuts or the piquancy of the seasonings, but subs in Milwaukee never seemed like anything to go out of your way for. So it was nice to discover Jersey Mike’s (two locations, at 1232 S. Miller Parkway and 17550 W. Bluemound Rd), which though a national chain rather than a homegrown sandwich shop, makes subs that take me back to my college and graduate school days in the East. (I should mention that Mike’s was brought to my attention by my girlfriend, a New Jersey native). The bread is just right, the meats and cheeses are excellent and if you order it Mike’s Way, with lettuce (light on that please), tomato, onions, oil and vinegar and spices (heavy on those please, and some red pepper relish) you’ll find that missing sparkle restored. My favorite is the Original Italian, with provolone, ham, prosciuttini, cappacuolo, salami and pepperoni ($4.85 mini, $6.75 regular, $11.95 giant), but more stripped-down versions are also satisfying. There are hot subs too, and while the chicken parm ($6.75 regular, $10.95 giant) isn’t quite on the level of the one at Parm in New York, it’s pretty close, and the fresh tasting sauce holds its own.

Cheese steaks were of course invented in Philadelphia, but outside of there tend to be lackluster affairs. The bread is, as usual, all-important, as is the tenderness and succulence of the shaved beef; moreover, outside of Philadelphia there is an embarrassed reluctance to use Cheese Whiz, which is essential to an authentic cheese steak (though I’ve heard that a renegade faction in Philadelphia insists on American cheese). It’s a wonderful surprise then that The Philly Way (two locations, at 1330 E. Brady St. and 405 S. 2nd. St.), the creation of former Philadelphian Dave London, makes cheese steaks that can stand up against those from Pat’s, Geno’s and Jim’s (as determined by no less an authority than Philadelphia Magazine, which proclaimed these the best cheese steaks in the country outside Philadelphia). My favorite version is with onions, extra Whiz and mushrooms ($8.99), though sautéed peppers are available too, and either provolone or American cheese can be substituted for Whiz. And for the record, there are also fries served with beef and Whiz, some of the town’s better hamburgers, as well as pretty authentic Buffalo wings.

The Chicago-style Italian beef is another sandwich that doesn’t travel well, for reasons that are obscure to me. The versions I’d had locally all seemed leaden and not particularly flavorful — compared to those in Chicago at places like Mr. Beef on Orleans Street — until I discovered the ones at Dr. Dawg (6969 Port Washington Rd., 7700 W. Layton Ave.), about whose hamburgers I’ve written before.  They use Scala’s beef and Gonnella bread, and you can order them with a little meat juice, a ladleful or “soaker,” in which the whole sandwich (5” for $5.49, 7” for $6.79, 12” for $10.79) is dipped in juice—my preference, as it makes the beef and bread melt into a scrumptious whole. I like to order it with gardeniera ($0.50), and you can also have sautéed green peppers ($1.00), though I find that those disrupt the sandwich’s satisfying unity. You can get a combination of Italian beef and sausage, though I prefer the beef solo.

I’ve mentioned Dr. Dawg’s hamburgers, which with their brioche buns and organic Nieman beef are my favorite in Milwaukee. And though I said at the outset I wouldn’t take up Chicago-style hot dogs in this column, I do think that the eponymous ones at Dr. Dawg are the best in town. I think it’s the meaty tomatoes that make the difference. 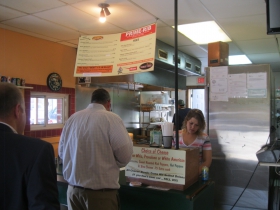 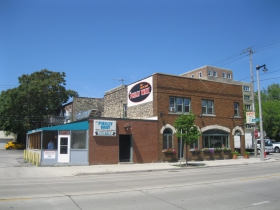 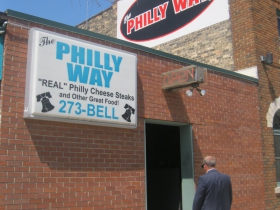 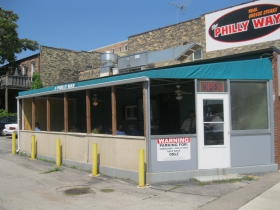 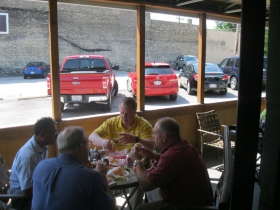 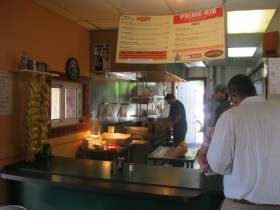