The top race in next week’s election is the Democratic primary for the open position of Wisconsin attorney general, but it’s been a tepid campaign at best. Republican J.B. Van Hollen is stepping down from the post and longtime state representative Jon Richards is the favorite in a Democratic primary that pits him against Jefferson County District Attorney Susan Happ and Dane County DA Ismael Ozanne.

But some Democrats are wondering which candidate has the best chance against Republican Brad Schimel, the Waukesha County District Attorney. As the Democratic insider, the Daily Kos has written, “Richards has met with some skepticism for not being a career prosecutor.”

Ozanne frankly noted this in a candidate debate: “We know as Democrats what has happened the last two election cycles when we have put forward someone that did not have prosecutorial experience to match the other side: we’ve lost.”

The primary is unlikely to be decided by the issues. As AP Reporter Todd Richmond has written, “The Democrats haven’t done much to differentiate themselves. They have all said they would try to push back against Republican Gov. Scott Walker‘s collective bargaining restrictions and wouldn’t defend the state’s gay marriage ban or a Republican law requiring voters to show photo identification at the polls.”

Instead, the race is about lining up your supporters in a low-turnout election. Kevin Kennedy, director of Wisconsin’s Government Accountability Board, has estimated just 15 percent of eligible voters will get to the polls. That’s well below the 20 percent turnout In 2010, when there was a contested Republican primary for governor.

Richards has had the lead from the campaign’s beginning. He has contributors and supporters in all 72 counties and he touts “the longest and most geographically diverse group of endorsements.” His list of 150 current and former elected officials and law enforcement officials includes Democratic Assembly Leader Peter Barca (D-Kenosha), Democratic Senate Minority Leader Chris Larson (D-Milwaukee) and Milwaukee Mayor Tom Barrett. Richards has gained the support of seven different state-wide unions, from the Teamsters to the Wisconsin Deputy Sheriffs Association to the Nurses & Health Professionals. Richards was the first of the three candidates to run online ads and the first to run TV ads. 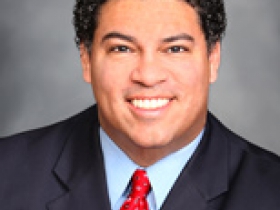 The race initially seemed like it would pit Richards, with the state’s biggest Democratic base of Milwaukee, against Ozanne, with the second biggest base, Dane County.

Ozanne is best-known among Democrats for the open meetings lawsuit he brought in 2011 that temporarily halted Act 10, Walker’s law decimating collective bargaining rights for public workers, but the Supreme Court ruled against his challenge. Ozanne’s campaign has been plagued by financial problems.

Happ is the big surprise in the race. She was the last to enter and her Jefferson County base is small and Republican-dominated, and won’t turn out many Democratic voters. But she got a boost from Emily’s List and has raised more money than expected.

Just in case we weren’t clear she’s the only woman candidate in the race, Happ is given to statements like this: “I’m a mother. I carry a purse.” Yep, she hasn’t been shy about telling a personal story: Happ has let us know she’s a Harley-riding mother who has a concealed-weapons permit and considers herself the Democrat most able to compete for rural votes.

Happ touts the fact she is the first Democrat to serve as Jefferson County district attorney in 70 years. She first won office in 2008 with 56 percent of the vote, exceeding the margin of President Barack Obama in the county by about 6 percentage points.

No matter which candidate wins, he or she will be the underdog against Schimel, who has amassed by the largest campaign chest, with $418,000 on hand as of July 28, more than all three Democrats combined. All three will likely spend every dollar they have on the primary, which will leave the winner far behind Schimel.

If Richards win, he will get hammered for lacking experience as a prosecutor. Schimel may also campaign against Richard’s home base of Milwaukee, as Walker did successfully against Mayor Tom Barrett in the 2012 recall campaign. Images of crime in the state’s biggest city, and a Milwaukee liberal philosophy that supposedly tolerates criminals, can be expected to run statewide in Schimel ads. Richards, I’m guessing, is the candidate Republicans hope will win the primary.

-The race for state Treasurer has gotten little attention, and for good reason; the position is unnecessary and should be eliminated, with its minimal functions absorbed by other state departments. Easily the most in-depth and funniest piece on the race was done by Alan Talaga for the Madison weekly Isthmus. Some of the droller moments:

“The Democratic side of the race is a pretty boring face-off between two Daves. Dave Sartori seems like he decided to run in order to have something to do during his retirement. His Twitter account currently has one follower. Dave Leeper follows the standard anti-Walker talking points… and is light years ahead of Sartori in the Twitter game, with his comparably massive 12 followers on his account.”

Regarding two Republican candidates seeking the seat — Randy Melchert and Matt Adamczyk, Talaga writes: “Each does an impressive job talking about things that have nothing to do with the actual duties of the office. Both candidates tout that they have received (PDF) the highest rating possible from the NRA — because that is highly relevant to the State Treasurer’s duties. As one wag on the Adamczyk campaign’s Facebook page put it: ‘Does that mean you buy cheaper bullets?’”

-The race for Milwaukee County Sheriff continues to surprise. The Greater Wisconsin Committee, which has dumped considerable dark money into the race, is doing a second ad, this time blasting incumbent David Clarke for discouraging citizens from calling 911 in emergencies.

Meanwhile, Clarke is blasting his opponent Chris Moews for what he claims is a lenient attitude on illegal immigration, a charge getting amplified on talk radio. Journal Sentinel reporter Georgia Pabst offered a good summary of the controversy.

-Conservative radio talkers Charlie Sykes and Mark Belling are urging Republicans to vote in the Democratic primary and support Clarke, which suggests they think he’s in trouble. Republicans who do cross over may also vote for Gary George over incumbent U.S. Congresswomen Gwen Moore, but she still seems a shoo-in for reelection.

-Nationally the race for Wisconsin governor, which had been seen as a relative walk for Walker, is increasingly seen as a possible upset for Democrat Mary Burke, which should help her gain more support from out-of-state donors. A typical analysis of the race is this one in the Washington Post:

“While no one was watching Wisconsin has turned into one of the closest governor’s races in the country,” writes Chris Cillizza. “This ad, which Burke is now running, shows that she has a potentially powerful message that goes to the number one concern of every voter: Jobs….This is a very real race.”