The front side of the attack mailer is headlined “Sheriff Spends-A-Lot David Clarke” and features what looks like his hand-written “To Do List” which includes: “Waste taxpayer money… Pay excessive overtime… Cut safety programs” and “Oppose gun safety laws,” all written in capital letters.

On the other side of this droll literature we are told that Sheriff Spends-A-Lot ran a $4.6 million deficit, spent money on flatscreen TVs, exercise equipment and radio ads and disbanded the anti-gang squad and gun violence task force. Among other sins.

While exaggerated for comic effect, the central idea here, that Clarke is anything but a fiscal conservative, is clearly true, as I’ve previously written. No county department has seen its budget grow more than the sheriff’s over the last 12 years.

The return address for the mailer is the Greater Wisconsin Committee, the liberal advocacy group that has done many ads over the years. The group is also spending $400,000 for anti-Clarke ads on Milwaukee TV and radio stations, according to WisPolitics.com, and these are hammering a similar message to the mailer. The ads began airing last Friday. According to Journal Sentinel columnist Dan Bice, “Greater Wisconsin has purchased nearly $70,000 worth of time each on WISN-TV (Channel 12) and WITI-TV (Channel 6) and more than $60,000 on WTMJ-TV (Channel 4) and $50,000 on WDJT-TV (Channel 58)… the TV spot is set to run 166 times on Channel 4… and 96 times on Channel 58.”

As with right-wing advocacy groups, Greater Wisconsin can run thinly- disguised campaign ads that don’t expressly tell you how to vote, but instead tell you to “call David Clarke” and complain, just a week before the election. And because it’s not “express advocacy,” Greater Wisconsin can accept anonymous donations.

Which of course raises the question, who is out to get Clarke? I asked Clarke’s frequent nemesis, Milwaukee County Executive Chris Abele whether he paid for the ad and Abele declined to answer the question, which is a pretty revealing response. Given that Clarke runs as a Democrat while espousing far-right views and supporting all kinds of Republicans, many Democrats would have reason to target the Sheriff. But no one has been in conflict with him more often than Abele.

As to who created the ad, I immediately thought of long-time Democratic strategist Bill Christofferson, who ran Clarke’s first campaign in 2002, and quickly became disillusioned by his ever-more Republican views. Christofferson has been doing penance ever since, writing anti-Clarke blog posts among other things. Christofferson also spent years as the media buyer and strategist for Greater Wisconsin. Did he create these ads?

Via email, Christofferson told me he hasn’t done Greater Wisconsin’s media since 2006. But the group’s federal tax form for 2010 says he was paid $160,000 that year to handle their media (but nothing in 2011 and 2012). When asked about this, Christofferson said he came out of retirement in 2010 only as the group’s media buyer, but hasn’t written, edited or produced any ads for Greater Wisconsin since 2006.

Will the ads have any impact? Clarke has never faced strong opposition before, and these ads effectively evoke his increasingly cranky political style.  And they have come so late in the election that Clarke may have difficulty responding.

On the other hand, his opponent Chris Moews isn’t exactly a household word in Milwaukee. And conservative talkers Mark Belling and Charlie Sykes are urging, nay begging their Republican listeners to cross over into the Democratic primary to vote for Clarke. This could be a very close election. 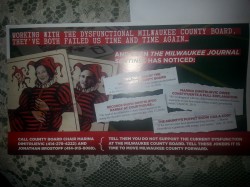 Meanwhile, another droll mailer has targeted Marina Dimitrijevic and Jonathan Brostoff, two of the four candidates for the Milwaukee County Board, who are both pictured wearing joker outfits from a deck of cards. The header tells us that “Working with the dysfunctional Milwaukee County Board, they’ve both failed us time and time again.”

Dimitrijevic is a longtime board member and current board chair while Brostoff was merely a staffer. The equality suggested here is bizarre, all the more so since the mailer has only quotes from the Milwaukee Journal Sentinel raising negative questions about Dimitrijevic and not one word about Brostoff.

The mailer is not some cheap knockoff so it required the support of someone with money. The return address is from a group called Forward Milwaukee County, whose registered agent in its state incorporation filing is Tom O’Day, a Republican who once worked for state Sen Alberta Darling (R–River Hills). The treasurer of Forward Milwaukee County is Joe Rice. Both O’Day and Rice are members of the North Shore Republicans executive committee.

Milwaukee County First ran ads supporting the reduction of county board members to part-time status, and Milwaukee businessman Sheldon Lubar contributed to and helped raise money for this campaign. But Lubar, via email, said he’s not connected with this effort: “Be assured, I would never fund anything like that,” he says.

Rice is a former county supervisor who was redistricted out of his district by board members who clearly hated him. So he would have reason to go after Dimitrijevic and even Brostoff, who worked for then-Supervisor Chris Larson, who supported the anti-Rice plan.

But where did he get the money for it? Abele, who backs Adams and is no friend to Dimitrijevic, flatly denied he had anything to do with the campaign, in contrast to his coy answer regrading Clarke. It does seem unlikely Abele would go after Brostoff, as they both have Democratic friends in common.

One politico in town tells me that Joe Williams of the Democrats for Education Reform (DFER) approached a wealthy local donor about donating to such an ad.  DFER supports charter schools in particular, and also supports more accountability for public schools and choice schools, Williams told me via email. They would be simpatico with the views of Dan Adams, the one Democratic candidate for the 19th assembly who supports any schools that succeed, whether public, charter or choice, as Adams has put it.

Williams offered a coy response as to whether his group funded the ad. “Our team has been super impressed with Dan Adams as a candidate,” he wrote me, “but we haven’t yet put resources behind any ads in his race. If anyone is looking to help support that kind of effort, it probably wouldn’t take more than a beer for us to say yes. He’s a great candidate.”

DFER’s Wisconsin chapter was run for a while by former state Rep. Jason Fields (D-Milwaukee), a school choice supporter and later run by his brother Jarret Fields.

Jason Fields was defeated by anti-voucher Democrat Mandela Barnes, with support from the Dem Team, the group created by Larson.  Brostoff also worked with the group so Fields would have reason to go after him in an ad.

What’s ingenious about the ad is that it exploits the chronic disgust of Milwaukee voters with the county board, but uses it to tarnish two Democrats seeking state office who happen to oppose school choice. Whoever paid for it, the intent seems to be to elect Adams. He, meanwhile, has sent out a mailer touting his background as a prosecutor and promising to “confront Milwaukee’s gun violence problems head-on by preventing dangerous criminals from obtaining firearms illegally.”

Williams, by the way, is a former reporter (and a good one) for the Milwaukee Journal Sentinel and later the New York Daily News who covered education for both papers. He now runs DFER, which is a political action committee that can spend on ads, Education Reform Now, which is a standard non-profit that does advocacy, and Education Reform Now-Advocacy, a 501-c-4 that can do lobbying. He is a full service administrator who earns at least $224,000 according to the groups’ federal tax forms. Those raffish days of living on a reporter’s salary are long gone.

He now lives in New York City, where DFER is based and according to his bio, “his children attend the city’s public schools.”