A Love/Hate Affair With Danceworks

Their latest show, Art to Art, ranged from great to pretty terrible.

I had a complicated relationship with Danceworks’ Art to Art, staged at the Danceworks Studio Theatre on Friday August 1 through Sunday August 3.

I left the performance feeling like a disillusioned lover – the show had such promise and started so strong! It was like love at first sight yet by the end my affection had dissipated, the later faults of the show too hard to ignore.

But let’s reflect on the good times, shall we? Danceworks’ annual collaborative Art to Art performance led off with Mauriah Kraker’s “fever/hiways,” a solo performance accompanied by sound design from Kimberly Lesik and Andres Guzman. I’m beginning to believe Kraker can do no wrong. She’s magnetic in everything she does (she calls Wild Space Dance Company home) and has a gift for performing in a powerful, yet casual manner, as if to say “I am this good but let’s stay humble, yeah?”

“fever/hiways” saw Kraker in a darker role than usual, gliding and writhing around the studio theater like a gargoyle released from its post. The sound design was well-matched, carrying Kraker through the piece with haunting female vocals and a subtle dub-step. Kraker’s control on stage is what’s most impressive – she can be in the throes of a complicated set of steps, never slowing, moving from balancing tricks to spins and leaps and dropping to the floor, yet never loses authority over her creation. Even if the tone of the piece becomes frantic, her body language is always that of a composed, creative dancer.

Next was “See Me See You,” choreographed and performed by Madeleine Schoch and accompanied by spoken word performer Ryan Hussey. The note in the program is particularly useful here – a quote from the late Ed Burgess: “We are dancers. We have agreed to be seen.”

With this disclaimer in the backs of our minds, Schoch appeared center stage in a simple white dress…and stared at all of us. For quite awhile. I should’ve been counting, actually. Something uncomfortable like that can feel like it’s going on forever, and I would guess she did it for a good 60 seconds – which may as well be 60 years.

Yet, as the piece unfolded, I loved the idea more and more. For awhile, Schoch continued in her slow, silent performance: kneeling while staring at us. Sitting while starting at us. Lying down and staring at us. Turning her back to us for a moment’s relief – then turning around and staring at us. But eventually, her motions became more dance-like, and Hussey’s spoken word accompaniment kicked in (not recorded – he was speaking from the last row of the audience and did a wonderful job).

The commentary was on that fish-bowl feeling that all performers are sure to experience. Hussey commands “Pick it up. Flip it over. Set it down.” at varying speeds and intensities, as Schoch continues in her dead-eyed way, with the dance getting bigger and bigger. Sometimes the narrative gets weird (read: great) as Hussey shouts about snow and snowmen and snow globes and the Kübler-Ross model and predictable patterns. It was delightful.

Unfortunately, here’s where things fell apart. I should mention at this point that this year’s Art to Art had a “recycle” theme – subtle in Kraker and Schoch’s performances, but obnoxious in the following three.

Take Beth Ratas and Anja Notanja Sieger’s “scene///unseen,” with Ratas performing her choreography while Sieger stood at the front of the stage, manning a projector. Ratas primarily squirmed around on the floor, while Ratas took myriad objects (crumpled plastic, bubble wrap, a pom pom?) and projected them onto the backdrop screen.

There are several reasons why it didn’t work: Ratas’ choreography was not innovative or eye-catching in any way. Sieger was literally just standing there the whole time – she added nothing to the performance, and blocked some of the audience’s sightline. You could not really tell what was being projected – the materials were out of focus and simply not interesting. There was no music, which can work in certain dance pieces but only if you’ve earned the silence. You cannot do something weird just for the sake of doing something weird.

The next work was entitled, “For total victory, we must make total sacrifice,” featuring choreography by Kyra Boprie and Chad Nelson and video by Stephen Jenich. Performers included Kaitlyn Hribar, Maddie Krawczyk, Ava Lemke, Chad Nelson, Grace Osgood, Clarissa Tiedke and Alison Welch. Here was a piece that certainly piqued your interest – the stage was strewn with colorful recyclables, Nelson has long, enormous dreadlocks, and the six ladies came out dressed as some sort of future-space beings.

But the piece suffered from far too many ideas and questionable execution. So, are we in a future-space dystopia? What is that thing Nelson is dragging around on his foot? What is the point of these girls being dressed like this? Why is there so much social commentary in the accompanying video?? Are we supposed to feel really mad about polar bears living in zoos and fast food restaurants and out of control garbage and war, all at once, while these people move frantically in front of the video?

Art to Art closed with an underwhelming “Disconnect Revive,” with choreography created and performed by Cari Allison and Zach Schorsch and video from Tricia Breimon. Allsion and Schorsch didn’t seem to have any chemistry, or much interest in what they were doing. Their music selection from a group named Plastikman was monotonous in the worst way, and the video was merely out-of-focus shadows of dancers essentially not-dancing. Allison and Schorsch moved around with no discernible plan or vigor, as if they’d just woken up and discovered themselves on stage with a task at hand.

I guess two out of five isn’t bad? 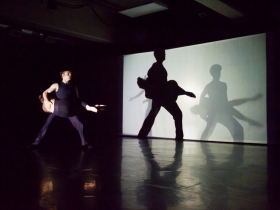 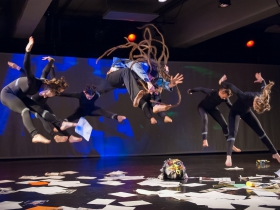 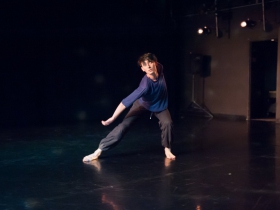 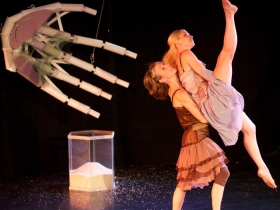 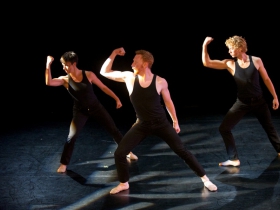