Uber and Lyft Legalized in Milwaukee

Taxis for anyone who wants to drive one. Uber and Lyft are legal. And someone will probably sue the city to stop this. 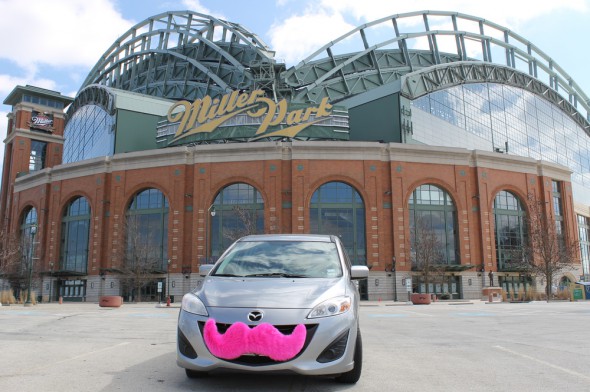 The Pink Mustache Arrives in Milwaukee

The taxi cab cap is gone, Uber and Lyft are legal, and the city will almost certainly get sued. Following a unanimous 15-0 vote by the Common Council today, new taxi cab regulations will go into effect once the measure is signed by Mayor Tom Barrett. As part of making “network companies” legal, as the city is describing companies like Uber and Lyft, the city needed to remove the cap on permits. That move seemed all but inevitable in the coming years following a decision by a Milwaukee County judge striking down the cap. The city with one cab for every 1,850 residents is about to have a lot more cabs available.

Alderman Robert Bauman was the champion of the legislation, as he was with the prior legislation that raised the taxi cap by 100. But this time, he was joined in support with eight other sponsors, including new Common Council President Michael Murphy (others were alders Russell Stamper, Joe Davis, Tony Zielinski, Jim Bohl,  Jose Perez, Nik Kovac and Willie Wade). Murphy is the only member still serving from the 1991 council that approved the taxi cab cap, something he has long made clear he opposes.

The legislation is intended to protect the public’s interest, while leveling the playing field for taxis and network companies and granting a straight-forward permit process for anyone that wants to provide rides.

Since the legislation was introduced in March, Uber and Lyft have lobbied against it. Their position has seemed odd given that the firms were operating illegally in the city to-date with only the good graces of the city stopping a crackdown. But the Milwaukee discussion comes in the context of a nationwide push by Uber and Lyft to oppose any local regulations.  The firms want to conduct their own background checks to approve drivers, as well as having no licensing permits or costs to their drivers. In effect, they want a completely unregulated market.

Bauman compared this to McDonald’s or Burger King being able to conduct their own health inspections. “That’s just not how protecting the public’s health, safety and well-being works,” he said.

Ironically, the legislation Uber and Lyft have opposed would never have been possible without them. Both companies entered the market earlier this year, without permission or public meetings. They successfully forced the issue and caused the Common Council to move in a way to legalize their services following the public support for them. The perfect storm they helped create was only aided by the 1,706 applications submitted for the 100 new taxi cab permits.

Uber and Lyft did succeed in delaying the legislation for at least one meeting cycle in June. Alderman Ashanti Hamilton had a failed motion to send it back to committee at the June 24th Common Council meeting (6 ayes, 9 nos), but then motioned to hold it in council, which requires only three votes (he got 4 including himself). Alderman Willie Wade and Alderwoman Milele Coggs spoke of wanting more time on the matter, with Wade making an impassioned plead for more time. This clearly struck a nerve with Bauman and others, and the June meeting became testy. “This measure has probably received more debate and discussion and public testimony than any issue we have debated in the past ten years,” Bauman had complained. He ticked off ten meetings held on the topic, including the three standing committee meetings. He also noted that the legislation was introduced in March, giving plenty of time for review.

Despite Hamilton’s move to delay the issue at the June 24th meeting, a suggestion he made at the Public Works Committee was added to the ordinance by an amendment by Alderman Bauman in an attempt to please all parties. Provisional permits will be created to allow applicants to immediately begin driving passengers, eliminating the fear of a bureaucratic delay from the process. In addition, Hamilton had three amendments added to the legislation this morning, all of which received support from Bauman. Hamilton’s amendments sync up permit cycles, allow DPW to streamline the inspection process and eliminate the requirement for a defensive driving course.

The approval today was not without significant floor debate, what Bauman called a “sausage making process.”

It seems almost certain that once the ordinance is put in place, one of the affected parties is going to sue the city. My money would be on someone affiliated with the existing taxi cab industry. Ironically, the organization that formerly sued the city, the Institute for Justice, has offered to help the city in their defense.

The Institute for Justice had sued the city and won a judgement that struck down the cap, which pushed the city to raise the cap by 100 permits (although Bauman had introduced legislation to abolish the cap). Now it appears that one of the taxi cab groups that represents the existing owners will file suit against the city.

The legislation will go into effect September 1st.

UPDATE: Alderman Bauman mentioned in an email to Urban Milwaukee that the emails directly from Uber didn’t start arriving until after they voted.

4 thoughts on “Eyes on Milwaukee: Uber and Lyft Legalized in Milwaukee”