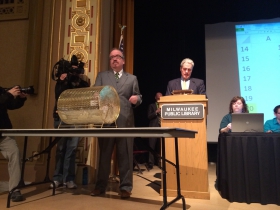 Surprisingly few were in attendance for the taxi cab permit lottery held at Centennial Hall this morning. Despite having 1,706 applications submitted for 100 permits, less than 200 people were in attendance. Those applicants that did show up, though, were in good spirits, especially if they heard their name called. Clustered in groups throughout the venue, many of today’s taxi cab drivers waited to hear if they would become taxi cab owners.

Names were picked from a large tumbler by City Clerk Jim Owczarski. He passed them to the master of ceremonies to announce the name and lottery number. From there three city staffers recorded the results, which were displayed to the audience via a projector.

All of the applicants were listed out on two massive boards in the back of the room. The names were, however, sorted alphabetically by first name, which made it difficult to decipher any family members applying for licenses in groups.

The suspense didn’t end as the 100th name was drawn. The waiting list will be of great importance moving forward, with new permits selected from it. This resulted in the city drawing and announcing all 1,706 names (a process that might still be on-going). Yours truly left after the 200th name was drawn, with Alderman Robert Bauman stepping down as the master of ceremonies to be replaced by Milwaukee Common Council Public Relations Supervisor staffer Dusty Weis. Bauman managed to read 200 names in just under a hour, so Weis should finish around 7:30 p.m. tonight with any luck.

Why were so few in attendance? It’s worth noting that there were not 1,706 individual applicants. Each applicant was allowed to submit up to two applications. While not everyone did that (it was $100 per application), many did. Add in the fact that many of the 320 cabs presently licensed to operate in the city may have been on the road, and that other applicants may have other jobs and were at work, and you can understand why there were so no shows. In addition, there were names on the list who were seeking the permit as a way to expand their business empire (Alaa Musa of Casablanca is one such applicant) and may not have felt the issue was crucial enough to show up for the drawing.

But hey, Urban Milwaukee was there, or least till the 201st name was read.

What’s next? Once the permits are awarded, recipients will have 60 days to have a vehicle certified. If they fail to do so in that window, the city will move to the waiting list. The police will also do a background check of every winning applicant.

While I was interviewing Bauman afterwards, an applicant walked up to thank him for his efforts to break the “monopoly.” He had a number of lottery numbers written down on a sheet, and he wasn’t the only one. Suffice it to say, with the stakes so high, applicants were doing anything they could to grab one of the 100 permits.

In the lobby outside, people could be heard complaining that 100 was too small a number, but I didn’t hear one complaint about the process. The city at least has that over David Stern and the NBA.

How long will it take for the first of the new cabs to hit the streets? Bauman predicts it could be as early as May. 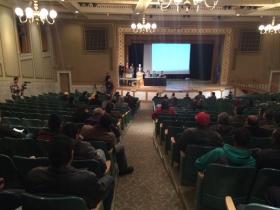 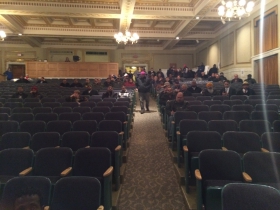 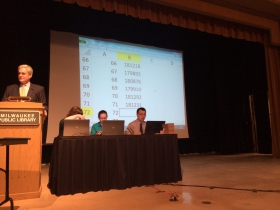 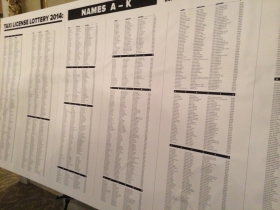 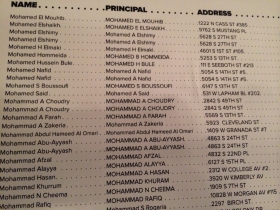 UPDATE: Dustin Weis informs me that after 500, it was switched to reading numbers only. This allowed him to read 6.88 cards/minute and finish around 3:45.

One thought on “Eyes on Milwaukee: Taxi Cab Lottery Has Light Turnout”