Gimbel Gets Reappointed to Wisconsin Center Board

Will continue after 3 decades as board chair! Did mayor and governor swap appointments to make this happen? 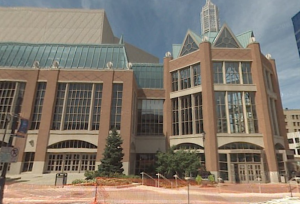 The situation on the Wisconsin Center District board of directors just keeps getting stranger. The board oversees the downtown convention center, the old U.S. Cellular Arena and the Milwaukee Theatre, but as I’ve previously reported, its leadership was adrift, with one third of the seats on the 15-member board either vacant, held by unqualified individuals, or held by persons whose terms have expired.

That included board chair, Atty. Franklyn M. Gimbel, who has served in that position since the WCD board’s very first meeting in 1994, as a 3-year appointee of Governor Tommy Thompson. Successive governors have reappointed the wily 78-year old power broker ever since. When his term expired in May, 2012, and Governor Scott Walker took no action to appoint him, Gimbel just kept on serving as chair. Now, that’s public service! As his biography notes, “helping people is Frank’s passion.”

Indeed, Gimbel went ahead and brokered another deal for the Wisconsin Center, whereby UW-Milwaukee bought naming rights to the Cellular arena for the next 10 years for $3.4 million, a deal that may greatly change the politics involving the push to build a new NBA arena, as Bruce Murphy has reported.

But we’ve now learned that Gimbel has been reappointed to the board by Mayor Tom Barrett. That move seems bizarre, even by the rather lax standards by which WCD board appointments happen — or don’t. For starters, Gimbel has been a gubernatorial appointee for 20 years, but it appears that Walker didn’t want to reappoint him. So instead, he’s now becoming a mayoral appointee.

While Walker declined to reappoint Gimbel, he instead appointed James Kaminski to serve another term on the board. This is rich, as Kaminski is the former head of the City of Milwaukee Department of Public Works, who retired from that position to become a consultant, and was a mayoral appointee to the WCD board. Like Gimbel, he is considered a member of the city’s Old Guard, and when it comes to the WCD, what might be dubbed The Gang that Just Won’t Quit. Even though Kaminski’s term expired in 2009, he kept serving, like Gimbel. But now he has been re-legitimized by Walker, in what looks like a curious bit of horse trading with his old nemesis Barrett.

Via email, Barrett’s chief of staff Patrick Curley told Urban Milwaukee that Barrett promised to reappoint Gimbel if Walker chose not to, and has lived up to that commitment. “We recommended to the Governor’s staff that they take a look at appointing Jim Kaminski,” Curley added. Certainly sounds like the appointments were swapped, though Curley denies this.

So all can rest easy that the geography here is so well worked out, but may wonder why neither Barrett nor Walker offered any statement explaining why either person’s background, credentials or temperament made them a good choice for this position. The Gimbel reappointment, in particular, is raising eyebrows among politicos, as it has been rare to see someone serve eternally as board chair, even in the older, slower days of this fair city. Gimbel has not only served as board chair since the WCD’s creation in 1994, but served for years as chair of its predecessor organization, the MECCA board, going back to the mid-1980s. Moreover, one source informed Urban Milwaukee that Barrett had told Gimbel he was opposed to reappointing the downtown lawyer, though Curley’s statement suggests otherwise.

The appointment must come as a disappointment to Andy Nunemaker, who had been appointed to the board by County Executive Chris Abele. I wrote in November that the appointment was illegal, since Abele’s appointee had to be a county resident from outside the City of Milwaukee, and Nunemaker was a city resident.

The simple remedy here, would have been for Barrett to choose Nunemaker, a House Confidential Honoree, as his appointment. Nunemaker said he had hoped this would happen. Nunemaker is in his 40’s, has tremendous energy, and has raised his profile considerably over the years. Instead, Barrett chose Gimbel to continue at a time when an expanded convention center and new NBA arena have both been proposed, both of which might involve the taxing power of the WCD.

Also new to the board is attorney Jason W. Allen of Foley and Lardner, appointed by Abele to replace Nunemaker. It appears he lives in Fox Point (on Allen Lane, no less), and would therefore qualify for the position, being a county resident outside the city.

Meanwhile, insiders are predicting Gimbel will prevail on his fellow board members to vote to reappoint him as board chair, pushing Gimbel into his fourth decade in this position.

For those keeping score (and it’s not easy), the Wisconsin Center District Board of Directors now consists of:

3 thoughts on “Plenty of Horne: Gimbel Gets Reappointed to Wisconsin Center Board”