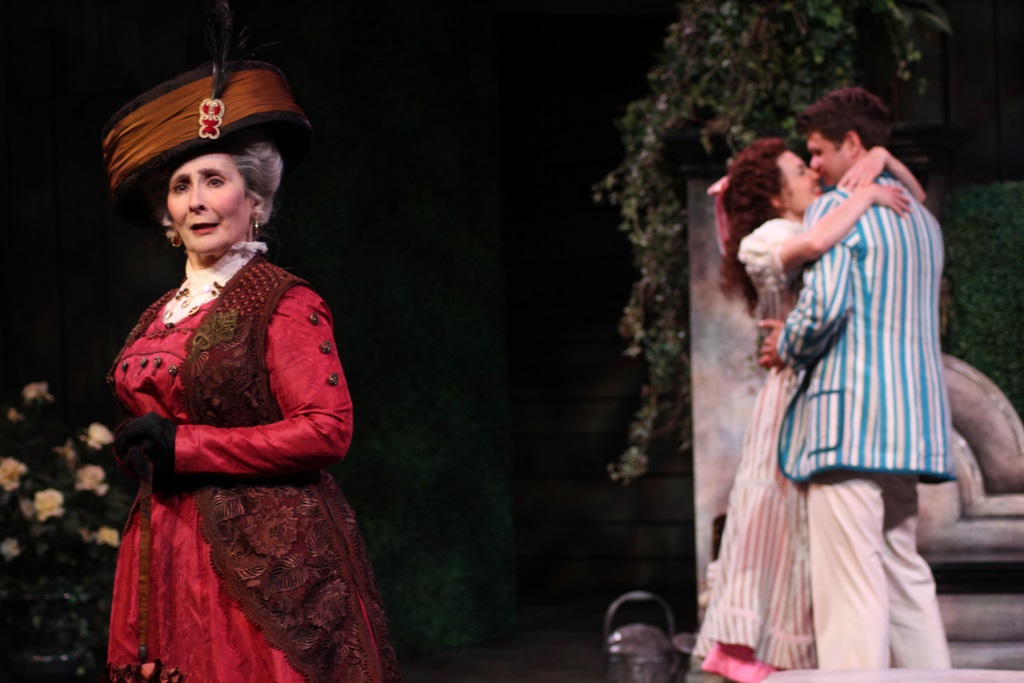 Sarah Day, Kelsey Brennan and Marcus Truschinski in The Importance of Being Earnest, 2014. Photo: Carissa Dixon.

The Importance of Being Earnest is the crown jewel of Oscar Wilde’s stage output, unfathomable, inexplicable and inescapably wondrous.

Lighter than air, it so wickedly dissects British class and mores that it is universally acknowledged as the epitome of social satire and comedic structure. Its perfectly phrased epigrams are often illogical in any relation to the outrageous plot — yet somehow essential to the style and story. All can envy the comedy but none can emulate.

The American Players Theater is playing with and sometimes playing way around this delicious comedy at its outdoor On the Hill theater near Spring Green.

Such playing around is not wildly off course since Earnest has gone through many incarnations over 119 years. Theaters relish its tight structure yet directors toy with it, but usually carefully to preserve that mystical balance among elegance, farce and social commentary. Thus, outstanding male actors have played Lady Bracknell straight (pun intended), winning awards and acclaim (among them William Hutt, the original Canadian creator at Stratford, Australia’s Gregory Rush and England’s Brian Bedford). The plot has inspired musicals (Ernest in Love) as well as riffs on Wilde’s manner and meaning from such accomplished dramatists as Tom Stoppard in Travesties.

Still, a feeling of something off-kilter is heightened at APT. There are wonders of accomplishment side by side with unintended artistic pratfalls.

The plot is delirious, but it is not the motor, just the motives a company must cast dice around. Its young lovers are desperate in their outer garb and manners to emulate social conventions yet more desperate to escape the marital dictates imposed with ridiculous superiority by Lady Bracknell. That scenario overlays a giddy dash to deceive tradition, devour muffins, explain wealthy Jack Worthing’s apparent birth in a handbag — and mainly drop bon mots and skewer Victorian attitudes.

Director William Brown, rightly choosing language as the center of this production, uses voice and text coach Sara Becker to elevate the cast into mastery of the cadence, pace, diction, drawn-out vowels and pinpoint landing of Wilde’s wit and pith. Here this production is often impeccable – and I mean as good with language as world class companies I’ve seen over four decades.

Yet Brown’s physical comedy choices and interpretation of key scenes – such as the famous garden tea party confrontation of Gwendolen and Cecily, originally constructed as a “word clawing” battle of wills that skirts being a down and dirty catfight — drives the edges of Earnest toward burlesque and requires manipulative staging. It seems deliberately to be breaking the fantasy world and period motif of the work.

The break may start at the beginning — in Algernon’s elegant bachelor London flat where an incongruous huge rectangle of modern art hangs center stage, drawing no interpolated remarks from the assembling cast. They merely glance at it from time to time as if shocked through lorgnettes. (Indeed, Wilde was a rebellious aesthetic champion of modernism.)

Back in 1895 when first staged, that abstract art’s presence in gaudy Algy’s busy social flat was barely possible. In outdoor theater it’s rather garish. But could it be an offhand comment – as some assume Algy’s flamboyant attire to be — on Wilde’s socially hidden homosexuality? Is it even more likely a foreshadowing of Travesties, which carries the Wilde motif into 1917 and the Dada art movement and will be performed later this season by the same cast, director and costume designer at APT?

Two uncomfortable “Earnests” seem to be existing cheek to jowl in the production decisions. Of course two Earnests also exist in the play itself.

Jack is infatuated with city snob Gwendolen, who thinks he is named Earnest, and he needs to endear himself to her “Gorgon of a mother,” Lady Bracknell. Algy, who seems to succumb primarily to pleasure and deception, has been seduced by the charming innocence of country heiress Cecily, who also thinks his name is Earnest and has long loved him from afar.

But handle with care, since this is a romance of those “in love with love” and Wilde’s play is carefully constructed around Victorian characters working secretly to circumvent the standards while adhering to the protocols. (Wilde’s subtitle is “A Trivial Comedy for Serious People”). He is encouraging romance to be treated with amusement, but not with the intimations of lust and broad clinches that Brown etches in. 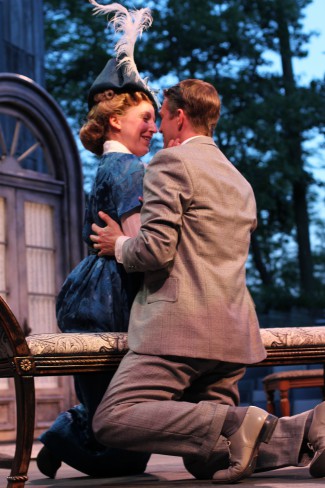 Cristina Panfilio and Matt Schwader in The Importance of Being Earnest, 2014. Photo: Carissa Dixon.

Cecily is meant to have shades of the girlishly giggly but Kersey Brennan is made to play her giggly side excessively, prancing and posturing absurdly in her affectations to be stylish. As Gwendolen, Cristina Panfilio rules her dialog with slyly acid inflections and elongations – it ought to be the first place entry in her acting portfolio. Yet in that bizarre tea party staging she is reduced to what vaudevillians called a “spit take” to generate a laugh. What worked for Lucille Ball doesn’t work for Gwendolen.

Another curious director’s choice circles pastor Chasuble and tutor Miss Prism. Their budding romance should be conveyed in flirtatious glances and the pedantic suggestiveness Wilde intended, but is gussied up with heaving looks and eye rolls from Tracy Michelle Arnold and John Pribyl.

Precision and control are important with Wilde, and much of the humor comes from the tension between human urges and heeding the financial and decorum demands of the ruling society. The men have a touch more freedom in their bouts of insults and camaraderie because a bit of madcap “boys will be boys” is acceptable if the libido is under control. (Perhaps their mania for muffins is Wilde’s subtle substitution for more heavily repressed urges in Victorian England.)

Much of the humor of Matt Schwader as Jack stems from that tension. Outside those few oversteps that break the sexual tension, he excellently maintains an ever-so-proper agitation and distress as he berates Algy, pursues Gwendolen and seeks handbag revelations. But the crowd pleaser is Marcus Truschinski as Algy since Wilde has given him the wittiest lines, the sense that his real love in life is himself and an attitude of unshakeable confidence — all embraced by the actor with high energy and grinning asides.

Truschinski’s Algy is a bit too eager to break the fourth wall to play with and to the audience. It’s a bit over the top, letting the audience in rather than just overhearing. But then again this is a play of constant word duels that any audience would love be considered smart enough to be part of.

Sarah Day relishes the pompous costuming and outlandish marital aphorisms of Lady Bracknell, reflecting another amusing Wilde decision about who gets the most maneuvering room. As long as they are expertly groomed and ostentatiously turned out, ogres like Bracknell and wits like Algy are allowed to reveal themselves in unrestrained comedic candor.

This is a production radiating expertise with words while beset with strange excesses in the search for behavioral stylings. And hardly the last word on Earnest; theater artists will have centuries more to find even better ways to go Wilde.

The Importance of Being Earnest Gallery 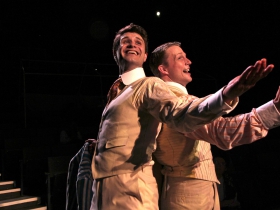 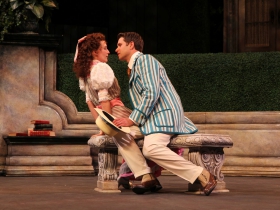 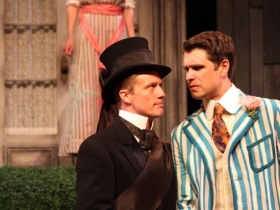 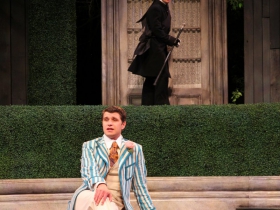 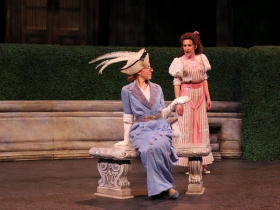 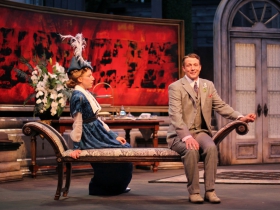 0 thoughts on “Theater: APT’s Earnest A Bit Too Wilde”