How UWM Deal Will Affect the Bucks

UWM’s naming rights for old U.S. Cellular Arena could change where new NBA arena is built -- and what happens to Bradley Center. 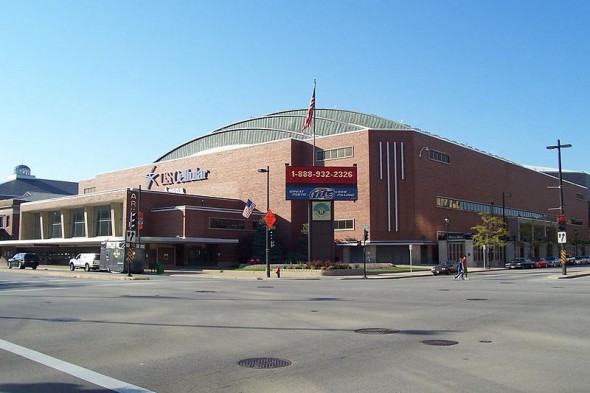 It was former Milwaukee alderman Fred Gordon who once dubbed Frank Gimbel “Mr. Clout.” Gimbel, the attorney and longtime board chair of the Wisconsin Center District, has wielded power over Downtown for decades, given the WCD’s control over the convention center, the old U.S. Cellular Arena and the Milwaukee Theatre. Remarkably, Gimbel continues to hold the whip hand over the WCD, even though his appointment to the board expired in May 2012, as Michael Horne has reported. And Gimbel recently used his power to cut a key deal with UW-Milwaukee that could have a lot of reverberations.

At first glance the deal might seem pretty straightforward. U.S. Cellular decided not to renew its deal for naming rights to the 1950s-era arena that was the original home of the Milwaukee Bucks. And so Gimbel contacted university officials, given that the UWM Panthers have played in the arena for years. UWM agreed to buy naming rights to the arena for a cost of $3.4 million over the 10-year period running from 2014 to 2024, with an option to extend it to 2029.

Gimbel accomplished a lot with this deal. For starters, it assures that UWM, which had once flirted with building its own basketball stadium on campus, stays at the arena, generating rental income for the facility. It also assures that UWM isn’t tempted to switch to the Bradley Center, after it loses the Milwaukee Bucks to a new arena.

But it also puts Gimbel in a better position when the talk comes of tearing down an arena. Both Gimbel and Steve Costello, president and CEO of the BMO Harris Bradley Center, have conceded that the city won’t need three arenas, and once a new NBA arena is built for the Bucks, one of the older ones will have to go. In the eyes of the public, the much newer and more prestigious Bradley Center might be the logical candidate to save.

But that calculus suddenly looks different now. While the Bradley Center would be a white elephant that no longer served as the home of the Milwaukee Bucks (nor the Marquette Golden Eagles, which would probably move to the new arena), Gimbel’s venerable arena now carries the name of the UWM Panthers and you’d be taking away its home.

“That was an important factor in our discussions on naming rights,” Gimbel admits to me. “It would be harder to tear down the arena.”

It also buttresses Gimbel’s response to Department of City Development Commissioner Rocky Marcoux, who has proposed that the old arena and Milwaukee Theatre be torn down to provide space for a new Bucks arena.

Gimbel notes that that U.S. Cellular arena has typically generated more income than expenses and returns that surplus, plus the naming rights money, to help support the WCD and convention center. Without that money, taxpayers would be on the hook to provide more support.

But now Gimbel has an additional argument: this arena is the temple of Panther basketball, Mr. Marcoux, and you are now attacking the state’s second biggest university. All of which makes it more likely a new NBA arena would be built north of the Bradley Center, where the Bradley Center has been buying up land, and more land is also available in the Park East corridor.

For UWM, the deal helps solidify their ongoing transition into an expanding campus with satellite locations in the city and will “further position UWM as Milwaukee’s University” as UWM officials noted. Marquette’s basketball team is likely to move to the new NBA arena; they have long helped subsidize the Bucks who get a chunk of the revenue generated by Golden Eagle games at the Bradley Center, and MU always plays nicely with Milwaukee’s power structure, which will want the subsidy to continue.

The competition between Gimbel and the Bradley Center goes back decades. Gimbel ran the old MECCA board, which originally ran the convention center, arena and auditorium, and after the Bradley Center was built, he was forced by city officials to sign a 12 year agreement giving the Bradley Center total control over his arena’s bookings plus 15 percent of its gross rental fees during that period. Milwaukee taxpayers had to make up the difference for the money lost.

Some 15 years later, Gimbel struck back. Bradley Center officials wanted to build a new mid-sized 4,500 seat theater to book touring music and theater shows, in hopes it would eventually spin off revenue to support the Bucks. It’s open to question whether it would have worked, but it certainly would have taken business away from Gimbel’s arena and auditorium, so he quickly moved to renovate and modernize the ancient auditorium, turning it into the beautiful Milwaukee Theatre. (I wrote about this in detail for the Journal Sentinel.)

The old arena and Milwaukee Theatre use union labor, while the Bradley Center doesn’t. Odds are the Bucks’ new owners will want a non-union facility and will want total control over it, to assure they maximize and grab all revenue. How that will work when the facility is tax supported remains to be seen.

Meanwhile, a new report shows what some suspected: the Milwaukee Bucks are a profitable team. According to a confidential memo the NBA sent to all 30 teams in early June and reported on by Grantland,  the Bucks are projected to make $14.8 million in basketball-related net profit for the 2013-14 season, due to revenue sharing. “Milwaukee will get about $18 million from revenue sharing and $3 million more from luxury tax payouts, easily eclipsing the $6.5 million the team lost on its own account.”

This will add difficulties to those arguing the Bucks need a new, tax-supported arena because it is not a competitive team. Now that the NBA has moved toward more revenue sharing (though unfortunately still far short of what the NFL does), the Bucks are profitable even when playing in an outdated facility like the Bradley Center. Now it’s more a matter of how much more profitable, and more competitive the long mediocre team could become in a state-of-the-art arena.

-Businessman Ron San Felippo is involved in an effort to transform the Grand Avenue Mall, and has suggested the convention center might want to use some of the space. Gimbel seems lukewarm as to its workability: “I’m like Harry Truman. Someone would have to show me,” he says.

-And just how useful is the Bradley Center? “It’s unfortunately a museum-quality facility,” says Gimbel. “It’s a hockey arena so the sight lines aren’t good, the seats aren’t good.” Whereas the newly renamed UWM Panther Arena, he notes, is a vintage classic “a great arena” offering “a great experience” for patrons. “Fans love it.” No one can say Gimbel isn’t frank.

27 thoughts on “Murphy’s Law: How UWM Deal Will Affect the Bucks”