Lessons from the Public Market

Could its success provide a model for the Grand Avenue Mall? 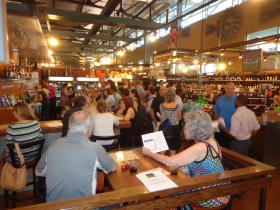 If you wanted some measurement of how badly the Grand Avenue Mall has declined, consider the fact that its owners are seeking an opening bid of $4.75 million in an auction they’ve discussed having. As recently as 2005, it was sold for $31.7 million and its value by then was probably far below its late 1980s peak.

The Grand Avenue is “a white elephant,” says real estate developer Ron San Felippo. “It needs to become a success if that downtown neighborhood is ever going to be turned around.”

San Felippo has joined an effort led by Godrey & Kahn attorney Stephen Chernoff to use a non-profit group — the WAM DC LLC formed a year ago with the goal of revitalizing western Wisconsin Ave. — to purchase the Grand Avenue Mall and transform it, drawing on the success of the Public Market.

“Ron has been instrumental in turning that around,” says Chernoff. “I think his expertise will be very helpful.”

San Felippo became the key person overseeing the Public Market in 2007, working with the Third Ward Business Improvement District and the Historic Third Ward Association. At the time, the market was floundering. Today, it’s a big success. So how did that happen and what might the Grand Avenue learn from this?

“The original intent for the Public Market was to have pure approach, a fresh-ingredient market with little you could buy that was packaged or prepared,” San Felippo notes.Thus, the St. Paul’s Fish Market couldn’t serve sit-down meals.

Under the new regime they could, and that became a big traffic generator. A new wine retailer, Thief Wine, offered sit-down wine tastings that became another draw. The Green Kitchen, offering salads, often has a backed-up line of customers. Nehrings Family Market opened an operation with wood-fired oven pizzas that also provided sit-down service. The Public Market was now offering take-out meals and more packaged and prepared foods, though there were still lots of fresh items for sale.

“85 percent of all the stuff that was there in 2007 is still there,” San Felippo says. The added vendors helped, but it was more about transforming the approach for the original businesses. In addition, the market had success bringing in volunteers to help out.

It’s certainly worked. Last year, the market attracted 1.2 million visitors, including a lot of suburban parents with kids on weekends, and tourists who walk down from the train station, San Felippo notes.

“And we have reached across the great divide, we’re getting a lot more people from north of the freeway,” meaning Downtown residents. The physical separation between Downtown and the Third Ward caused by I-794 has made it very difficult to knit the two neighborhoods together. “It cut Downtown in half,” San Felippo says. “We’re working with the DOT (State Department of Transportation) to increase lighting and use painting, artwork, under the freeway bridge, so it’s not a dark, you’re-going-under-a-bridge atmosphere.”

At this point, he says, the Public Market is such a success, “if I had three times more space I could fill it up.” Those retailers could be attracted instead to the Grand Avenue, if it could be transformed from its current state of white elephantitis. So what can it learn from the Public Market?

A non-profit works better: “When it’s a community asset and not a real estate investment, its easier to get volunteers to help out,” San Felippo says. You can also take more risks if you don’t need to make a profit — you can bring in arts or entertainment groups, he notes, who may not be able to pay that much for rent, but can generate traffic. And a non-profit can get cheap financing. San Felippo expects the city or its Redevelopment Authority will issue low interest bonds that will greatly lower costs.

Food is a key draw: “The Grand Avenue food court is very successful,” San Felippo notes, and could be expanded. And then you build on that success, offering retail products to people coming into and out of the food area. “You already have a client flow you can build on… You want a mix of food and retail and artists.”

The customers are always right. The switch from a pure fresh market approach, he notes, meant “we were offering a product that people wanted to buy rather than deciding what people should want to buy.”

Messy is good: “We wanted organized chaos, messy with no straight lines. We tried to change it up so there’s always something new.” A mall with lots of traffic is chaotic but exciting.

Of course the Grand Avenue is a 450,000-square-foot shopping center compared to the 14,000 square foot Public Market. That’s 32 times more space to fill.

But San Felippo and Chernoff and others involved in the effort expect the mall will only be partly retail. San Felippo believes much of the mall’s upper floors could be rented to educational groups of various kinds.

San Felippo also suggested the mall might rent to the Milwaukee Police Department, for a downtown police station. Chief Ed Flynn has in the past suggested a police station on Wisconsin Avenue. “And could the Convention Center use some of the space?” San Felipppo wonders. “They’ve talked about needing to expand.”

With flexible approach to rentals, and no need to make a profit, “the mall should be able to pay its debt service and all of its operating costs,” San Felippo predicts. “The building is already there. The incremental costs are to build it out.”

“And you need to open up the first floor retail to the street,” he adds. “And open a connection to (Zeidler Park) across the street.”

Finally, San Feliippo believes the Public Market and Grand Avenue can achieve some synergies by working together. The market, he notes, gets asked to hold events that are much too big for it and would work better at the Grand Avenue

Chernoff says his non-profit group is in the midst of a “pretty delicate negotiation” to purchase the mall. Whether San Felippo’s ideas will all work remains to be seen, but having local management by people who care about the city sounds like a better idea than a mall run by some faceless out-of-town corporation.

However, it’s still not certain who the final management team will be. Chernoff suggests the mall could end up as a joint venture, with some of it run by a for-profit company and some of it by a non-profit. But whatever the final structure of the management, it won’t be running a traditional shopping mall. That, Chernoff emphasizes, is “deja vu all over again,” and would be certain to fail.

-One thing that will help bring customers to Grand Avenue is the new project to transform the long underused Posner Building into an apartment complex with 105 units.

-San Felippo recalls that when the Public Market opened, “Mark Belling railed about what a white elephant it would be and how the public would end up having to subsidize it.” I’m guessing Belling may condemn this Grand Avenue effort as well. That might be a good sign.

11 thoughts on “Murphy’s Law: Lessons from the Public Market”