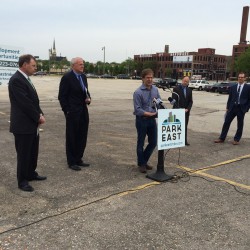 Ten years after the removal of the Park East freeway stub, a marketing plan and strategy was unveiled today for the largely empty stretch of land on the north side of downtown. The new plan streamlines the approval process for projects and creates a single location for all land information in the corridor. The effort comes as a culmination of the work by a task force led by James T. Barry III, President of Cassidy Turley Barry. The task force received heavy praise at the press conference from Mayor Tom Barrett and County Executive Chris Abele.

During Abele’s remarks, he noted several sensible features of the new plan. Beyond creating a single website containing all relevant Park East information, a rolling request-for-proposal (RFP) will be introduced which will make the land available for purchase. Development proposals will be reviewed by a five person panel that includes real estate professionals as well as city and county representatives. In addition, Abele announced that a new process would speed approvals through city and county simultaneously. The net result, Abele promised, would be a faster, streamlined process.

Barrett praised the work of what he called “the A team” on the effort. Noting that Commission of City Development Rocky Marcoux had led the effort on the city’s end, Barrett praised all involved in the project, including members of the state’s Wisconsin Economic Development Corporation. The mayor was bullish on the future of the Park East, declaring: “We think this area is ready to explode.”

Why it took ten years for this plan to come together is a head scratcher. You could posit a number of reasons for the delay. Over-optimism in the pre-recession housing market. The fact that under then-County Executive Scott Walker, the economic development director position sat empty for years. The impact of the recession, which virtually halted any real estate development. The transition time from when Chris Abele was elected. The transition from county economic development director Brian Taffora to Teig Whaley-Smith. The failed pursuit of Kohl’s. Holding the land as a placeholder for a new arena. Differing views on development by county and city officials of the past, whereas Barrett and Abele seem to be on the same page. The list goes on, but thankfully a reasonable plan has at long last been created with a unified city-county approach.

A number of projects are underway or already have been completed in the corridor. Associated Bank recently broke ground on a new branch on N. Martin Luther King Jr. Dr., in addition to a new pocket park. A number of projects have been completed just west of the corridor in The Brewery, the re-branded former Pabst brewery. The Moderne was completed on the corner of E. Juneau Ave. and N. Old World Third St. and is now the tallest building west of the Milwaukee River in Wisconsin. Barlotta’s relocated their headquarters to the former sales center for the aborted Palomar hotel and condominium project. The Aloft hotel was completed on the east side of N. Old World Third St. in the corridor.

On the east side of the river, the Mandel Group is about to break ground on the third phase of The North End. The Flatiron Condominiums were completed. The Avenir is under construction on the eastern edge of the Park East. The Milwaukee School of Engineering built a parking garage and athletic complex as well as the Kern Center along Broadway. The city’s housing authority redeveloped a senior living facility into a mixed-use building on E. Ogden Ave. In addition, Opus Group is negotiating to purchase County-owned land to develop a mixed-use building. 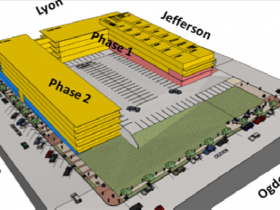 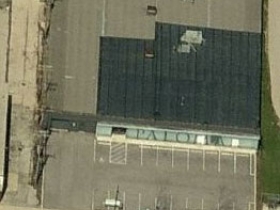 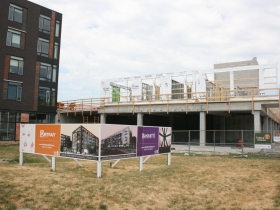