Journal Sentinel Gets Snookered by Walker

On Sunday, the Journal Sentinel’s fact-checking column PolitiFact examined Gov. Scott Walker’s statement, “In 2013 we had the largest, the best, private sector job growth we’ve had in this state since the 1990s.” PolitiFact and reporter Dave Umhoefer rate the statement as “Mostly True.” Their only concern is that the data are not final.

At their best, PolitiFact and its competitors examine not only the literal truth of politicians’ claims but whether they present an accurate picture of what is happening. Without the latter, they offer politicians a great opportunity to cherry pick data that support their argument while ignoring data that contradict it. In this case, however, Umhoefer and PolitiFact let Walker do just this by failing to add perspective to his claim.

As can be seen in the chart below, calculations of private sector jobs in comparison to jobs in the same month a year earlier have striking peaks and valleys. Walker was able to make this claim because December 2013 fell near the top of one of those peaks. 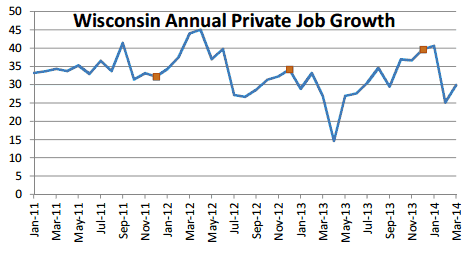 Even after adjusting for seasonality, monthly job data suffer from considerable variability due to the limits of sampling. Comparing two months compounds this variability if the first underestimates and the second overestimates what is happening in the population.

The implication of the governor’s claim is that job growth has been accelerating in Wisconsin. The actual data offer no support for this conclusion.

As I’ve previously reported, the Walker administration has a long history of selectively using data. For example, it has used absolute numbers of new jobs gained when comparing itself to other states, which gives it an automatic advantage over smaller states that disappears when you use the uniform comparison of the percentage increase in jobs.

Other examples can be found on the governor’s web site. Rather than comparing today’s unemployment rate with the rate when he entered office, Walker compares it to the peak of the recession, in essence claiming credit for the decline of 1.8 percent during his three years, but also for the 1.5 percent decline during Doyle’s last year.

As my story (and stories by others) also reported, Wisconsin has lagged behind the nation in job growth since Walker took office in January 2011. This is by now a well-known fact, yet this, too, is not noted in the Politifact column.

6 thoughts on “Journal Sentinel Gets Snookered by Walker”