Every few months, Marquette’s Law School sponsors an opinion survey of a sample of Wisconsin voters. Question 7 in this month’s poll asked:

Do you think Wisconsin is creating jobs at a faster rate than most other states, at about the same rate, or is Wisconsin lagging behind other states in job creation?

Rather than asking for an opinion, this question tests voters’ economic knowledge. It has a right answer. As can be seen from the chart below, the correct answer is “lagging behind.” 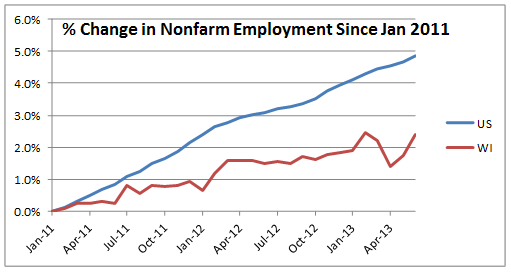 Clearly, the data doesn’t support either of the other two possible answers. Even if you restricted the data to private-sector jobs, the numbers would change but Wisconsin would still lag behind. Wisconsin’s lagging job growth has been well-publicized both in the press and by partisans of the other side.

Yet almost half (47.5%) of voters willing to hazard an answer gave a wrong one. Of those identifying themselves as Republicans, three-fourths (73.6%) got it wrong. And about a fifth of Republicans believed that Wisconsin is creating jobs faster than most other states.

Why did so many voters—especially Republican voters—pick a wrong answer? Much of the explanation, of course, comes from our human tendency to embrace facts that support our belief system and filter out those that challenge it. Perhaps the placement of the question, immediately following one that asked whether voters approved of Scott Walker, influenced the responses: they may have reinterpreted the question as asking whether Walker was good for the economy.

But the responses may also reflect disinformation offered every month on Wisconsin’s job performance by the state agency charged with releasing the jobs data, the Wisconsin Department of Workforce Development. In its cover letter accompanying the data release, the department tries to select data that puts Wisconsin’s performance in the most favorable light. A few quotes from the June report illustrate the approach:

There are several tricks used here. One is using numbers of jobs when comparing Wisconsin to smaller states such as Iowa and switching to percentage changes when comparing Wisconsin to larger states like Illinois. Another is avoiding any comparison to national job gains. Finally there are numerous comparisons to job losses during the Doyle administration, with no hint that Doyle had the bad luck to be governor when the Great Recession hit. It’s cherry picking of data.

Some may take the poll as evidence of conservatives’ weakening grip on reality, similar to the widespread insistence that Mitt Romney was about to win the last election. It is hard to know without looking at states with Democratic governors and weak job growth. For example, Illinois’ job growth has been very similar to Wisconsin’s over the past two and a half years but has a Democratic governor. Would a majority of Democrats insist that job growth meets or beats that of other states? Does the Illinois jobs agency, in reporting monthly results, spin them to favor the governor?

One question is whether a state agency, funded by taxpayers, should be in the business of spinning data for partisan purposes. While I appreciate the secretary’s desire to make his boss look good, there are number of organizations in the private sector that would be happy to take up the task. Instead they let the department do the work for them.

Another is whether people in politics have an obligation to be straight with the people who support them. In this example, those most likely to be misled are supportive of Walker. Among other factors, those less supportive likely get their information from elsewhere. Is it ethical to reward one’s most faithful followers by misleading them?

Finally, ignoring facts can lead to bad public policy. As Daniel Patrick Moynihan observed, “Everyone is entitled to his own opinion, but not his own facts.” In last year’s presidential debates, Mitt Romney had his own version: “You’re entitled, Mr. President, as the president to your own airplane and your own house, but not to your own facts.” If each party feels free to create its own facts, effective solutions to problems such as how to encourage job growth become even more intractable than they already are.

3 thoughts on “The State’s Spin Machine”