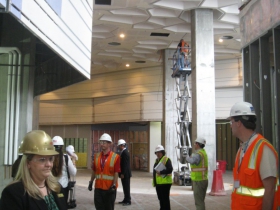 Working on the lights.Photo by Rose Balistreri.

With an anticipated opening this Fall, construction on the Potawatomi Bingo Casino Hotel is sufficiently advanced that the operators were able to open the doors for a media tour today. Construction is winding down from its February high of about 250 on-site workers. Only about 200 remain — or just a little over 10 laborers per floor of the 18 story, 261 foot high, 371,000 square foot, $150 million hotel in the Menomonee Valley.

It is a testament to modern construction practices and the expertise of Gilbane Co., the general contractor, that there have been 514 consecutive days with no lost time due to injuries, says Ryan Amundson, the External Communications Manager of the casino. The 322,000 man-hours of the various tradespeople accounts for a substantial portion of the hotel’s budget, which calls for a payroll total of $47 million. The hotel, when completed and under the management of Hassan Abdel-Moneim, will add 230 jobs to the 2,600 that already exist at the facility.

The hotel proper is not part of the sovereign land that lies beneath the casino, and unlike the gaming hall, it will be smoke-free in all of its rooms. The land is owned by the Forest Potawatomi Tribe, which paid $7 million for the parcel in 2007. The hotel will pay property taxes; the land itself is assessed at  $364,500. Taxes of $11,705.92 are paid in full. Next year’s tax bill will of course be much higher. David Brien, the facilities manager of the casino since 2004, says that when he started he only had to manage 250,000 square feet. With additions over the years, which he also managed during construction, he now has 750,000 square feet to fuss over. The hotel will bring the total to over 1,000,000 square feet, he says.

A tour of the busy site showed trades coordinating efficiently in a clutter-free, although dusty environment. Some finishes, like the entryway’s terrazzo floor (in three shades of gray) are protected from construction activity. Abdel-Moneim nevertheless exposed one section of the glimmering floor for the tourists. The building also has a 250,000 lb. porte cochere that should keep visitors free from the elements, “even when dressed in their finery,” Abdel-Moneim says. 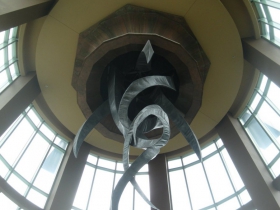 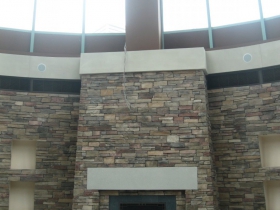 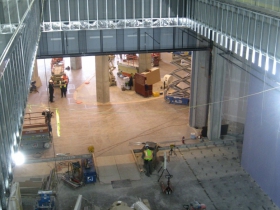 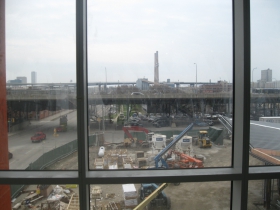 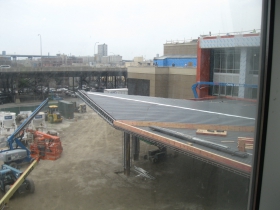 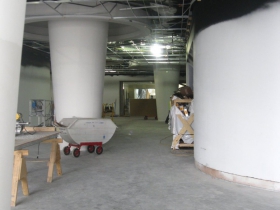