The Heart of New Milwaukee

The Menomonee Valley's renaissance personifies how Milwaukee is becoming a new city -- without losing its roots.

By Dave Schlabowske, Bike Federation of Wisconsin - Apr 18th, 2014 11:54 am
Get a daily rundown of the top stories on Urban Milwaukee 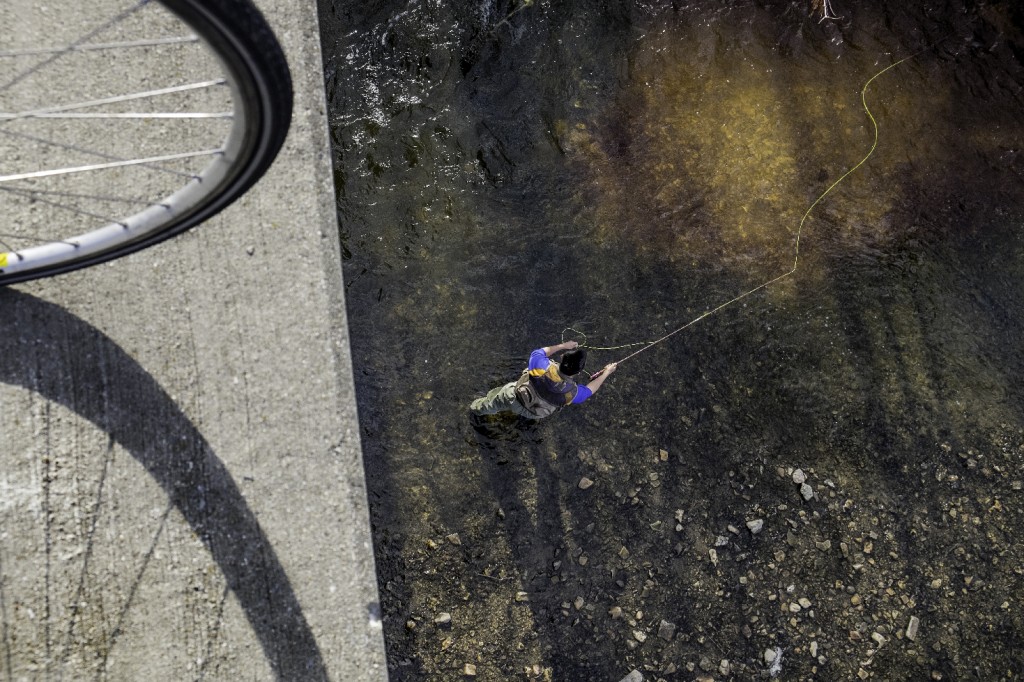 Menomonee River Anglers have been throwing flies for Steelhead now that the temperatures have warmed up. The river water is a balmy 37 degrees, perfect for tout. Bite! Bite! Fish On!

If you have suffered through one of my presentations at the Bike Summit or some public meeting, all the “ya knows” sprinkled in my nasal drone probably clued you in that I was born and raised in Milwaukee. I spent some formative years down der where da streetcars useta turn the corner ’round. Tease me all you want, but I’m proud of my south side Polish heritage and my home town.

I love all the old school things that made Milwaukee great, and I miss those that are gone, like bubblers, the big breweries and the lunch counter at Goldman’s. I have fond memories of going to the corner store to buy some penny candy after school and walking home smelling like whatever the store owners were cooking for dinner, because their kitchen was right in back. After hundreds of visits, I still enjoy getting my sentimental fix by walking down the Streets of Old Milwaukee at the Public Museum.

The remnants of thousands of jobs gone. This is what the Menomonee Valley used to look like.

Milwaukee has changed, and many of those old school things are gone now. They seemed to disappear about the same time that many of the manufacturing jobs left, which was not that long ago. Many of my high school pals took jobs at the factories alongside their fathers rather than go to college. We even had an economics teacher who taught a lesson to prove most of us who planned to go on to college would never catch up financially with our classmates who took factory jobs. I grew up with a visual reminder of that lesson every time I looked out my living room window at a sea of red Allis Chalmers tractors parked in the field next to Ryerson Steel. 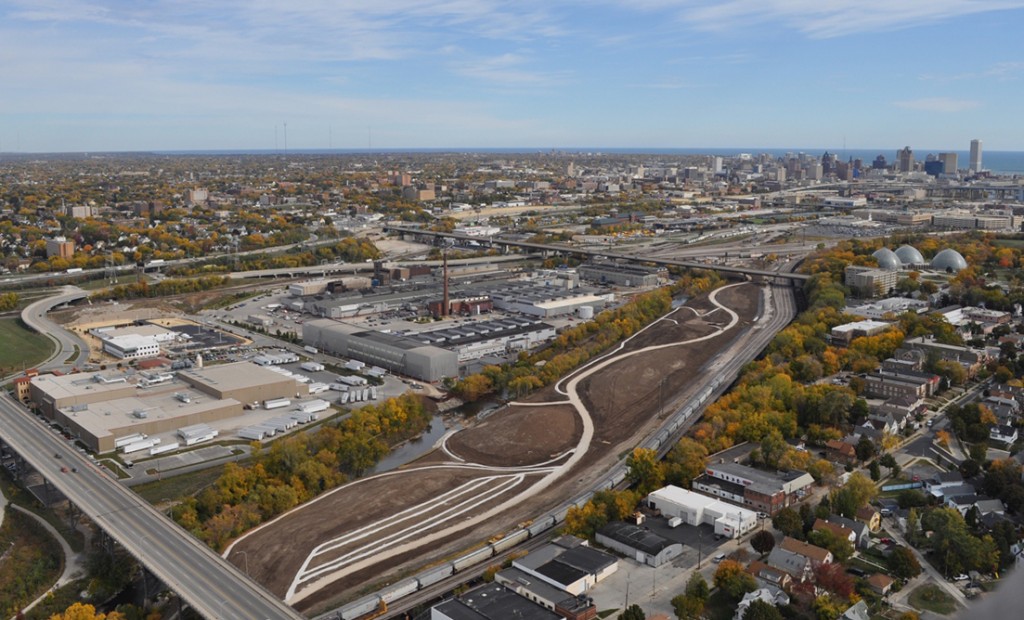 Here is what the Menomonee Valley looked like last summer, filled with new businesses and restored green space. That new Three Bridges Park at the bottom will be green this spring! All this new development on restored brown-fields is springing up in large part due to the trail system and parks. Photo by Milwaukee Dept., of City Development.

It took little more than a decade for all those red tractors to disappear, along with the jobs at Allis Chalmers, AO Smith, and many other businesses large and small. There’s no denying that when companies moved jobs overseas or closed up shop, it hurt my home town. The once prosperous Menomonee Valley and nearby Silver City neighborhood were on rubber leg street for some time after that.

But this story has a happy ending. Thanks to sound leadership, our midwestern work ethic and a stubborn refusal to give up, Milwaukee is on the rebound. Our population dipped, but not nearly as much as many other industrial towns. Our grid patterned network of interconnected streets helped keep our neighborhoods intact, and they are now the scene of new development as local entrepreneurs open up hip restaurants, cafes, shops and even new corner taverns. Many of the new light industry businesses relocating in the Menomonee Valley are doing so because of the nearness to the trail and parks. Nowhere is this more evident than around the Menomonee Valley Passage where our building, the Urban Ecology Center, two new schools and a new manufacturing business have moved.

Sorry to gush, but I can’t help it after my commute home yesterday. I left our office in Silver City, next to a couple new businesses that were redeveloping in formerly abandoned factories, and I rode past even more new businesses in the valley while I was pedaling on the Hank Aaron State Trail past people fly fishing for steelhead on a sunny 60 degree day. It was such a nice ride, I considered going for a mountain bike ride on the awesome singletrack near my house after dinner. Where else can you  go fly fishing, sailing, mountain biking, still find all the urban amenities like major league sports teams, fabulous restaurants cooking innovative locally sourced food, great entertainment (even a casino) and still buy an affordable, well-constructed house? Oh, and if you’re not into molecular gastronomy, remember you can still get a killer fish fry with home-made potato pancakes and  fresh-baked rye bread at Kegel’s Inn every Friday (man, is it good).

Thinking all these positive thoughts had my head was spinning faster than my wheels, and by the time I got home I felt like I lived in an urban paradise. At least I did until I turned on the news and the lead stories were about 6 shootings the previous night and the UWM Panthers being banned from post season play next year because of poor academic performance. It was like somebody sucker punched me. I turned off the TV and went outside to sit with a cold glass of Patterson apple cider while I monitored the grill. It didn’t take long before I was smiling again as I waved to neighbors walking and bicycling past, asked neighborhood kids who stopped to pet our dogs about their day at school and told them to say hi to their parents for me. 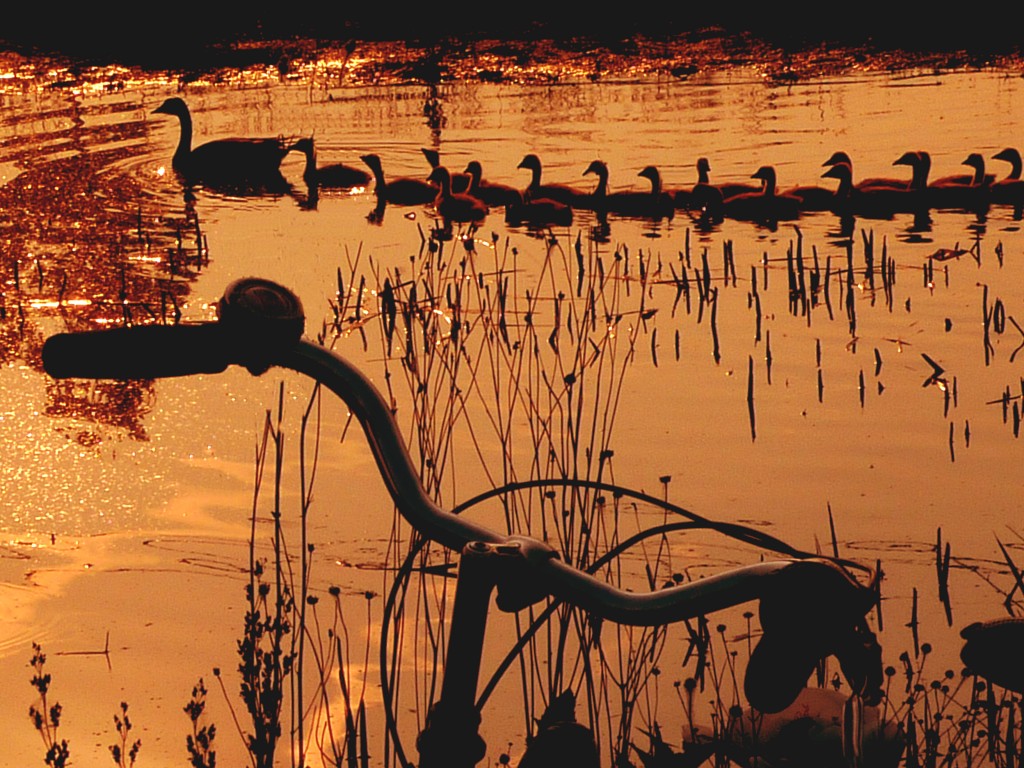 I’m keeping an eye out for baby geese and ducklings in the Valley ponds. It is almost that time!

If you don’t live or work in Milwaukee and all you know about Wisconsin’s largest city comes from television news, you might avoid it like the plague. Over the last several years Milwaukee has been a political punching bag, perhaps because our mayor ran for governor. No other town has been singled out for abuse by politicians. Yes, we still have some big problems like most big midwestern cities, but there is so much new life and exciting vitality here, that you owe it to yourself to visit. There are lots of great towns, big and small in Wisconsin. I’m sure many of the readers could write a similar post with slightly different community highlights. But if you are someone looking to expand your business, a young person looking to start a career, or a family looking to put down roots, look me up and I will take you on a bike ride around the streets of new Milwaukee. I think you will be impressed.

2 thoughts on “Bike Czar: The Heart of New Milwaukee”