On March 10, 2011, 95 members of the state Assembly voted on Act 10, which all but ended collective bargaining by most public employees. The 53-42 vote gave Republican Gov. Scott Walker, in office only a few weeks, a huge victory. Of the 95, 52 Republicans and one independent voted for it, and 38 Democrats and four Republicans voted no. One legislator missed the vote; three Assembly seats were vacant.

When the next Legislature convenes in January, 48 of the 95 – or more than half – of Assembly members who voted on Act 10 will be gone from that house. And 25 of those 48 are Republicans.

The percentage of senators who lived through the Act 10 firestorm, and who won’t be in those seats in January, isn’t as high. But it’s more than usual – 11 in the 33-member Senate – and the number grew Friday, when Senate President Mike Ellis announced he will retire after 44 years in the Legislature. Three more GOP senators – Majority Leader Scott Fitzgerald, Joe Leibham and Glenn Grothman – will consider running for the 6th Congressional District vacancy created Friday by the retirement of Republican U.S. Rep. Tom Petri.

That Act 10 fight Walker picked made him the most polarizing political leader in Wisconsin. But it also got him so much national notice that some GOP conservatives want him to run for president, assuming he’s re-elected Nov. 4. The February-through-March fight over collective bargaining, and how much those employees should pay for pensions and health care, had a monumental impact, weakening public employee unions and attracting worldwide attention.

But that brutal fight did take its toll. It’s too simple to say that it drove half the Assembly, and 33 percent of the Senate, out of those jobs. But it’s also naïve to discount it as one reason for the Legislature’s unusually high turnover over the next four years.

“You get tired of losing,” Democratic Rep. Fred Clark said last week, offering a partial explanation for why he decided to retire after six years in the Assembly. 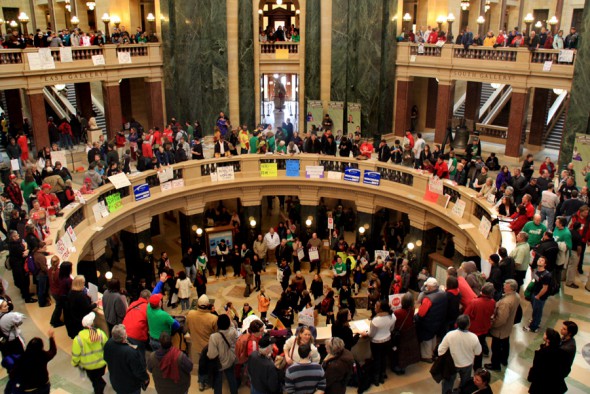 But retiring Republicans like Rep. Dan LaMahieu are proud of their votes for Act 10. “We could not sustain public-sector government at the rate we were going,” LaMahieu says of his 2011 vote. “We had to do something. We were going to go bankrupt, and it was going to be not too far down the line.”

Political scientist Charles Franklin of Marquette University’s Law School said the high four-year turnover among legislators is unlikely to usher in any new wave of cooperation. “There has been a lot of turnover of people but much less of party,” Franklin says. “The new legislators are overwhelmingly of the same party as those they replaced, so the more things change the more they remain the same.”

Franklin adds: “People turning over might remove some with bruised feelings from the Act 10 battles, but with the degree of party polarization we see it is unlikely to increase bipartisan cooperation.”

In his retirement statement, Republican Rep. Don Pridemore made that point: “Recent Assembly elections have been won by some very good young (Republicans) with fresh ideas and a commitment to sound conservative principles,” Pridemore said. “I expect the fall elections will produce more of the same….I leave the Assembly in good hands.”

Still, where have all those veterans of the War of Act 10 gone? More than 30 of the 59 are retiring from Capitol politics. Four 2011 Assembly members – Republican Sens. Paul Farrow, Jerry Petrowski and Tom Tiffany and Democratic Sen. Jennifer Shilling – moved to the Senate. Three other Assembly Democrats – Janis Ringhand, Janet Bewley and Penny Bernard Schaber –  are running for the Senate this year, so they won’t return to the Assembly. A fourth Assembly Democrat, Milwaukee Rep. Jon Richards, is running for attorney general.

Seven of the 11 senators from 2011 who will be gone next year retired, including Ellis. And voting for Act 10 got three Republican senators tossed from office in recall elections. Both parties continue to disagree and battle over the impact of Act 10.

3 thoughts on “The State of Politics: Casualties of War”