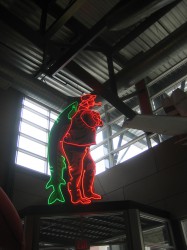 A landmark advertising sign that once dominated the Port Washington harbor was installed at the St. Paul Fish Company in the Milwaukee Public Market on Monday evening, March 31st. The neon-outlined painted sculpture of a pipe-smoking man with a large fish draped over his back had been mounted high atop the Smith Brothers Fish Shanty restaurant for decades. Also on display in the market is a three-dimensional sculpture by Adolph Thiele that dates from 1965 of the man with fish, an interior ornament of the former restaurant/tourist trap in Port Washington.

The additions are part of many more to come, says Patrick Nedobeck of St. Paul’s. They join a large fish erected last week and will soon be accompanied by some 1940’s neon lighting above the stainless steel oyster bar. There is also an airplane aloft and a giant inflatable crab who is getting crowded out of the picture.

Nedobeck said the site-specific sculptures “found” him. Like many Milwaukeeans, he had seen them in situ during journeys to the Ozaukee County seat. He became reacquainted with them a couple of years ago after visiting a building in which they were housed. The owner had bought them along with the restaurant when it closed around 2007 and had them in storage when Nedobeck saw them, triggering memories and presenting an opportunity. He asked if they were available and was told no, he said, and there matters rested for a number of years. A few weeks ago, things changed, and Nedobeck and his brother-in-law Tim Collins, who founded the St. Paul’s seafood store in 2005 with Nedobeck’s sister Mary Beth, acted quickly to get their hands on them. “It cost us some money, and it cost us some fish,” Nedobeck says. 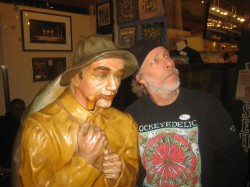 The effect of the neon sculpture is particularly striking. It is mounted above the southeast exit of the market which is located at 400 N. Water St. in the Historic Third Ward. The figure of a fisherman outlined in red neon carrying home the day’s prize outlined in green while smoking his pipe and dressed for wet going was used extensively by the Smith Bros. in its roadside advertising, menus and interior decor. It survives in the logo of the Smith Bros. Coffee House, located in the Duluth Trading Company, a business that opened in the old Fish Shanty at 108 N. Franklin St. in Port Washington in 2012 after the building had been vacant a number of years. It is a most becoming image, and in the upper realms of neon advertising art.

The neon fisherman also survives in his original incarnation as a roof-mounted sign above the two story red brick Colonial building. However, Nedobeck says that one is a replacement cut out of aluminum, while this is the original. The artist is unknown to me, however, the theme and its execution seem to be similar to the work of Wisconsin State Teacher’s College [UWM] professor Robert von Neumann, (1888-1976) whose murals also hung in the restaurant.

Nedobeck says reaction has been positive from passersby, a number of whom identified it immediately. “I can’t think of a single better place for this sign to be mounted,” he says. As for his next project, he says he would love to find the whale’s mouth that framed the entrance of the Smith Bros. Fish Shanty, a 1960s fantasy structure that the company operated in Los Angeles. [Must be seen to be believed here.] “Wouldn’t it be great to have people enter the whale’s mouth to get into St. Paul’s?” 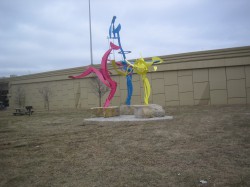 April is a Gallery Night month, and the change of season has permitted the installation of yet another Richard Edelman sculpture in urban Milwaukee. “Three Dancers,” a pink, blue and yellow composition evokes the spirit of its name. The artist named the elements “On Point,” “Swan Lake,” and “Arabesque.” Let’s have fun and guess which is which [see photo].

“The figures are all tall and each rests on one toe, so to stabilize the grouping I tied each to the next at one point forming a stable triangulated structure like three legs of a stool,” Edelman says of the technical challenges he faced with the monumental fabrication. The former engineer has produced over 250 works since he took up sculpture about 8 years ago at age 58. The grouping is located in the otherwise dead pocket park / freeway ramp at the northeast corner of N. 2nd St. and W. St. Paul Ave., and is designed to be animated both at street level and for those spiraling along the inclined freeway ramp. The folks at the Warehouse Loft now have something to see in the square, and the picnic table there finally has some company. Edelman does not confine himself to massive steel fabrication. The show Richard Edelman: Recent Works in Bronze is on view at the Jewish Community Center, 6225 N. Santa Monica Blvd. through April 27th.

My colleague Tom Bamberger, in his recent story on public art, has raised questions about the plethora of works by Edelman in the Third Ward.

A century ago left wing Germans in Milwaukee led a movement with parallels to our own time, a husband-and-wife team told a large group of interested citizens this week.

Over 100 people attended a speech by retired professors Paul Buhle and Mari Jo Buhle at Turner Hall on Monday, March 31st. The event, which had been delayed due to illness of the speakers earlier in the month, filled the meeting room at the Historic Turner Hall, 1034 N. 4th St. Paul Buhle noted the tradition of singing as a political gesture. It was a common element in 19th century Turner Hall political meetings and rallies and survives today in the Solidarity Sing Along, which has been at the Wisconsin State Capitol at noon every weekday since March 11th 2011.

Turner Halls were vital in rallying newly arrived Germans to fight for the Union in the Civil War, and provided other political and social opportunities for the working class. “Turn Halls had libraries, music rooms, small scale theater and beer gardens,” Paul Buhle told the non-drinking crowd. The Socialist movement also is traced to the Turner influence, since the postwar Republican party soon became the party of business, “while the Democrats were corrupt,” he said.

“Milwaukee’s German Americans realized Socialist could be honest, efficient, even good for business,” he said. Plus, “you could organize strikes at Turn Halls.”

His wife Mari Jo Buhle, who has received a MacArthur Foundation “Genius” Grant focused on two women Milwaukee Turners, Mathilde Anneke and Meta Berger. Anneke (1817 – 1884) and Berger (1873-1844) found a common interest in voting rights and education reform. It was almost “their first nature,” she said.

These topics, which remain hot-button issues in the 21st century were seen as allied by the women. “For women to enact education reform, they must have full citizenship. Almost all woman suffrage movements started with agitating to take part in school board elections,” she said. The right of women to vote in school elections and serve on school boards was granted to Wisconsin women in 1869 partly due to the work of Anneke. Anneke used her administrative skills to operate a school herself, where she “was committed to teaching a broad range of subjects — history, literature and science.”

Meta Berger was the wife of Socialist Victor Berger (1860 – 1929), the editor of the Milwaukee Leader, and the nation’s first Socialist member of the House of Representatives (1910). Meta Burger founded the Women’s School Alliance in 1891. After the depression of 1893 she rallied to support public schools with playgrounds, lunches and after school programs. Berger believed “every child should have enough to eat and sensible clothes,” Mari Jo Buhle said.

Mari Jo Buhle found a cautionary tale in recent experience and the work of the two women, who were more than a generation apart. “We live in a state where voting rights are being sharply curtailed … Education is under severe attack by Act 10 … cuts in budgets, teachers vilified, school lunches are ‘un-American,” … it takes me back to the contribution of these two women.”

I Make a Fool of Myself in Front of a Genius 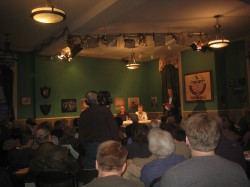 It was a full house at the Turner Hall for a speech on Milwaukee’s left wing political history, much of which happened right on the spot. Photo by Michael Horne March 31st, 2014

I had read about Mathilde Anneke many years ago, probably as far back as high school, perhaps during my wanderings of the Milwaukee Public Library or a display at the Milwaukee County Historical Society, so I thought I was ready to chat with Mari Jo Buhle, a MacArthur Foundation Genius and to share some thoughts about her life and struggles.

I remembered one fact about Anneke that I thought was quite striking. How could she do all of the work she did despite having only one arm?

All I could say, rather lamely, was that I thought for years she just had one arm. Well, I went back to my research and soon found a photo of Anneke in the year before her death with two healthy arms.

So, what could have put this crazy notion in my mind? There were several descriptions of her “single-handed” efforts on behalf of women. Somehow my brain translated “single-handed” to one-armed. My apologies to Dr. Buhle, E. J. Brumder and to history itself.