It's hugely popular and cheaper than other transit, but Mayor De Blasio opposes subsidy. Could that have ripple effect on other cities?

By Dave Schlabowske, Bike Federation of Wisconsin - Mar 28th, 2014 10:09 am
Get a daily rundown of the top stories on Urban Milwaukee
It has been widely reported that New York City’s Citi Bike system needs millions of dollars to put the blue bike-share system back in the black. The system has been hard hit by this long winter, equipment damage from Super Storm Sandy, and computer glitches that made it difficult for tourists to rent bikes for a day, but Mayor Bill de Blasio said Friday that any bailout won’t come from the wallets of NYC taxpayers.

“At this point, city budget money is not on the table,” he said. “We will collaborate with them to help them find ways to be more efficient and more effective.”

Some might applaud the well-known progressive for drawing the line in defense of taxpayers, but given the amount of tax support for every other mode of transportation, I hope the mayor changes his mind. Citi Bike is the only bike-share system in the country that does not get any public funds. (The City of Milwaukee has provided capital funding for this city’s bike share system). Citi Bike might also be the only transportation system in the country that relies entirely on user fees and sponsorship; every other system, notably including all the roads and highways for driving but also including  transit and even walking (on sidewalks, etc.) are subsidized by taxpayers. 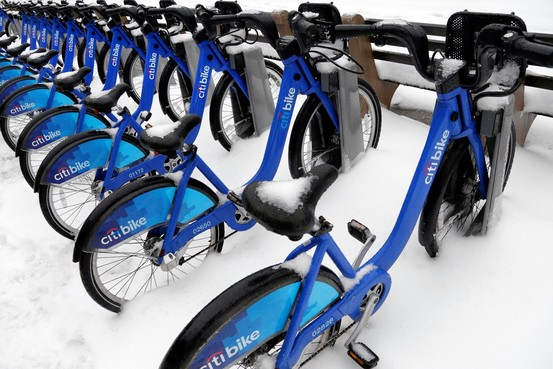 The harsh winter cut down on Citi Bike rentals.

Despite the problems with the business model, Citi Bikes has become an integral part of the way New Yorkers get around and I think it’s worth some investment of public funds to help them get over this hump. De Blasio’s decision could have a ripple effect nationally, given the size and stature of New York City.  Streetsblog is reporting that Mayor de Blasio is hoping that Alta Bike Share, which runs Citi Bike, can find private money to fill the funding gap. In the same article, writer John Petro makes the case for using public funds to save the immensely popular program given Citigroup already kicked in $41 million over 5 years to get naming rights.

“After all, the city subsidizes the East River Ferry, which averages 3,200 daily riders, but not Citi Bike, which was averaging 35,000 daily riders in November and consistently exceeded 10,000 daily rides in the winter. The approximately $2.5 million that goes to ferries could benefit more people if it was spent to bolster Citi Bike and expand it into working class neighborhoods.”

In that perspective, kicking in some public funds seems pretty reasonable to me, given how heavily we subsidize other forms of transportation. I’ve lost count of how many times I’ve had to refute the “people who ride bikes don’t pay for the roads” argument. I have repeatedly tried to debunk the myth that gas taxes and registration fees cover the cost of driving. Even the most conservative estimates show taxpayers subsidize the cost of the automobile travel by 50 percent since 2007, as the chart below illustrates. 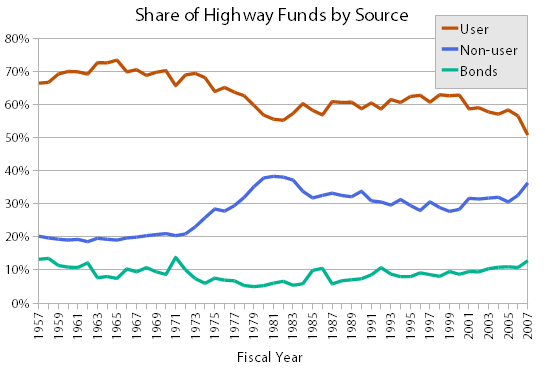 This chart shows that our highway system is subisdized by non-user fees through bonding and direct transfers from the general fund to the tune of 50%.

Further, Bixi and Citi Bike have simply joined the not-so-exclusive Unsustainable Transportation Club, as I’ve dubbed it, that includes members like the Federal Highway Administration and the State of Wisconsin Dept. of Transportation. The Federal Highway Administration predicts our own national Highway Trust Fund will be in the red by August of this year: “Based on current spending and revenue trends, the U.S. Department of Transportation estimates that the Highway Account of the Highway Trust Fund will encounter a shortfall before the end of fiscal year (FY) 2014.” Some state DOTs are estimating we could be in the red as early as June. 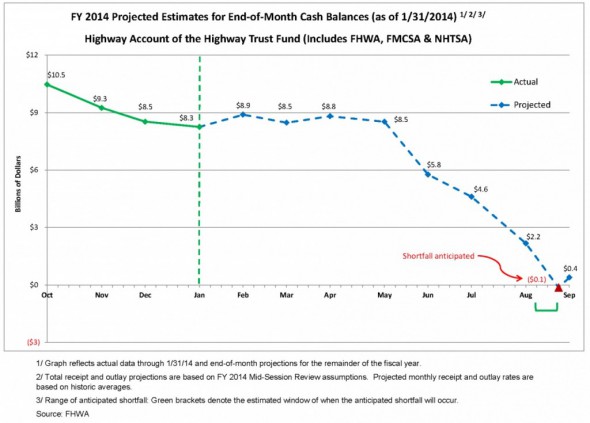 Because people are driving less and cars are getting better fuel mileage, the Highway Trust Fund is projected to run in the red before the end of this year.

And what is the most likely solution to the Highway Trust Fund problem? Are our leaders looking for a sponsor or to raise user fees like the gas tax? Nope, the odds are Washington will give the Highway Trust Fund a multi-billion dollar injection of public tax dollars from the general fund to keep it afloat. Don’t be shocked, this happens all the time at the federal level and even here in Wisconsin. After all, over the last two budgets, Wisconsin has made similar transfers of hundreds of millions of tax dollars to supplement the state transportation fund. Over the next ten years in Wisconsin, the funding gap between our transportation funding sources and estimated costs of roadway repairs and maintenance varies between $2 billion and $18 billion. 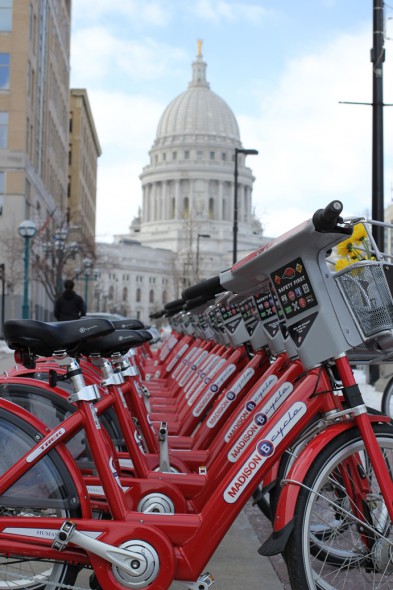 Maybe NYC should have chosen B-cycle for their bike-sharing program.

There is a “devolution” move by a couple of Tea Party members to cut virtually everything from the FHA budget except funding for the interstate system, but that bill seems little more than a statement of principle. In the extremely unlikely event that U.S. Rep. Tom Graves and U.S. Sen. Mike Lee manage to pass their Transportation Empowerment Act in Washington, I will be willing to listen to user fee funding arguments, but until pigs learn to fly, we will have to accept a certain level of public subsidies for all our various modes of transportation, from driving to walking and everything in between.

So while I wish Alta Bikeshare good luck seeking new sponsors and rate increases above the 24-hour and weekly prices of $9.95 and $25 respectively, I would hope that Mayor de Blasio will support a transfer of some public funds to keep the incredibly popular blue bikes from turning red. Or maybe they should turn red, since the equally popular red B-cycle systems in Madison and other cities seem to be on solid financial ground!

Last week Madison B-cycle kicked off its fourth year of operation with six new stations, 35 stations total, and 350 bikes There will also be new membership options that will be payable in monthly installments.