New Champion of the City

Milwaukee’s political leadership is changing: MPS Superintendent Gregory Thornton is off to Baltimore. Republicans, who run the Capitol, reduced the power and pay of Milwaukee County supervisors. And Milwaukee Common Council President Willie Hines stepped down to take an administrative job in city government.

That makes his replacement, newly elected council president Michael Murphy, the city’s newest political champion. And, in his first WisconsinEye interview, the 25-year veteran of Milwaukee politics was bluntly outspoken. 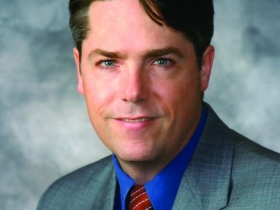 Ald. Michael Murphy. Photo from the City of Milwaukee.

Asked whether Republican officials in the Capitol care about Milwaukee’s budget, poverty, transportation and education problems, Murphy told this story: After his February election as Council president, Murphy asked to meet with Assembly Speaker Robin Vos, a Racine County Republican. Murphy said he spent 90 minutes briefing Vos on city finances and other critical issues. At the end of the meeting, Murphy quotes Vos as saying: “I really appreciate what you have presented. But, at the end of the day, none of my members would believe a word of what you’re saying.”

Twenty years ago, Milwaukee Democrats dominated the Legislature. Now, Murphy said, Gov. Scott Walker and Republicans have cut state aid, refused to create a regional transportation authority that would help city residents get to suburban jobs, and ended the residency requirement for city firefighters and police officers. “They’re going to get to the point where they start deciding where stop lights go,” Murphy said.

Nonetheless, Murphy said he will go to Madison as often as possible to talk about facts like this: The city levies $225 million in property taxes, but the Milwaukee Police Department alone costs $227 million.

Asked to list positive changes he’s seen in Milwaukee, Murphy listed downtown development and the “huge” influx of Latinos, who deserve to be helped by immigration reform that appears dead in Congress. Murphy also supports raising the statewide minimum wage to $10.10, has endorsed School Choice and charter schools in the past, and supports same-sex marriage. The 52-year-old and his wife have a daughter.

Murphy said “increased poverty” is the saddest change he has seen in Milwaukee. Asked what causes that poverty, Murphy listed “a lack of education,” a “lack of mobility,” children without fathers, and the number of African-American men who can’t get jobs because they have had some involvement with the criminal justice system. “We have some unique problems,” Murphy said. “We, as region, have kept poor people in cities.”

Another issue for the city is the state’s plan to spend $2.5 billion in state and federal money to rebuild the Zoo Interchange and East-West Freeway that runs past Miller Park, which is located in Murphy’s 10th aldermanic district. He predicted that the state Transportation Department officials will insist on double-decking the East-West Freeway – something that Murphy, neighborhood residents and Mayor Tom Barrett oppose. DOT officials are only going through the “exercise” of seeking public opinion on options to double-decking that section of the freeway, which Murphy said would cost an additional $200 million.

Asked what he wants in the next MPS superintendent, Murphy had a one-word answer – “longevity.” The next MPS leader should promise to stay at least five years, Murphy said, adding: “It’s a little hard when (superintendents) sit down and tell you, ‘I’m committed to making a change and improving the education system in the city,’ and they’re gone in three years.”

But one of the toughest issues Murphy and all Milwaukee-area civic and political leaders face is how to pay for a new Milwaukee Bucks arena. Nobody wants to be the leader on whose watch Milwaukee lost its pro basketball team. But Vos and the leaders of three counties that border Milwaukee County insist that their residents won’t pay for a new downtown arena, Murphy said.

Although he said Walker wants a referendum on a new Bucks arena, Murphy said city residents would defeat it. Almost one-third of the residents of his aldermanic district live in poverty, and rarely – if ever – go to Bucks games, he noted. They will not raise their taxes to help the NBA make more money and make suburban residents who go to games more comfortable. Maybe, he said, “international” investors will help pay for a new arena.

Murphy said he would like to help Democrat Mary Burke defeat Walker.  But, he added, “I’ve never met her. I want to sit down and talk to her.”

2 thoughts on “The State of Politics: New Champion of the City”