Cities already have less turnout and lower percent of early voters than rest of state, but bill will cut that even more.

If you were concerned about making sure everyone in the state has a chance to vote, you might want to look at the quaint city of Delafield in Waukesha County, for a fine example. For the 2012 presidential election, it had just 4,975 registered voters. It has one place where voters who want to vote early can do so, and 26.4 percent of those voters, or 1,159 people, appeared in person to do so. There were no reports of any problems for these voters.

Compare this to the city of Milwaukee, which had 66 times more registered voters than Delafield, with a total of 328,202 such voters. You might think Milwaukee would have far more polling places where voters who wanted to vote early could do so, but you would be wrong. By state law, all early voters must appear at one place (the downtown municipal building) to vote early. And they must get there within a limited period of time: in 2011, Gov. Scott Walker and GOP lawmakers cut back the early-voting period from three weeks, including three weekends, to two weeks, including one weekend.

This is not an anomaly. State-wide, 16.7 percent of voters showed up to vote early in the 2012 presidential election, according to figures from the Government Accountability Board. Typically the percentage was higher in suburbs and small towns and lower in the state’s big cities. The percent showing up to vote early, according to GAB statistics, was 34.5 percent in Whitefish Bay, 28.2 percent in Menasha, 26.5 percent in Brookfield, 26 percent in Port Washington, 25.8 percent in Oconomowoc and 25.3 percent in New Berlin — all much higher than Milwaukee’s 12.6 percent or Madison’s 12.5 percent.

Madison had 182,859 registered voters for the 2012 presidential race, or 37 times more than Delafield, but by law must handle all in-person early voters at one place. “Madison has even more cramped quarters than Milwaukee,” says Kevin Kennedy, the GAB’s director, who recalls waiting “30 to 45 minutes in line” to vote early. “They do it in the clerk’s office.”

For that matter total voter turnout is also lower in the cities. In Milwaukee 75.3 percent of registered voters cast ballots in the 2012 presidential election while 69 percent did in Madison. By contrast the comparable percentage was 85.7 in Menasha, 85.5 in Whitefish Bay, 82.6 in Port Washington, 77.9 in Delafield, 77.6 in Oconomowoc, 75.7 in New Berlin and 74.2 in Brookfield.

Years ago, the agreed-upon, bipartisan goal in this state was to provide access to all who wanted to vote. Today’s Republicans have changed the definition. As Senate Majority Leader Scott Fitzgerald (R-Juneau) told the media, GOP lawmakers want to “level the playing field” so that there is the same access to early voting in all municipalities.

That strikes me as an anti-democratic goal, but if that is what’s desired, you would look at these numbers and conclude that a much lower percentage of big city voters are able to vote early, and take measures to bump up their percentage, by allowing cities more places to record early votes or longer hours to do so.

For years, says Milwaukee Mayor Tom Barrett, the city has pushed the legislature to allow cities to have more places for in-person early voting. “For years we’ve asked for more locations, so you wouldn’t have these bottlenecks and long lines.” But legislators refused.

Instead, GOP lawmakers are about to pass a bill that would end any early voting on weekends and require that it occur only on weekdays between 8 a.m. and 7 p.m., with a total time limit of 45 hours of early voting a week.

Under this time constraint, Barrett notes, given the number of people voting early in Big Bend in 2012, they would have had 47 minutes per person to vote. In Milwaukee you would have a person voting every nine seconds.

That, of course, is impossible, meaning the law will further reduce early voting in Democratic-leaning big cities, cutting it even further below the rate in Republican-leaning suburbs and villages and towns. “This law is all about trying to predetermine the outcome of elections,” Barrett charges. “They’re not trying to fix problems, they are trying to fix the elections.”

Republican lawmakers refused to debate the bill on the floor of the legislature. They did not say why. Might that be because they could not counter the arguments of Democrats?

Republicans, however, were willing to explain their justification to the media, apparently feeling they would be challenged less in that arena. (Hm, that’s something for reporters to think about.) 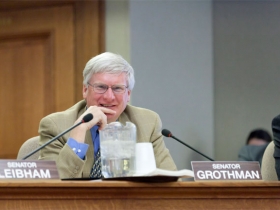 State Sen. Glenn Grothman (R-West Bend), the bill’s sponsor, said larger municipalities such as Milwaukee have the money to keep polls open longer, giving voters in those communities more of a chance to vote. “It’s a matter of uniformity. I don’t know what all the hoopla is over,” he told Reuters.

But as Grothman ought to know, voters in rural and suburban areas vote in higher percentages than in big cities. If his goal is to provide more of a chance to vote, he is proceeding exactly the wrong way.

Fitzgerald noted that rural areas don’t have the clerks that cities do. “It’s difficult for people to turn on Channel 6 in Milwaukee,” he told the Milwaukee Journal Sentinel, “and there’s a shot of someone voting during a time when it’s not available to people in rural areas.”

But Republicans haven’t offered one example of a rural or suburban voter who was not able to vote. Rural areas don’t need the staff of clerks you find in a city like Milwaukee, because these areas may have 50 to 100 to 500 times less voters.

The state Assembly passed a version of this bill that is even more draconian: it would cut early voting to a maximum of 40 hours per week.

Mary Kae Nelson of the nonpartisan League of Women Voters of Milwaukee County called the bill is a “solution to a non-existent problem,” that would reduce opportunities to cast a ballot for voters who have daytime jobs, daytime classes, elder and child care or frequent travel obligations.

“This is about suppressing the vote for people of color, people with disabilities and for low-income people,” Barrett charged.

Veteran state senator Sen. Tim Cullen (D-Janesville) served in the cabinet of Republican Gov. Tommy Thompson, back when Republicans and Democrats alike believed government should do all it can provide access for people to vote. What’s going on here is quite cynical, he suggested: “If you can’t win them over with policies and ideas and candidates, you suppress their turnout.”