Supporters headed to the State Capitol for "Public Transportation Day," meeting with legislators, promoting their agenda, and handing out awards. 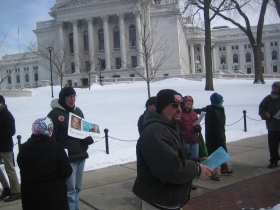 Protestors in front of the Capitol. Photo by Michael Horne.

On Tuesday, March 4th, Jeramey Jannene and I headed to Madison on the Badger Bus to attend the 2014 “Public Transportation Day” events in the State Capitol building. Just two miles from our destination, the bus had to stop while we waited for a train to pass. Of course, it was a freight train. (Had it been a passenger train, Jeramey and I would have been on it.) But there is no such creature as a passenger train linking the state’s largest city with its seat of government.

This little episode put the whole day’s activities into relief as volunteers from Wisconsin’s 28 bus systems and 43 shared-ride taxi systems spread out to do a lit drop on the offices of the state’s 132 legislators. The transit day events were coordinated by the Wisconsin Urban & Rural Transit Association, whose Legislative Representative is Gary Goyke, a former Representative to the Legislature. His son, Rep. Evan Goyke, [D-18] was one of the 132 elect representatives to receive the package outlining the group’s agenda. 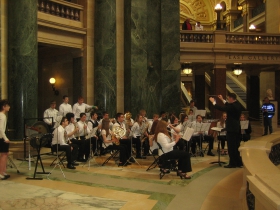 Performance inside the rotunda. Photo by Michael Horne.

So, what are the issues facing transit operators and users these days? WURTA did an admirable job in limiting the list to just a few.

Scene in the Capitol

As part of the Public Transportation Day events, WURTA held a news conference in the Capitol at which the legislative agenda was announced. Crystal Martin, the WURTA chair who runs paratransit operations for the City of Madison was among the folks introduced to the attendees. She gave a welcome and a Transit Week report to the audience. She was followed by Greg Seubert, director of Wausau Transit who, as WURTA legislative chair gave the outline of priorities listed above. 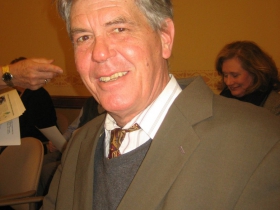 “Following that was the Presentation of the 2014 Outstanding Service Awards, and my opportunity, for once, to write ‘Full Disclosure’ in one on my columns.” – Michael Horne.

Following that was the Presentation of 2014 Outstanding Service Awards, and my opportunity, for once, to write “Full Disclosure” in one of my columns.

The 2014 Outstanding Public Service  Award went to Ms. Susan Lemke, the Transit Director of the City of Stevens Point. This was presented by freshman State Representative Katrina Shankland, who once held her office hours on a bus, which seems like a fabulous idea that should be tried here. It would fit in excellently with the Senate District of Chris Larson, for example. Ms. Lemke is apparently a very efficient manager, and was warmly supported by friends and associates.

The 2014 Outstanding Statesman Award went to State Senator Jerry Petrowski [R-29], the Chairman of the Senate Committee on Transportation who was recognized for his “professionalism and fairness in leading transportation policy within the legislature.” 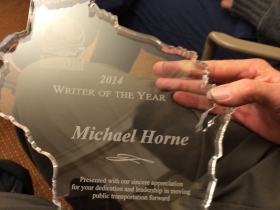 2014 Outstanding Writer of the Year Award

Petrowski said he used to take the bus downtown [Stevens Point] with his grandmother all the time. “A lot of people need to find a way to work, to pay their bills, take paratransit. Together we can do great things, but it takes willing parties to find an answer,” he said, before taking off to cast some votes with the willing parties that run the Wisconsin State Senate.

[Full Disclosure: I received the “2014 Outstanding Writer of the Year Award” for my “clever, factual and enlightening articles on transit awareness,” at this event. I am grateful for the recognition, and especially appreciate the support of Urban Milwaukee readers who have consistently shown a keen interest in transit and transportation funding politics.]

2 thoughts on “Plenty of Horne: The Transit Agenda”