The Long Arms of Uber

The upstart ride service company could replace cab companies across the globe, some predict. How will it change our city? 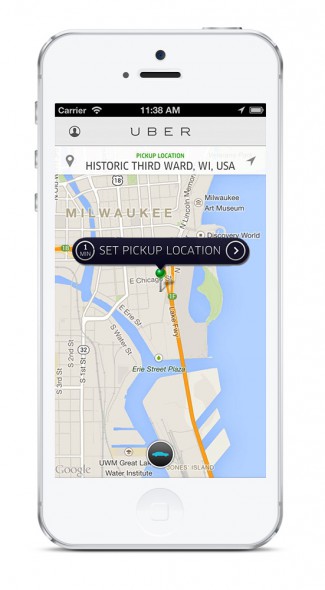 The visuals at the Uber website tell a story of elegant, beautiful people, the studly guy with a stylish stubble of beard and and a sport coat with no tie, the woman so splendidly long-legged, long-haired and long-eye-browed. “Arrive in Style,” the site coaxes and “Go Global…The Uber App Connects You With A Driver At The Tap Of A Button.”

You might think that sounds too high-brow for homey Milwaukee, but you’d be wrong. Last month Uber added this city to the 36 other North American places it serves, not to mention five cities in Central- and South American, 22 cities in Europe, Middle East and Africa and 17 in the Asia Pacific area.

Included on that list are the Hamptons, Palm Springs and Dubai, underlining the upscale appeal of Uber. Initially, Uber drivers drove Lincoln Town Cars, Cadillac Escalades or a Mercedes Benz, Wikipedia reports, but the company eventually added a wider selection of cars, targeting a broader cross-section of passengers through its UberX service.

Indeed, the privately-owned company based in San Francisco and founded in 2009 ultimately wants to deliver all of us to our destination, even the fat and dumpy and short-legged among us. As Kevin Roose of New York Magazine put it, Uber’s short-term objective is “to kill the taxi business, and become the cheapest, best way to get around major cities all over the world.”

The company’s website offers a more mild-mannered description: “By seamlessly connecting riders to drivers through our apps, we make cities more accessible, opening up more possibilities for riders and more business for drivers.”

The Uber software is aimed at every urban earthling, allowing people who need a ride to connect with a driver via mobile app, text message or the web, and is available for iPhone, Android and Blackberry devices. No standing in the rain hailing a cab and no long waits: your ride is supposed to arrive faster than a taxi would. And payment is made by credit card, which is on file with the company.

Brandon Knight who was rider zero in Milwaukee.

“It’s a killer experience,” said Marc Andreessen, co-founder of Netscape Communications, in a story by cnet.com. “You watch the car on the map on your phone as it makes its way to you…. Uber is software (that) eats taxis.”

But it’s a boon to limousine drivers, helping end the downtime waiting for the next rider and better employing often idle resources. “One San Francisco chauffeur estimates… Uber nets him more than $45 per hour, on average,” Wired.com reported. “Another says that his total earnings are now roughly $2,100 a week, with $920 of that coming from the service. Since the cars are already paid for and the drivers want to work, Uber is like found money for everyone: the drivers, the owners, and of course Uber itself, which takes 20 percent off the top of every ride.”

Another benefit for drivers: passengers can’t jump out of the car without paying the fare, as some cab riders do, because Uber has your credit-card number—and for the same reason, drivers are not at risk of being robbed.

Uber is expanding far beyond deals with limousine drivers. The company secured $2.5 billion in outside financing for low-interest car loans for its less elite UberX drivers. This will make it possible for up to 200,000 drivers to buy their own cars at very low interest rates, under the condition they use those cars on the Uber network for the duration of the loan.

By 2023, techcrunch.com jokes, Uber will be purchasing 2,500 driverless cars from Google. (The story was so convincing that an earlier version of my story took this as real; I got punked, but I wouldn’t be surprised if this comes true — and earlier than 2023.)

As Uber rides become more widespread and cheaper, there will be less need for people to own their own cars, Roose predicts. The company’s longer-term objective, he says, “has to do with what tech nerds call the ‘death of the ownership society.’”

Uber, Roose rhapsodizes, is “one of the fastest-growing companies on Earth…It’s making serious money…hiring like crazy…filled with experienced business operators and financiers…In San Francisco tech crowds,” he notes, “Uber is seen as the messiah… Plugged-in people in the Bay Area will tell you things that are hard to believe: Uber is the most exciting company in the Valley. Uber will be a $100 billion company in five years.”

Whew. Let’s dial down the heat and return to Miltown, where the announcement of Uber’s arrival was met with the Big Chill, an Old Milwaukee-styled mix of suspicion and hostility toward all things new.

“We’re fairly confident, at least on the face of it, they are a cab,” Milwaukee City Clerk Jim Owczarski told Fox 6, and “they made it crystal clear they have no intentions of complying with those rules and regulations.” Alderman Bob Bauman, chair of the Common Council’s transportation committee, said he’s asked the city attorney to file a lawsuit against Uber.

“Uber is a rogue application,” complained Red Christensen, spokesperson for United American Taxi, one of the city’s largest companies, part of the empire of Michael Sanfelippo. “Essentially, this company is not registered in the city of Milwaukee… and none of their drivers are licensed,” Christensen said.

Nope, taxicab companies and drivers and dispatchers do not like Uber. “A national taxi and limo association launched a campaign called “Who’s Driving You?” to pressure regulators to increase oversight of Uber and similar services such as Lyft and Sidecar,” the Boston Globe reported.

In Boston, as the Globe reported, police commissioner William Evans “likened Uber to ‘gypsy’ cab operations, which are unlicensed taxis that pick up fares on the street, and questioned whether the lack of oversight by his department meant ‘there could be Level 3 sex offenders driving.’” In Boston, Uber drivers with commercial livery licenses typically don’t undergo criminal background checks, as do taxi drivers.

But Boston Mayor Martin J. Walsh declared that “we also cannot condemn a popular, effective service like Uber,” contending it took “responsible steps to ensure the safety of their users.”

In Milwaukee, it seems, the city runs with such German efficiency that Mayor Tom Barrett doesn’t even need to address the rise of Uber alles. The issue was quietly dealt with by Owczarski, Bauman, Assistant City Attorney Adam Stephens and Deputy City Clerk Rebecca Grill. They met with representatives of Uber (“they had no business cards, you know young people never have cards,” Bauman grumbles) and were told that Uber would simply offer its Uber Black service, contracting with already licensed limousine drivers.

There are currently 148 such drivers in Milwaukee, Grill notes, and unlike in loosey goosey Boston, all limousine drivers here must under go a criminal background checks, just like cab drivers. Who says we lack a law-and-order mayor?

“It’s basically a limousine operation,” says Bauman of Uber. ”I told them as long as you’re using a licensed vehicle and licensed drivers that’s good. Some of their other platforms are straight out taxi services.”

I suspect Uber would disagree with that assessment, as with Bauman’s take on their prices. “They’re very expensive. $60 for Downtown to the airport. $200 for O’Hare to downtown Milwaukee. I’d never pay that.”

Because the company may at times charge by the miles traveled, that would put them under taxicab regulations, Bauman notes, but that would simply require a technical fix in the regulations which he would support, Bauman adds.

Elsewhere Uber faces some growing pains, Business Week notes: “a wrongful death lawsuit in San Francisco after an Uber driver hit and killed a 6-year-old pedestrian; several of its drivers are suing it over a payment dispute; and once-loyal users have been complaining loudly about price gouging.

“At extremely busy times, especially holidays, rates can be as many as seven times the normal price,” the verge.com reported. The company was accused of keeping current drivers off the road (on Valentine’s Day) in order to limit the supply and jack up rates.

But in Milwaukee, all is well so far in Uberland. As noted by Nick Anderson, Uber’s Associate General Manager in Milwaukee, and the man who apparently needs a business card, “the Uber app delivers lead generation for independent owners to increase earnings during otherwise underutilized time. Since arriving in Milwaukee, Uber has been embraced with open arms – and we’ve connected hundreds of riders to stylish, efficient and reliable transportation options.”

I’d like to try it, but frankly, I feel under-dressed.

-Uber may also be a boon to African Americans, who have long faced the problem of some taxis passing them by. “Jabari Davis, a black stand-up comedian, told wired.com he uses Uber in part to avoid the racial discrimination that still plagues regular taxi services. ‘Uber makes me feel like I belong,’ Davis says. ‘That kind of service is old-school. It’s like I’m a senator for 15 minutes.’”

68 thoughts on “Murphy’s Law: The Long Arms of Uber”