The area which is now the Beerline, looking toward the Humboldt Ave. bridge, was once a canal. 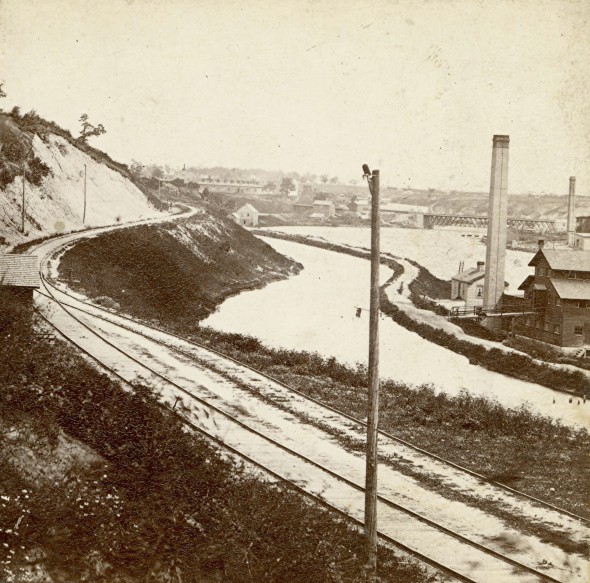 In the earliest days of Milwaukee water transportation was the only access to the rest of the settled world. Hence the city’s location at a point where three rivers meet Lake Michigan made a lot of sense. Byron Kilbourn, one of the city’s earliest settlers, looked to Washington DC for improvements in the Milwaukee harbor. But he and others also had a bigger vision, a canal to link Milwaukee to the Mississippi River.

This would be the Milwaukee and Rock River Canal. When completed it would follow the Menomonee River west and climb the sub-continental divide into the Fox River watershed in what now is Waukesha County. Then it would head through Nagawicka and Lower Nemahbin lakes and continue west to meet the Rock River at Fort Atkinson. A very ambitious plan.

Construction began in 1839 starting with a dam just east of where the Humboldt Ave. bridge is today. This early dam, constructed out of tree trunks and gravel, was much lower than the one which replaced it in 1891 and was subject to damage from flooding, but a section of the canal was completed, coursing over a mile to where McKinley St. meets the river. But that is as far as the canal was built. Squabbling over funding in the Territorial Legislature in Madison caused the project to be abandoned in 1842.

The resourceful Milwaukeeans, however, did find a use for the canal – for water power. The lower end, between Pleasant and McKinley, would soon be filled with flour and saw mills. And rail transportation, then in its infancy, arrived, with a rail line, seen in this photo, running along side the canal. It would later be of great use to the Schlitz and Pabst breweries for shipping beer. The rail spur would be aptly nicknamed the “Beer Line.” But water power would fade away and in 1884 the canal would be filled in and replaced with Commerce St.

Notice some of the details in this mid-1860s stereoview photo. In the background the relatively new Humboldt. Ave. bridge can be seen. South of the river Humboldt was named Racine St. for many years. The rail line is precariously cut into the steep bluff and the Milwaukee River is much wider. When the canal was filled in the bluff was cut down to provide fill for the canal and the river. Tanneries would then thrive in this area for many decades. Today this area, which was dubbed the Beerline redevelopment, is the setting for the Lakefront Brewery and many condominiums.