Decline of the Great Lakes

Ecologist and author James Ludwig talks about their dismal state and what can be done to improve the lakes. 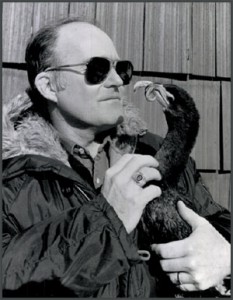 A portrait of Ludwig and his cross-billed cormorant. Photo courtesy of James Ludwig.

In his new book, “The Dismal State of the Great Lakes,” ecologist James Ludwig explains his personal and professional journey in realizing the extensive damage that has been done to the Great Lakes.

Ludwig, 72, spent the majority of his career studying chemical pollution of the Great Lakes and its effects on birds. In the 1980s, he gained notoriety for raising a cormorant named Cosmos, whose bill was damaged from genetic harm linked to pollutants.

Ludwig used the bird to communicate the hazards of chemical pollution to a variety of audiences, including members of Congress. Ludwig, originally from Port Huron, Mich., now lives in Canada where he writes and remains active in Great Lakes ecological matters.

Great Lakes Echo recently spoke with him about the challenges of fostering ecological concern in the public and the governmental channels that environmental restoration must travel.

GLE: You mention in your book that you were drawn to ecology because of the culmination of childhood experiences and opportunities you’ve had, like water-skiing and scuba-diving. And you also acknowledge that doing these things was a privilege. What are the challenges in fostering ecological concern amongst Great Lakes residents who may not have that privilege?

JL: “That’s a very good question, because I think that the vast majority of people don’t even pay attention to the lakes. They’re just kind of there. I remember talking to a man I met when I stopped in a rest area in Indiana one time, when I had my cross-billed cormorant with me. And he didn’t even think about the lakes. To him, they were just an encumbrance he had to drive around to get to where he worked in Michigan City from Illinois. The lake was just a barrier. And what you find is that it’s even harder to appreciate the lakes when they’re polluted, and when they’re covered in algal blooms.”

GLE: In the book, there are quite a few jarring images of visible damage – one of a black-footed albatross embryo with a very severely crossed bill and missing right eye, one of Naubinway Island absolutely covered with mussel shells. Does imagery help in creating concern?

JL: “That was very much the strategy I employed when I was most active around the lakes twenty years ago. That’s why I raised a cross-billed cormorant, that’s why I took pictures of birds dying from PCB symptoms. Visual images are very, very potent. We all subscribe to the idea of ‘if you can see it, you can believe it.’” 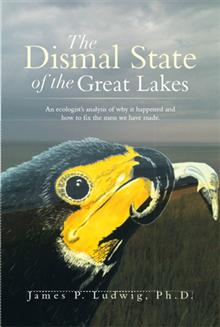 In his book, Ludwig points to broader political constructs and governmental sluggishness as culprits of Great Lakes damage. Photo courtesy of James Ludwig.

GLE: So how do these images get distributed to people who, need to see them – those who, at best, feel neutral towards the lakes and at worst, view them as a hindrance?

JL: “You know, I think about what they’ve done with cigarettes here in Canada – they put images of people dying from various kinds of cancer right on the cigarette packs. And I’ve often wondered if we can’t do something similar with mass media – like on the sides of buses. Public service announcements on television are very potent. I don’t see any reason why that couldn’t work.”

GLE: You state several times that neoliberalism is at the heart of the Great Lakes’ pollution. There’s this one sentence in particular that really stuck with me, which was, “Human commerce is very sloppy.”  But if that’s the case, how can you balance economic recovery with environmental recovery?

JL: “It’s very interesting; when you go back and look at the Great Depression, when Roosevelt took office in 1933, it was something to the tune of 25 percent of the American workforce was out of work. Three or four years later, he had his Works Progress Administration up and he had millions of people earning a small wage, but still well-employed, planting trees which would become national forests, building dams.

All over the country, people were put to work. And I don’t see any reason that they couldn’t do that now. What drives the economy is consumerism and people consume when they have money in their pockets. We need to rethink the way we view work.”

GLE: What would you tout as the biggest success in combating a long-term problem with the lakes?

JL: “Probably the biggest success we’ve had goes back to the 60s and 70s. In 1972, we passed the first comprehensive Clean Water Bill in the United States, and at the same time, we signed the Great Lakes Water Quality Agreement. They were both signed within a week, as a matter of fact.

The major focus of the first comprehensive Clean Water Act, in 1972, was to remove phosphorous from sewage treatment plants, and to control phosphorous from as many other sources as we could. Lake Erie was a green soupy mess, from phosphate detergents and unregulated use of phosphorous. The Clean Water Act and its companion act with Canada, over the next 20 years, cleaned up the lake. Lake Erie recovered amazingly well once those nutrients were removed. We went through a period of spectacularly improved water quality, before the mussels came along and reversed a lot of that.”

GLE: Your book notes that restoration depends on action at the highest levels of state, federal and international government. How optimistic are you about seeing more restorative action soon?

JL: “I’m not very optimistic at all, not with our current governmental structure. Another aspect to that problem is how fractured government is, how it’s broken into so many pieces. If you wanted to teach a class, and you decided you were going to divide your time teaching amongst seven different subjects, giving each subject five minutes apiece – how effective do you think that’d be?

That is exactly what we’ve done with regulation on the Great Lakes. We have seven different cabinet-level divisions of government, and the last time I counted, there were 37 distinct programs that I could find in those divisions. Each one has its own individual bureaucracy. They don’t necessarily speak with one another. It used to drive me crazy when I worked with the EPA in the Great Lakes. People in the Great Lakes National Program office in Chicago never talked to the people in the regulatory divisions. The only thing that separated them was that they were on different floors in the same damn building.

The book can be purchased through Ludwig’s site here, or through the publisher’s site here.