The changes aren't radical but big winner is Ald. Kovac, who becomes chair of Finance and vice-chair of Steering and Rules. 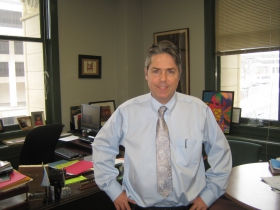 Ald. Michael J. Murphy, newly selected President of the Milwaukee Common Council, announced his committee assignments today. Prior to his selection at Tuesday’s Common Council meeting to replace President Willie Hines, who resigned for a job as Associate Director of the Housing Authority of the City of Milwaukee, Murphy had served as Chair of the Finance and Personnel Committee and as member of the Zoning, Neighborhoods and Development Committee and the Steering and Rules Committee.

The 10th District Alderman will keep his Steering and Rules seat but move to the head of the table as its chair. The committee, which rarely meets, is composed of the president and the chairs of the Council’s 7 standing committees. It is traditionally the only committee to which the president belongs.

Replacing Murphy as Chair of the Finance and Personnel Committee is former Vice Chairman Nik Kovac. This move was not unexpected.  Joining the committee is Ald. Terry Witkowski. Alds. Joe Dudzik, Ashanti Hamilton and Milele Coggs remain on the panel.

Murphy added Ald. Jose Perez as the new Vice Chair of the Zoning, Neighborhoods and Development Committee, replacing Ald. Willie Wade, who remains a member of the board, as does Chairman Jim Bohl and Ald. Bob Bauman. Ald. Witkowski is now off the committee, and is replaced by Ald. Kovac.

At the Community and Economic Development Committee there was a reshuffling of the existing hand. Ald. Perez is out as Vice Chairman, but remains a member, as does Ald. Wade, who now has the Vice Chairman job. Members Joe Davis, Tony Zielinski and Hamilton remain.

Alds. Hamilton and Witkowski continue as Chair and Vice Chair of the Judiciary and Legislation Committee, but Alds. Bob Donovan, Davis, and Robert Puente have been replaced by Alds. Bauman, Coggs, and Zielinski on the committee.

Ald. Perez is off the Licenses Committee, replaced by Ald. Puente. He is joined by continuing members Ald. Zielinski as chair, Ald. Coggs as Vice Chair, and Alds. Kovac and Dudzik as members.

Alds. Witkowski and Puente continue as Chair and Vice Chair of the Public Safety Committee, as does Ald. Davis. Alds. Bohl and Bauman are off the committee, replaced by Alds. Donovan and Dudzik.

Ald. Bauman continues as Chair of the Public Works Committee. Ald. Donovan will relinquish his Vice Chairman position, but remain on the committee. Ald. Wade will step up to the Vice-Chairmanship, and Ald. Bohl will remain a member, as will Ald. Donovan. But Ald. Puente is off the panel, replaced by Ald. Davis.

There will likely be another change in committee assignments after the 15th member of the council is chosen.

In addition to his power to select committee assignments, the president of the council has two positions to fill on his office staff. In an interview in his office Wednesday, Murphy said a decision on those jobs will be made in the next two or three weeks. Murphy says he expects to continue as the Chair of the Investment Committee of the Employes’ Retirement System of the City of Milwaukee Annuity and Pension Board, Chair of the City of Milwaukee Arts Board and member of the Housing Trust Fund. Murphy sponsored the legislation establishing the fund.

The Common Council President is also entitled to sit on the board of the Wisconsin Center District, where Hines had served as Secretary.

Murphy added that election dates have been set to find a replacement alderman for the 15th District seat vacated by Hines. A primary election will be held April 1st. That is the day of the Spring General Election for non-partisan offices. [There was no need in the City of Milwaukee for a February 18th  Spring Primary since there were no more than two contenders for any office.] The General Election in which the 15th member of the Council will be chosen is set for April 29th. The member would serve until April 2016.

As of Wednesday, 5 candidates have announced for the seat. First out of the gate was Eyon Biddle, Sr., a former County Supervisor who lost a quixotic challenge to Hines in the 2012 election. Biddle filed his declaration of candidacy on February 4th. Current County Supervisor Russell Stamper II filed his papers on February 7th. Deshea Agee and Patricia Ruiz-Cantu filed on February 10th, and Vera Davis registered her campaign on February 12th.

Nomination papers may be circulated immediately by those candidates who file a certificate of registration with the City Election Commission. Candidates have until March 4th at 5 p.m. to file between 200 and 400 valid signatures. 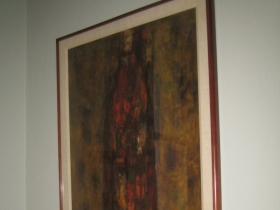 In addition to shuffling committee assignments, Murphy will also initiate a round of musical chairs in the suite of 2nd floor offices of the council members and staff. Currently, Murphy occupies an office on the building’s northeast corner, a vestige of his durability as the longest-serving member of the body. He has represented the 10th District since a Special Election in 1989. The room to be vacated has a desk, a conference table and some bookshelves, on one shelf of which is displayed a number of interesting fossils and minerals. If the room goes to the longest-serving member of the council, as in Murphy’s case, there is a tie between Alds. Donovan and Bohl, both elected to the council in the regular election of 2000. The room’s most notable feature is a painting of City Hall by the late Milwaukee artist Joe Friebert. Murphy will probably take that with him when he moves across the suite to his new office on the northwest corner of City Hall, reserved for the Council President.

That room has a number of interesting features, including a 19th century clerk’s file that probably predates the 1895 City Hall. An inspection of the drawers show they were fashioned by hand. Hines left behind the office furniture, and a useful copy of Robert’s Rules of Order, that secular Bible of the legislative industry. Hines’s calendar is the only thing remaining on the desk; it is open to January 31st, his last working day in office. Most notable are a half-dozen or so houseplants, some quite large, and all perfectly tended. Whether Murphy will add “Green Thumb” to his resume remains to be seen.

City Clerk Jim Owczarski says there is a small budget to clean and paint vacant council offices, and that the president’s new space should be ready within the next few weeks. 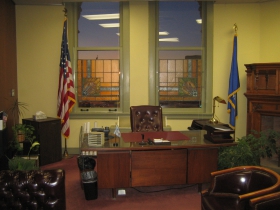 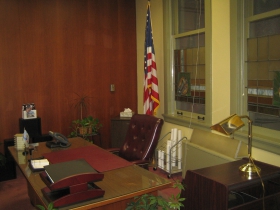 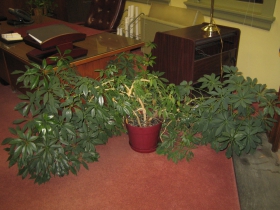 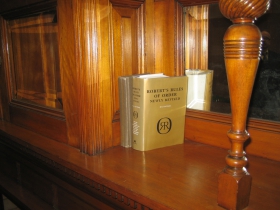 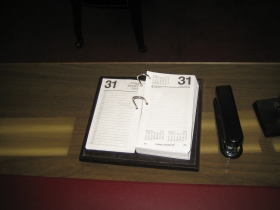 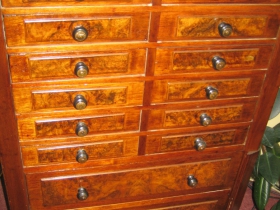