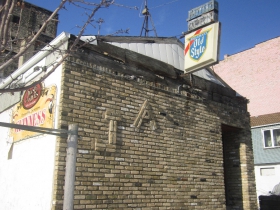 An Old Style sign hangs over the entrance to Just Art’s. Photo by Kristyn Coral Botic.

Arthur (Art) Guenther, the owner of Just Art’s Saloon (181 S. 2nd St.) is the sort of guy who held a celebration of his heart attack thirteen years after he survived the scare. He had fliers printed up for the event which read: “Nothing says party like an ol’ heart attack!” and inviting people to come down for “deadly good fried food” and drinks to “celebrate the anniversary of the near demise of Art Guenther.”

Guenther runs what is considered by many to be the city’s classic dive bar, a tiny little shack with a shabby, plain Jane atmosphere that personified the once down-scale Walker’s Point neighborhood before it was rediscovered.

Guenther opened the place on July 11th, 1980. Previously it was a gay bar called “Flame” – which, ironically caught fire and closed. Guenther brought it back to life with a buddy, added windows and a kitchen – and before he knew it – Just Art’s Saloon became a new hangout for a certain kind of clientele.

Craig Peterson, longtime PR man and owner of Buffalo Water Beer Company, has been a regular for years, and says the customers come in two shifts. From 4 p.m. to 6 p.m., he says, there are the regulars, “Downtown business people, lawyers, developers. After 6:30 it’s packed with millennials looking for a good deal.”

It’s also a hangout out for plainclothes police officers. “You never want to go in there and rob the place,” says Peterson, “you’ll probably get shot.”

The drinks are cheap. “We are a big fan of shots here” says Guenther. They have fifty cents off drinks during Happy Hour from 4-7 Tuesday through Saturday.

The food is cheap, too. $1 hot dogs on Thursdays, free pizza on Wednesday, and Friday fish fries for $9. “On Friday nights he puts out free hors d’oeuvres and it’s quite a spread,” Peterson says.

“All of my bartenders have great personalities” Guenther says. “Personality is what brings ‘em back.” 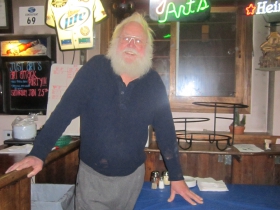 But the chief personality is white-bearded, wisecracking Art, who “may be the most interactive bartender you will ever encounter,” according to the Shepherd Express. Says an online reviewer at Yelp.com: “Art makes you feel like a part of his disfunctional little family!”

The area surrounding Art’s has changed dramatically in the three decades he’s owned it. But he seems unconcerned. “Everything is constantly changing, popular areas come and go,” he notes. But his customers are loyal. “If you have one person that really likes the place” he notes, “then next time, they might bring their friends, and those friends might tell their friends about us, and there’s how you get people to keep coming back.”

The bar does offer some fun and games. “We toss a lot of dice here” Guenther says as he rolls with a regular sitting at the bar. Aside from bar dice tournaments, the bar has a foosball table, darts, and a beautiful deck with a bar in the back, which sometimes has live music when the weather turns warm.

Every month there is a theme night: February is cabin fever, and March will of course have a Saint Patrick’s Day theme.

“Hundreds of couples meet at my bar.” Guenther says. “They come and tell me ‘hey’ – you introduced me to my wife!”

A regular at the bar quickly chimes in, “and you introduced some to their ex-wife!” which brings a round of laughter from everyone around at the bar.

Art has been working for 33 years, is unmarried, and often threatens to sell the bar. “I just want to retire, get an RV and drive into the sunset,” he says. Then he’s off to pour another drink, delaying that retirement for yet another day. 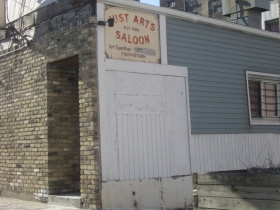 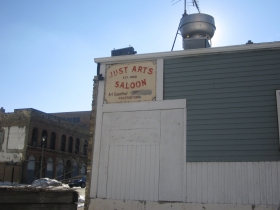 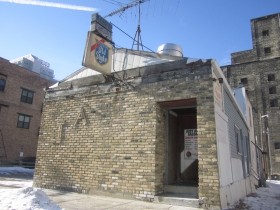 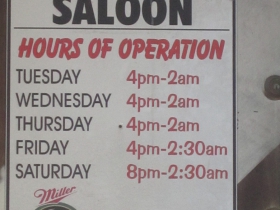 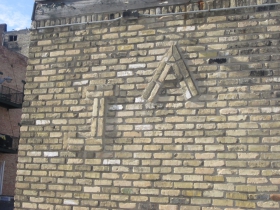