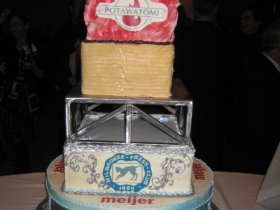 The event, held Thursday, January 30th, was subtitled “6 Degrees of Milwaukee: Connected for 168 Years.” It anticipated by one day the 168th anniversary of the incorporation of the Town of Milwaukee as a City by act of the legislature of the Territory of Wisconsin. The act was signed into law on February 3rd, 1846 by the Territorial Governor, who, as every schoolchild knows, was Nathaniel Pitcher Tallmadge, former New York senator.

Over 200 people forked over $35 apiece to attend the festivities, a scholarship fundraiser billed rather brazenly as the “City’s #1 Networking Event.”

The “6 Degrees of Milwaukee,” was embodied in the form of the “Milwaukee 6 Pack.” This consisted of what the press club called, “Milwaukee’s most well connected individuals! Because when it comes to Six Degrees of Separation, it’s all about who you know.”

And who are these must-know people that “you tell all your new contacts they should meet? Who is always a mutual friend on Facebook? Who … you see every time you attend an event?” 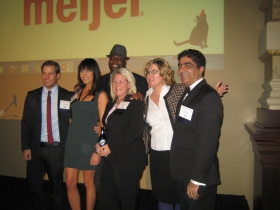 The Honorees of the Six Pack. Photo by Michael Horne.

(I know what you’re thinking! I’ve never heard of these folks, either, except for the judge.)

They were joined by many hundreds of fellow citizens, with a fair dose of reporters, and the far-more-common subspecies of former reporters, politicians, lawyers, developers and other such worthies.

Mayor Barrett of course was there, joined by his wife Kris Barrett. I asked the mayor what he thought of my idea that Scott Walker should give some of his tax surplus to defray the looming deficits in the snow removal budgets of communities of every size throughout the state. He could also allocate some to reimburse the emergency infrastructure expenditures necessitated by the many water main breaks that resulted from the season’s extreme cold.

“I wouldn’t be opposed to it,” the mayor said.

But don’t count on it happening, unless the Governor could find a way of excluding the city from his largesse. Three days earlier the Governor offered $8.5 million in relief for those who use propane as heating fuel. Of course people with propane tanks in their back yards tend to not live in Democratic-voting cities like Milwaukee. 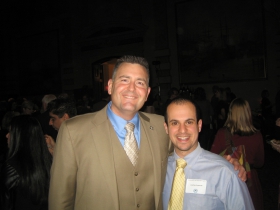 Milwaukee County Board Chair Marina Dimitrijevic was also there, as was County Executive Chris Abele, [“Sis” and “Nemesis”] as was Jonathan Brostoff, the chair’s rival to replace Jon Richards in the assembly.  Alderman Bob Bauman was joined by colleagues Michael Murphy, Terry Witkowski and Nik Kovac, who was accompanied by Grace Fuhr, district secretary to Sen. Chris Larson who was also in the house. Milwaukee homicide detective and County Sheriff candidate Chris Moews attended. He said he will be keeping his two sons busy in the upcoming months planting yard signs and hanging flyers on voters’ doors as he seeks to unseat incumbent David Clarke (a no-show) in the August Democratic primary.

Laura Gramling Perez, a judicial candidate, retained her spirits despite being un-endorsed that day by Ozaukee County Judge Joseph Voiland for having signed the Walker recall petition. Meanwhile, Cedric Cornwall, her challenger in the April election, was not present, as he was holding a fundraiser at Best Place at the Pabst Brewery.

Chief Edward Flynn was there in his dress uniform. I told him I don’t think any police chief in the country could have as effectively spoken as he did in the wake of the theft of Frank Almond‘s Stradivarius violin. “It is a personal crime, it is a property crime and it’s a cultural crime,” he told me, adding that the symphony is one of this city’s affordable pleasures. 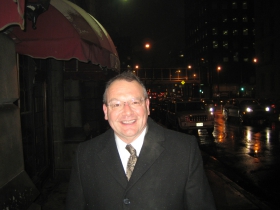 While automobiles rode up to the entrance of the building to take advantage of $10 valet parking, others arrived on foot, including Department of City Development Commissioner Rocky Marcoux.

We spent a moment looking across the street at the Loyalty Building, recently transformed into the Hilton Garden Inn Downtown, one of a number of new hotels that have added considerable vitality to the downtown scene. A lower-level corner space in the building had remained unfinished by the developers in hopes that it might be rented to an outside operator as a restaurant.

But over the course of the last month or so the space was finished and carpeted with the Garden Inn’s trademarked fabric and is used as a meeting room for the hotel.

“That’s not a bad sign,” Marcoux explained, noting that the hotel management may have underestimated demand for meeting space in its initial plans. There is plenty of vacant space remaining for restaurants. We entered the building through the Swingin’ Door Exchange, which has been thriving as a bar and restaurant since nearby developments have come on line.

Milwaukee Magazine editor Kurt Chandler was there, paying his first visit to the magnificent 135-year old room which brought to this city its only moment of worldwide commercial importance, a brief period in the mid- to latter portion of the 19th century where the global market for the nation’s grain supply was conducted there. Its florid decoration also serves as a reminder that the ‘Change, as it was called, was also a place for untrammeled commodities speculation for the wealthy and poor folks alike. People would line up to be fleeced, whether for $10 or for $100,000. 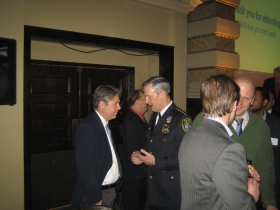 There was a cash bar with a discrete selection of free beers, including Buffalo Water Bison Blonde, brought by Craig Peterson, the owner of the beer line. He offered one to Chief Flynn who declined it (we don’t drink in uniform in this town).

The centerpiece of the room was an ambitious cake about the size of a Rose Bowl Parade float, except that this one was covered by advertising. The top-of-the-cake sponsor was, fittingly, the Potawatomi Bingo Casino, the night’s “Lead Presenting Sponsor,” while “Headline Sponsor/Publisher” Meijer, a Grand Rapids grocer that plans to enter the Milwaukee market this year, got the bottom layer of the confection.

Guests dined at tables that included Usinger Sausage, undistinguished cheeses, sandwiches of Salmon, ground or roast beef, pasta in cream sauce and a salad that paid tribute to Caesar.

[Copy of the Act authorizing the incorporation of the City of Milwaukee, 1846.] 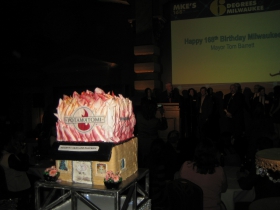 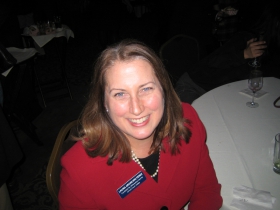