The Mystery of the Stolen Violin

Who owns the Stradivarius stolen Monday night? The story of a violin worth millions. 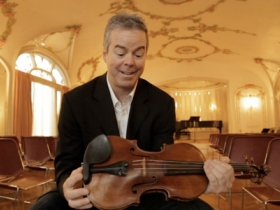 It’s one of the biggest mysteries the city has seen in some time. Where is the Lipinski Stradivarius? And just who owns the instrument on loan to Frank Almond who lost it in a strong-arm robbery Monday night?

Almond, the Milwaukee Symphony Orchestra’s Concertmaster or first violin player, was attacked by someone using a stun gun in an apparently coordinated post-concert attack, which has raised these questions.

First, “Whodunit?” This is not an ordinary caper. It happened at the Wisconsin Lutheran College where Almond had performed one of his popular “Frankly Music” performances. Afterwards, he was attacked in the parking lot of the quiet campus. The violin was the sole target. The instrument is generally conceded to be worth millions and impossible to sell. Strads have only rarely made an appearance in this city.

Almond has played this 1715 instrument since 2008 when it was loaned to him by a Milwaukeean who chose to remain anonymous — and that’s the second question, “Whose is it?” 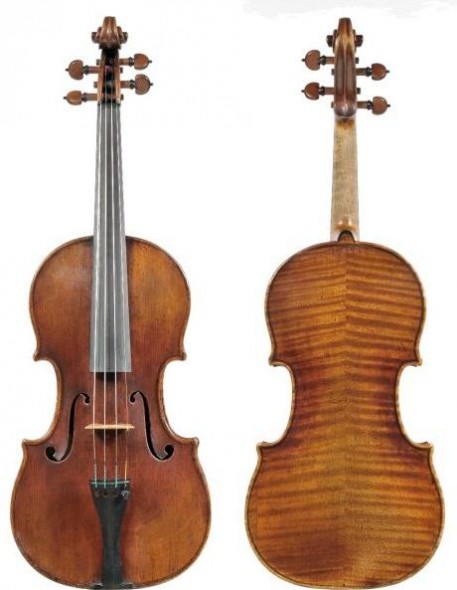 In a 2008 Milwaukee Journal Sentinel article by Tom Strini, Almond said he received an unexpected e-mail inviting him to the vault of the M&I Bank [now BMO Harris Bank] to look at the violin. The article traced the ownership of the Stradivarius from its first known owner, Giuseppi Tartini, to its last known owner, Richard Anschuetz of Milwaukee.

Anschuetz was born in Missouri, in 1913 where his father Hugo was a choral conductor. After European schooling, and a brief interment in Germany in 1940, Anschuetz settled in New York City in 1952 with his violinist wife, Evi Liivak. The violin was a gift to Liivak from Anschuetz’s mother, Rosalind Elsner Anschuetz, who bought it in 1962 for $19,000. She was the daughter of Richard Elsner, the first Socialist Civil Judge in Milwaukee County. Anschuetz and Liivik toured with the violin for 40 years.

Liivak died in 1996, and the violin “dropped out of sight,” according to one account. So did Richard Anschuetz, who had moved to Milwaukee to be near family.

He died on February 15th, 2008 at 94, leaving an estate of nearly $3.4 million. The personal representative of the estate, and possibly the only heir to the estate, was Anschuetz’s sister, Charlotte A. Bleistein, who shared an address with the descendent, and was presumably the family he came to Milwaukee to be near.

Evidence points to her as the likely current owner of the now-missing violin.

Charlotte Bleistein, who is now 98 or 99, has an interesting story of her own. Following her grandfather’s example, she became an attorney, graduating from the University of Wisconsin with an AB in 1936 and a JD degree in 1939. Her initial specialty was labor law, which fits in with the family’s progressive tradition. She later represented dozens of estates in probate court, with an active caseload as late as 2004.

At the 2006 funeral of former Mayor Frank P. Zeidler, Bleistein addressed the attendees as a representative of the city’s Socialist Party, talking about the “aplomb” with which he conducted meetings. In November, 2013, she attended a ceremony for the dedication of a tombstone for John A. Maxwell, who ran for president on the American Vegetarian Party ticket in 1948, and whose grave had been unmarked since his death at 100 in 1963. Her grandfather, Judge Elsner, had been a fan of Maxwell’s Milwaukee Leader column on natural foods, she told reporter Jim Stingl.

Although we cannot confirm the owner of the Stradivarius, we do have this message from the owner as recounted in Strini’s article of 2008:

“A violin needs to be played and regularly looked after by experts in order to remain in great shape. An instrument like this is part of the cultural inheritance of us all and should be enjoyed by as many people as possible. The family is thrilled and honored that the violin is a good match with Frank Almond and that it can remain in Milwaukee, where many people can enjoy hearing it on a frequent basis.”

Almond has placed an alert for the missing violin on his website: “Anyone with information about the whereabouts of the “Lipinski” Stradivarius violin following the robbery on 1/27/2014 should call Milwaukee police at 414-935-7360 or the Milwaukee Symphony Orchestra at 414-226-7838. A reward offer is pending and information will be made available once confirmed.”

Almond posted this note on his Facebook account this afternoon: “Dear friends- thank you all so much for your enormous outpouring of concern and support. Please forgive me if I haven’t been able to get back to you individually, but events have been very hectic. It’s been a challenging week so far, and your comments and postings have meant a great deal to me. Thank you all again, and I hope at some point I can post better news.”

Not the Only Stradivarius Entrusted to Almond

While with the Fort Worth Chamber Orchestra, Almond used the Davis Stradivarius, named after its owners, Mitzi and Bill Davis, who lent it to the orchestra in 1981. In 2010 its value was estimated as high as $8 million.

Almond also played the Dushkin Stradivarius for some time with the Milwaukee Symphony Orchestra. In 1995 it was listed as belonging to Angela Gibbs Johnston of Milwaukee. Its owner is now anonymous. Johnston was once married to State Senator Rod Johnston, a Republican lawmaker who lost the 1982 congressional race to Democrat Jim Moody. Their daughter, Kristin Johnston, is an actress [“3rd Rock from the Sun”].

Angela Johnston married Robert L. Caulfield, the executive director of the Milwaukee Symphony Orchestra and manager of WFMR-FM radio, in 1983 and separated in 1991. In their contentious 1994 divorce proceedings, Judge Dominic S. Amato ruled in her favor in virtually every issue, saying her husband took “economic advantage of her love for him,” and ruled that Caufield had “no claim on the proceeds of the sale of a $2 million Stradivarius violin in 1991.” How this comports with Johnston’s ownership of the Dushkin Stradivarius in 1995 is hard to say. Maybe she bought two.

Frank Almond plays “The Devil’s Trill” on the Lipinski Stradivarius

Leonard Sorkin, the founder of the Fine Arts Quartet also played a Stradivarius early in his career. In 1984 Milwaukee Sentinel columnist Alex Thien quoted contributor Leo Kissel remembering that at one time after a night of partying in Chicago with friends, Sorkin realized he had left his violin behind. He raced back to the shuttered nightclub, told the janitor his violin was missing. The janitor replied, “well we found one. And now I suppose you’re going to tell me it’s a Stradivarius.”

Mischa Elman played his famous Recamier Stradivarius in Milwaukee at the Pabst Theater on March 18th, 1930 in a benefit concert for refugees of Nazi Germany. Proceeds were distributed to sponsoring Catholic, Protestant and Jewish social service agencies.

A 1902 Milwaukee Journal article wrote about the $20,000 violin collection of Milwaukeean David H. Carr, which was said to include a Stradivarius.

In 1927, Wallace B. Whitcomb, a Milwaukee instrument repairman, planned to travel to London to authenticate his Stradivarius, redeemed from a New Orleans pawnshop, according to a Milwaukee Journal story. Whitcomb valued the instrument at $15,000, and hoped a guarantee from Hill of London would raise its value to $30,000. He told the reporter that “he never trusts it out of his sight. When he leaves the shop, it goes home with him every night.”

Elmar Oliveira played his Stradivarius in a performance with the Milwaukee Chamber Orchestra in 1984. Many others have brought their instruments to town.

But local ownership has been rare indeed. We can only hope the stolen instrument is recovered.

6 thoughts on “Plenty of Horne: The Mystery of the Stolen Violin”