Public Weighs In On Lakefront Project

Information meeting at Public Market had a full house. There's still time to add your views to the discussion.

A steady turnout of interested citizens showed up at the Milwaukee Public Market, 400 N. Water St. on Thursday, January 22nd for a Lakefront Gateway Project Public Information Meeting staffed by Wisconsin Department of Transportation and City of Milwaukee officials, including Commissioner of City Development Rocky Marcoux.

The Lakefront Gateway is designed to re-engineer the spaghetti of freeway ramps that lead to the Hoan Bridge. These ramps, running east-west from the Milwaukee River to the Lakefront, are being rebuilt as part of the project to reconstruct the Hoan Bridge. It is expected that a reconfiguration of the ramps will open the Lakefront to more development, provide better access to the Lakefront and its attractions and provide an attractive entrance to the Historic Third Ward, long walled off on its north side by the expressway. The project aspires to be significantly more pedestrian and bicycle friendly than the current 1960-1970s era construction.

Visitors were treated to numerous displays showing the present and proposed configuration of downtown streets affected by the changes, most notably E. Clybourn St. which is to become a boulevard. Today, its eastern terminus dies in ignominity.

There are still some details to be worked out from a number of alternate proposals, and attendees were welcome to add their comments for review by the staff. [Readers can do so by clicking on the link above.]

Kris Martinsek, organizer of the event, said she was pleased at the full-house turnout. She said she relied on media reports, flyers and post cards to draw attention to the event.

There were numerous sightings of developers and others who would have an interest in the project. This is not entirely coincidental, since a number of these folks reside in the Third Ward, or work there.

Meanwhile, demolition of the old elevated freeway continued right outside the market. You’ll find photos of that here. 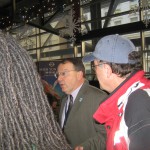 Rocky Marcoux explains some details of the Lakefront Gateway Project at a public hearing at the Milwaukee Public Market. [Photo taken January 22nd 2014 by Michael Horne.] 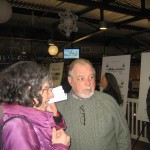 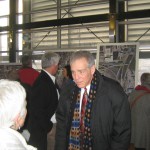 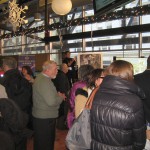 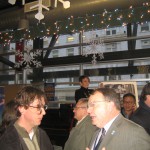 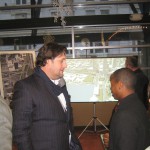 Rick Barrett at the public meeting.

4 thoughts on “Public Weighs In On Lakefront Project”