He's got Abele's backing for the Milwaukee legislative seat, while Barrett backs Dimitrijevic.

A fundraiser for Assembly candidate Daniel Morgan Adams drew a large crowd of downtown attorneys and other supporters to the Belmont, the Cathedral Square bar, on on Thursday, January 22nd. Headliner Chris Abele, the Milwaukee County Executive, said the Democrat represents the best choice for the 19th Assembly District seat now held by Jon Richards, who is running for Attorney General.

Abele praised what he called the “real world experience” of the former assistant District Attorney who is now in private practice at Adams, Urfer, LLC. “It’s not about who sucks up to him,” Abele added.

Abele stresses that he doesn’t “care what letter is behind your name,” when it comes to “D” or “R” politicians, but whether the officials can work across the aisle. “Dan’s the right guy and I will do everything I can to help him win.”

Adams returned the favor by calling Abele “the epitome of a public servant.” He thanked the attendees for braving the chilly weather to show up at the Belmont for his event, which featured a cash bar and a bunch of bags of chips that remained largely untouched. “Its so cold even downtown lawyers have their hands in their own pockets. Now I have my hands in the lawyers pockets,” he joked as he made an appeal for funds.

He agreed that he would try to find consensus should he win the election. “Reasonable people can have disagreements. It doesn’t mean their opponent is bad or evil.”

But, he said, something happened in the last 5 years in Wisconsin where we cannot embrace the others’ points of view, as the name “Walker” rippled through the crowd.

Kovac was asked about the Lakefront Gateway project. Was it a good compromise? (The plan does not include a bicycle lane on the Hoan Bridge, for example.) He said, “it’s not a good compromise, but it is the best we could get under the present state administration.” And we will live with it for another 50 years.

Other candidates for the seat include County Board president Marina Dimitrijevic, who will certainly not be pleased to know that her colleague Alexander was at the event, Jonathan Brostoff, who took a leave of absence from his position with Sen. Larson as his district director to devote full time to the campaign and Sara J. Geenen, an attorney with the Previant labor law firm.

With Mayor Tom Barrett endorsing Dimitrijevic for this seat, we have a battle of coat tails between the mayor and county exec. Unless f course, either Bostroff or Geenan wins the primary election.

That election, by the way, will be held August 12th, 2014, on which date the victor will likely be determined in the heavily-Democratic district. There are no runoffs in Wisconsin, so 25 per cent of the vote may take the cake. The general election is scheduled for November 4th, 2014. 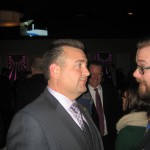 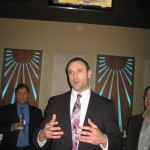 An appeal for funds is made on behalf of the candidate. [Photo by Michael Horne January, 22nd, 2014] 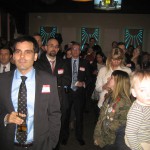 An audience of mostly downtown-based attorneys heard from their colleague Dan Adams, who held his first fundraiser for his Assembly campaign Thursday, January 22nd, 2014 at the Belmont. [Photo taken January 22nd, 2014, by Michael Horne] 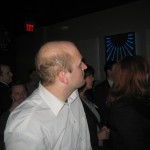 Ald. Nik Kovac, who represents the home district of Assembly candidate Dan Adams, listens to him speak at his fundraiser at the Belmont. [Photo taken January 22nd, 2014 by Michael Horne] 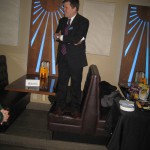 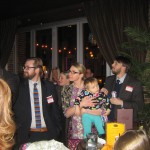 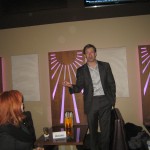