Arrest Those Who Bike in Winter, Mayor Says

Comments from Watertown, NY official raise serious issues about how bikers are treated, including in Wisconsin.

By Dave Schlabowske, Bike Federation of Wisconsin - Jan 17th, 2014 11:03 am
Get a daily rundown of the top stories on Urban Milwaukee

Earlier this week on his during his regular “Hotline” radio show, Mayor Jeffrey Graham of Watertown, New York (population 27,000), declared that people who ride bicycles in the winter should be arrested.

“I know I’m going to get in trouble for this: People who are on bicycles out on streets like this — they should be arrested,” I mean, that is a clear and present danger that is being created, and if you’re going to sit there and make the argument that texting while driving is reckless, doing that is reckless and it creates a danger for them and the motorists.” 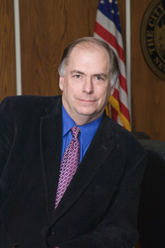 Despite making headlines around the county since, Mayor Graham has stood by his statement that people like me are reckless. Graham has even ignored local reporting after a Watertown man who has to ride bicycle to work because he suffers from seizures, was the victim of a hit-and-run. The mayor even expanded his comments to include people in wheelchairs and anyone pushing a baby stroller who have to take to the streets because the sidewalks are not shoveled.

I’ve been thinking about this in light of my column last week about the state’s decision not to maintain the Hank Aaron State Trail in the winter. This mayor’s comments made me thankful I live in a more enlightened community. I guess we have a lot easier battle to fight than people in Watertown.

There are no police out there enforcing the rights of people with disabilities, let alone people who ride bicycles. And if there were, federal and state rules are pretty weak when it comes to clearing walkways of snow. Here is the federal guidance:

A public agency must maintain its walkways in an accessible condition, with only isolated or temporary interruptions in accessibility. 28 CFR §35.133. Part of this maintenance obligation includes reasonable snow removal efforts. (9-12-06)

Municipal rules tend to be more strict. The Milwaukee ordinance requires property owners to clear walkways of snow or ice within 24 hours after the snow and ice have stopped falling. Violators who are reported to the Department of Public Works are issued a notice to clear the walk and will be assessed an initial inspection charge of $25 for the first notice, $45 for the second notice and $90 for subsequent violations per City Ordinance 116-8. If the sidewalks still are not clear the next day, a sanitation crew will clear a path on the walk, and the charge will appear on the property tax bill.

Since the Hank Aaron State Trail functions as the sidewalk for Canal Street, the city ordinance is pretty clear that the state is required to maintain it in the winter. Beyond that, because the City of Milwaukee agreed to own the bridges on Canal Street, the state and city have a formal Memorandum of Understanding about the Hank Aaron which makes clear the state’s responsibility to clear the trail of snow and ice. 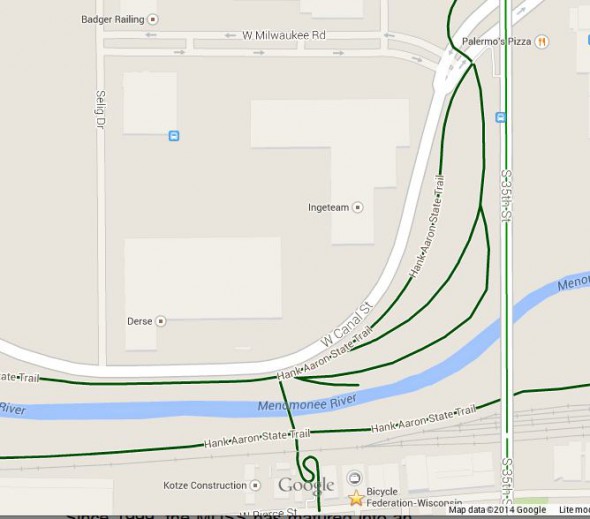 I requested that the state clear the trail from Selig Drive, where there is a curb ramp, to the intersection with Milwaukee Rd, just west of Palermo’s. The city does a good job on the rest of the trail to the east, since it functions as a walkway and much of it abuts their property.

Given the city ordinance, and the MOU, it seems like Milwaukee could take the stance that if someone made a formal complaint that the walkway along Canal Street was not being plowed, sanitation workers would clear the path and charge the State for the work. People can make requests to get sidewalks or bus stops shoveled online here or by calling the city’s Call Center at(414) 286-CITY (2489). If you want to use the Hank Aaron State Trail this winter, feel free to file a similar complaint.

I filled in a request to get the walkway along Canal Street plowed. I reported the problem at the intersection of W. Canal Street and Selig Drive, but because I am reporting a long section of walk that needs plowing, I added this description:

The Hank Aaron State Trail functions as a sidewalk along Canal Street, and the WDNR has not been plowing a path on it from the curb ramp at Selig Drive all the way to W. Milwaukee Road.

These complaints are logged, and I am sure someone will follow-up on it. I got an email response immediately after filing the service request and my case ID number is 101000667710. I will let you all know what I hear back. At least I don’t live in upstate NY and have to worry that I will be arrested for filing the complaint!

5 thoughts on “Bike Czar: Arrest Those Who Bike in Winter, Mayor Says”