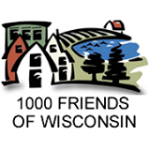 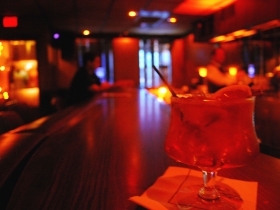 Start a conversation with any Chicago cocktail snob about cocktail lounges and they’ll reel off a long list of such bars, just off the top of their head. In Milwaukee, there are only a handful of places that offer the real thing. Many would put Bryant’s Cocktail Lounge atop the list. It’s been around almost 80 years, which is a key part of its appeal: History.

John Dye, proprietor/bartender/community developer, bought the near south side bar five years ago. But he took a long time to make that decision. “I was the first person to come look at this place when it was up for sale,” Dye recalls. “I stepped back and asked myself if I wanted to dedicate myself to this city.”

A native of Montana, Dye came to Milwaukee to attend Marquette University and eventually found a home here. In 2008, while pondering whether to stay in Milwaukee, the lounge still intrigued him.

“Almost two years went by, and it was still on the market,” Dye says. “I was like, ‘Okay, it’s kind of just sitting here for me.’ It’s the best decision I’ve ever made in my life.”

With a scruffy face, bright, eager eyes, and indelible smile, Dye looks the part of a bar man. It’s also helps that he seems to own only vintage clothing.

Earlier this year, Esquire wrote up Bryant’s as one of the top places to get a cocktail in the country, in a review that saluted its unique style: “Bryant’s may be the darkest bar in America: Your check comes on a little lighted tray,” the magazine noted.

Chelsea Clinton is rumored to have said that she would rather work at Bryant’s than at her Wall Street job. And the bar has a near perfect Yelp.com score – not exactly a scientific survey, but it does suggest some serious admiration going on.

Dye says that Bryant’s relies on a different marketing technique than most bars and restaurants. It focuses on online marketing and word-of-mouth; making it paramount that customers get an authentic experience.

“One of the first months that we were open I had a full bar with some ‘gangstery’ guys, a few priests in full garb, and some of those guys from the motorcycle group, the Outlaws,” Dye says. “And they were all joking and getting along. I was thinking, only at Bryant’s.”

Dye spent some years in Seattle where he worked at a beer-only bar, until local laws changed and allowed liquors and mixed drinks of all kinds. This was unchartered territory.

“We didn’t have a manual, so we just kind of experimented,” Dye said. “Nobody was there telling you what to do; you didn’t have to read a book or guide, you just had to taste it.” 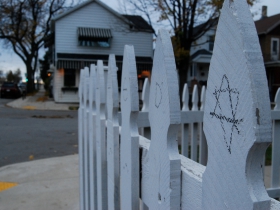 No one will confuse 9th and Lapham with Brady Street or North Avenue. It’s a south side residential neighborhood, not an imbibing scene.

According to the City of Milwaukee, over 70 percent of the near south side neighborhood is Hispanic, and about 65 percent of the families living in the area have children. There are few parks – just eight – to balance 82 tavern licenses. And, despite the elevated rate of locked vehicle crime, this is a pretty typical Milwaukee neighborhood.

One night’s patrons included a gentleman who had left a teaching job at Notre Dame to come back home and care for his father struggling through Chemotherapy. Marc Rodriguez, who grew up three blocks from Bryant’s, is a veritable history teacher for the neighborhood.

“It’s like watching one of those time lapses,” Rodriguez says. “Everything just goes on outside and this place hasn’t change in maybe 40 years. That’s its biggest appeal.”

The undisturbed décor, harmonizing bartenders, and nearly pitch-black lighting could comfort any man – even one who is watching his Dad go through radiation therapy.

Rodriguez talks about how the languages he was so familiar hearing in his neighborhood, Ukrainian and Polish, have been replaced by Spanish. Yet the neighborhood still retains much of that history.

“Those (Ukrainian and Polish) immigrants were craftsmen in their home countries, and they put their hearts into these homes,” Rodriguez says. “The custom wood work and built-ins…these are some of the best built homes anywhere. Redwood archways, are you kidding me?”

Bryant Sharp opened Bryant’s beer hall in 1936 and after two years – the same amount of time it took Dye to make his own life-changing decision – Sharp decided to serve only cocktails. 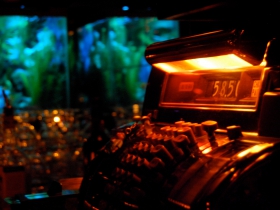 This began a domino effect.

The jukebox was replaced with a record player and classical music. Wood floors were carpeted, and walls were papered. Sweaty became swanky. And of course, windows were shaded, heavily.

Bryant Sharp made a mean cocktail and was one of the city’s first and foremost cocktail aficionados. When he passed away in the early 60’s, his employee, Pat Malmberg, purchased the lounge and transformed the upstairs apartment into what is now the private and plush Velvet Lounge.

Most of the current décor can be traced back to the aftermath of the 1971 fire that almost destroyed the building and closed Bryant’s forever. Undeterred, Malmberg decided to improve the lounge and create an experience that Milwaukeeans had never before known. The bar and the booths were custom built. He restored Bryant’s iconic cash register. He upgraded the McIntosh sound system with the newest model. Then he plated it in gold. People lined the streets of south 9th just to get in. 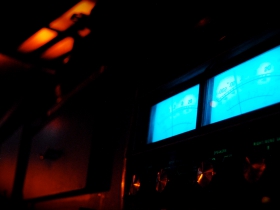 Dye, who is interested in historic preservation and architecture, knows why Bryant’s works the way it does.

“The whole culture around here is about preserving things,” Dye says. “We told contractors that they couldn’t knock down any walls or change any wallpaper…it’s the soul of this place.”

Bryant’s is not just Milwaukee’s oldest cocktail lounge that almost burned down and almost couldn’t find a buyer. It is living history in a neighborhood that is often overlooked residing in a city that is often under-appreciated.

Dye still recalls his reaction when he first encountered Bryant’s: “I was just amazed. I think it’s just something with this city that sometimes people don’t recognize what they have.”