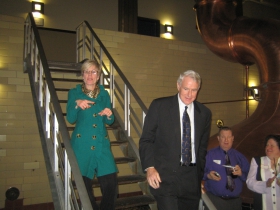 The copper-kettled atrium of The Brewhouse Inn & Suites, 1215 N. 10th St., was the site of the 60th birthday party for Mayor Tom Barrett Thursday, December 19th.

“Well, it’s better than calling an ambulance,” he said of holding his party 11 days after the solemn anniversary, which took place on December 8th while the mayor was flat on his back in a hospital, suffering from exhaustion after a grueling run at the Pettit National Ice Center at State Fair Park in West Allis..

“So why do this event now?” he asked of the event that had been planned months before for Mayor’s Club members.

“It’s because it is important for me to let people know I am still breathing.

“What I found out last week is that I thought I was 25 years old.

“And I was thinking, ‘here I am in a West Allis ambulance and I am leaving State Fair again,'” he added, referring to a 2009 attack on the mayor that also landed him in the hospital with very serious injury.

The mayor did a shout-out to the elected officials in the house, paying particular attention to Common Council President Willie Hines whom the mayor singled out for their excellent working relationship over the past 10 years in a heartfelt speech. The mayor also recognized Ald. Terry Witkowski, Sen. Tim Carpenter and Rep. Gwen Moore, who looked resplendent in a radiant red suit and wild white glasses. 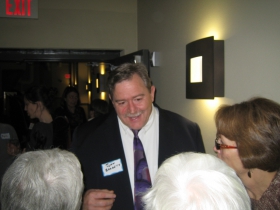 Acclaimed by his brother the mayor as the handsomest guy in Milwaukee politics, County Clerk of Courts John Barrett acknowledges the compliments of those in his presence. Photo by Michael Horne.

However, he reserved his highest public-servant compliment for the person he considered the “best looking guy in Milwaukee politics, the Clerk of Courts John Barrett.”

That tribute to his brother earned the mayor the biggest laughs of the evening, with John Barrett’s being the largest.

The mayor explained that he wanted to hold the event in the restored 1877 [addition 1892] brew house of the Pabst Brewery because it represented a significant moment in his administration.

“What a great renovation,” he said, speaking from an open staircase in the hotel atrium as guests munched on birthday cupcakes from Classy Girl Cupcakes, 825 N. Jefferson St.

“Cities are places where things are always reinvented,” he said, channeling his inner Norquist.

“Six years ago this place was deserted. Even the bad guys were afraid to go here. It was desolated. But as they say, ‘a mother is only as happy as her unhappiest child,'” which the mayor took to mean that it is his responsibility to see that development extends to all neighborhoods and constituencies of the community.

We must deal with questions of “how to create opportunities, to celebrate successes, yet not to ignore challenges,” he said. 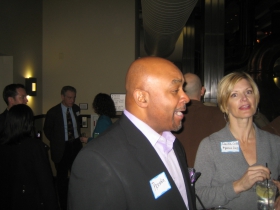 Preston Cole worked his way down from the top in the City Forestry department to Department of Public Works Director of Operations. He is shown with his wife, Laura Lutter Cole. Photo by Michael Horne.

Among the attendees were such notables as Preston Cole, the Department of Public Works director of operations, with his wife Laura Lutter Cole, Health Commissioner Bevan Baker, Graeme Zielinski, Jane Foley, civil engineer Mike Payant and others including Paul Vornholt, the operations and trade director of the city-owned Port of Milwaukee, Kris Martinsek, late of the Board of Harbor Commissioners and the mayor’s new appointment to the MMSD board, a paying job. Atty. Craig Mastantuono was there, ensuring that the harbor commissioners had a representative on the floor.

The bar was cash, and included a representative selection of Milwaukee-made Great Lakes Distillery products, and the obligatory Pabst Blue Ribbon Beer.

The only other beer available was Spotted Cow (like Pabst, brewed with corn adjuncts), brewed in New Glarus. What were they thinking?

Jonathan Brostoff, who recently declared his candidacy to replace Attorney General candidate Jon Richards in the assembly, made an appearance and got the endorsement of Gene Gilbert and his wife Inez Gilbert. One of his potential rivals, County Board Chair Marina Dimitrijevic, made an early exit to attend a fundraiser on her behalf. 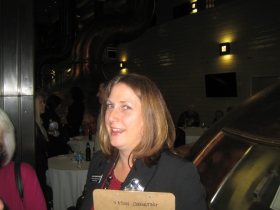 Laura Gramling Perez and her clipboard off in search of the maximum 2,000 signatures permitted to be submitted by a judicial candidate in the County of Milwaukee. But 1,000 will get her on the ballot if collected by the end of the month. Photo by Michael Horne.

Atty. and retired judge James A. Gramling, Jr. was there, as was his daughter, clipboard-toting judicial candidate Laura Gramling Perez. Father Gramling says he will be collecting signatures on her behalf in the lobby of City Hall during tax week. Fellow judicial hopeful Janet Protasiewicz got help in the nomination game from her father Jim, who actively solicited signatures on her behalf from the guests. The mayor introduced Susan Happ, District Attorney of Jefferson County and yet another candidate for Attorney General.

Those traffic cops on I-94 sure bring in a lot of revenue, I suggested. Her eyes lit up as if I had handed her a campaign contribution for the maximum amount.

“Yes.” Ms. Happ added, adding that her office is very reasonable and will gladly reduce charges for those complaisant drivers kind enough to plead guilty to their lead-footedness.

Barrett on Being Mayor

The Mayor’s Club holds four annual events including the December birthday party, the “Spring Symposium,” the “Mayor’s Club at the Zoo,” and the coveted “Restaurant Roundtable” to raise funds to support his candidacy. Since the mayor will not face re-election until spring, 2016 he has plenty of time to make up his mind to run again or to retire, but from the appearances of things, and from the funds raised, it looks like he would like to stick around for another term. Even if he bails out in 2016, he will have been only the 8th mayor in a century, and that’s including Interim Mayor Marvin Pratt, who only served for 3 months in 2004. [Chicago has had 15 mayors in that time, including Daley father and son, who served 42 years between them.] 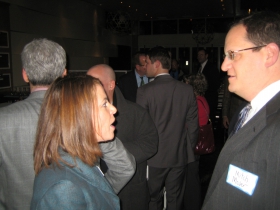 The finest food of the current election season was served Tuesday, December 17th, to attendees of a fundraiser for Judge Rebecca Dallet held at Unami Moto, 718 N. Milwaukee St.

“Did you try the sushi?” asked retired MPD union official Bill Ward. “This is excellent. I’ve never had sushi before.  This is good,” he said, pointing to the frequently changed array of tuna, salmon, avocado, tempura and other delights served free-of-charge to the attendees, while a cash bar poured mostly wine. (This is a judicial campaign after all, not a College Democrats Keg Party.]

Among supporters of the first-term judge, who is unopposed at this time were colleagues Jeff Wagner, Bill Pocan, Daniel Noonan and Thomas McAdams.

Other attendees included Jane Foley, Mitch Moser, seen in a photo with the candidate, Rob Bauman (not the alderman!), John Birdsall, Mike Maistleman who is a busy boy these days and Marty Gagne.

Dallet was joined by her husband Brad, and a daughter, Ellie, the middle one of her honor’s three girls.

So how many robes does Rebecca Dallet own? “Just one robe only,” the diminutive jurist responded. “But I might get a new one if I am re-elected. They are tough for me to find because I am so short.”

Lakefront Brewery president Russ Klisch tells Plenty of Horne that he figures he will end the year 2013 with production of “39,500 to 40,000 barrels.”

This is up 19 percent from last year’s 33,369 barrels, itself a huge increase from 23,576 barrels produced in 2011. Part of the sales increase is due to his gluten-free New Grist beer, now available in 35 states and the District of Columbia, including RFD restaurant in Chinatown, where it was the only Wisconsin beer of a hundred on the menu, on December 13th (with the notable exception of Miller Lite.]

Correction: Preston Cole’s title was listed as chief, his correct title is director of operations.