Just up from the bike path, the former tavern and restaurant is now one of the greenest residential houses in town. 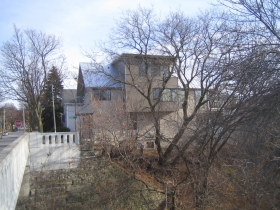 The BikePath Building is visible from the Oak Leaf Trail.

This 1890 corner building tucked away in a quiet enclave west of N. Oakland Avenue was considerably redesigned and re-engineered in 2012 for owner Sara Beth Wilson by Nick Carnahan of Vetter Denk architects.

The remodeling included the nation’s first-ever wastewater permit requiring the installation of “green infrastructure” to collect and absorb rainfall, earning the owner a $5 per square foot grant from the Milwaukee Metropolitan Sewerage District for her 500 square foot roof garden. It is the first in the city to have a multiple-stage collecting and irrigation system. The roof can hold up to 1,500 gallons of rain — good enough for a 5 inch storm event. Any excess drains to a swale on the west end of the property, immediately adjacent to the Oak Leaf Bike Trail.

Small measures like this have made the sewerage district one of the most innovative in the nation in keeping stormwater out of the sewers.

With an original address of 333 Belleview, this structure was built as a residence for August Buth at a cost of $1,600. By 1903 the building, now owned by Miller Brewing Company, was converted into a tavern with upstairs apartment, the configuration it was to enjoy for over a century. Miller added a small cottage at the south end of the property, a wedge-shaped lot of 3,690 square feet that is only 8.58 feet wide at its southernmost point. Just to the west, across the Belleview Bridge, certainly one of our city’s least busy spans, was a mushroom growing factory.

The cottage eventually disappeared, and in 1924 owner Leo J. Rick installed a garage in its place at a cost of $500.

Ten years later, with the repeal of prohibition already a year old, Rick applied for a tavern license for his establishment. This was merely a formality, since Rick answered the question, “what has been former occupancy?” with the single word, “tavern.”

Rick put up asbestos brick siding in 1936, covering the wood original of this simple frame structure.

The years rolled by and Charles Ebert operated a tap there in 1954. Once again a Miller Brewing Company sign appeared on the building, replaced by a newer Miller sign in 1956.

The building came into the hands of Frank Vitucci in 1969, and was granted a tavern license as a “legal non-conforming use” of the property.

On August 31st, 1970, Vitucci rented the place downstairs to a young tavern operator, while occupying the apartment upstairs.

The new operator, Anthony Frank DePalma, called his place the Y-NOT. In 1976 the inspector noted that DePalma had two locations. [The Y-NOT II is still in business at 706 E. Lyon St., with DePalma as sole proprietor.] The assessor figured DePalma’s rent at $450 per month for the tavern, and calculated that his sales were $136,820 in that year.

Newhall Street and neighboring Bartlett Street were hopping places in those days, with many bars; today, nearly every vestige of their tavern history has been effaced, with the most notable exception being Champion’s Pub, 2417 N. Bartlett St. A similar tavern zone operated across the river on E. Wright Street, with virtually no trace remaining today.

By 1981 DePalma was out of the building, which then became Christino’s Corner House, with an Old Style beer sign outside. Also, that year the city ordered Vitucci to tear down the garage. He complied with that order in 1982. In 1983 the building was bought by Gerald E. Eschenberg, who sold it to Don Sivilotti in 1984, when the tavern became known as “Mixers”. The upstairs apartment was occupied, rent-free, by the bartender, itself a disappearing Milwaukee tavern perk.

In 1990 the building was bought for $80,000 and was being converted to a two-story restaurant. The bartender was out on the street after the tavern lost its liquor license. 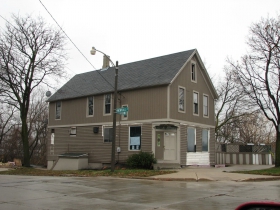 The building prior to its conversion into the BikePath Building. Photo form the City of Milwaukee.

Attempts by new operators to secure a liquor license for the property were unsuccessful. The neighborhood had considerably calmed down from its earlier alcohol-fueled working class rowdiness and settled into a sedate area of property owners and students with no place nearby to go and drink.

In 2011 Wilson, the current owner, paid $140,000 for the property and commenced on her considerable remodeling.

She claims for herself an upstairs dwelling of 1,740 square feet. The ground floor of the structure, now named The Bike Path Building after its neighboring trail, is available for rent by a commercial tenant. A bike rack is right outside the front door.

Texas native Sara Beth Wilson is a principal in Mayes Wilson Associates, an advisor to non-profit organizations like the nearby River Revitalization Foundation. She divides her time between Milwaukee and her family’s property holdings in the Lone Star State. She has worked with the Nature Conservancy and the Land Trust Institute, and enjoys birding and biking in her urban Milwaukee neighborhood. 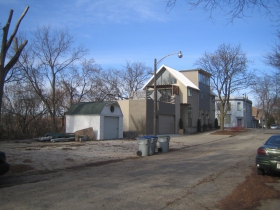 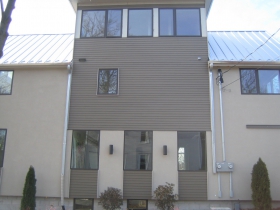 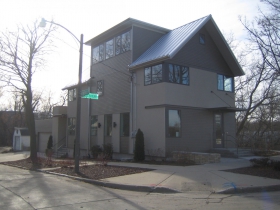 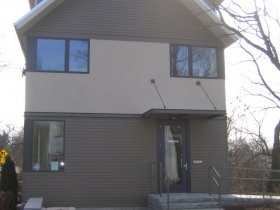 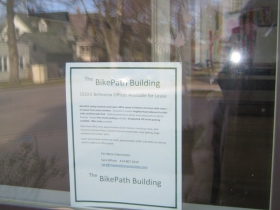 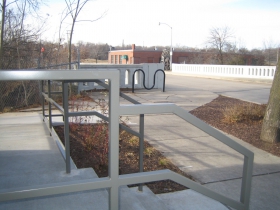