Why Walker’s Job Strategy Has Failed

He’s followed a much-touted strategy used by successful companies. Why hasn’t it worked?

In his campaign to become Wisconsin’s governor, Scott Walker famously promised the creation of 250,000 private sector jobs by the end of his term. It is no secret that Wisconsin is on track to miss this target by a long shot. As the chart below shows, forecasting models based on current trends predict an increase of approximately 120,000 new private sector jobs by the start of 2015, about half the number promised. The blue line at the bottom shows how jobs have grown under Walker and (where the line gets very straight) how jobs are likely to grow over the last 18 months of his term.

The green line at the top shows job growth during this same period in the average state. It reveals that since Walker took office, Wisconsin’s rate of job creation has lagged well behind the nation. If Wisconsin had enjoyed that level of job growth, it would be on track to add around 190,000 private sector jobs over the four years of Walker’s term as governor, still short, but much closer to the rate of growth he promised.

The decision to count only private sector jobs actually serves to make Wisconsin’s job creation record look better than if all jobs were counted in the goal. Local government jobs have declined in Wisconsin even as they have increased in other states.

Wisconsin’s divergence can be seen by comparing its job growth with that of contiguous states. Wisconsin is behind Michigan, Minnesota and Iowa and competes with Illinois for last place. 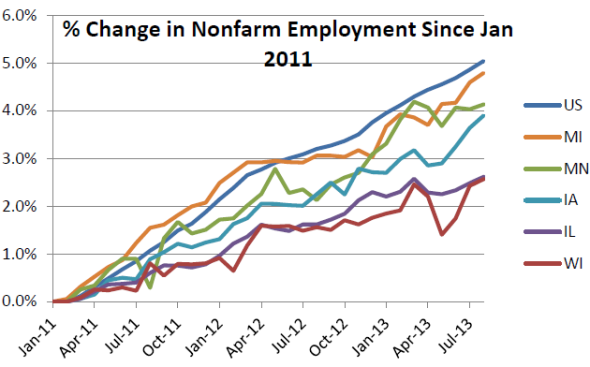 Percent change in Nonfarm Employment Since 2011

Another sign of weakness in the Wisconsin job market is the behavior of the unemployment rate. As the Walker era started Wisconsin’s unemployment rate was well below the national average, but the gap has been shrinking. By contrast, Minnesota’s advantage over Wisconsin has been growing. 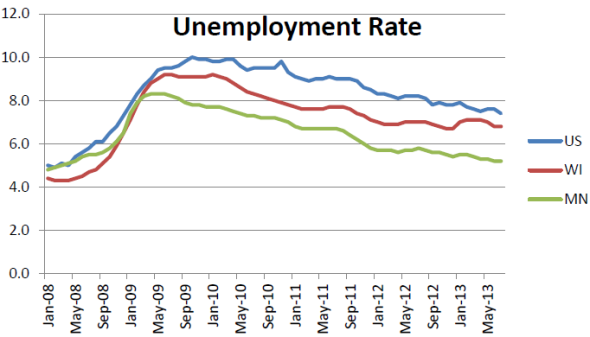 To achieve the promised 250,000 jobs, Wisconsin would have to add jobs at the rate of over 10,000 per month during the remaining months of the governor’s term. This is four times the rate up to now. But there is no evidence the growth has picked up in recent months.

These results raise the question of why candidate Walker was so confident that Governor Walker could create 250,000 new private sector jobs. Was this simply campaign rhetoric designed to win the election? To the contrary, the evidence suggests Walker genuinely believed that he had been given a model that would allow him to fulfill that promise.

This model promises healthy job growth if a state adopts certain government policies. Variations of this model are widely pushed by a small army of organizations on the right side of the spectrum, including think tanks, publications, trade associations, and lobbyists. It promises job growth through taxes that are low, a flat, limited government, and low labor costs. Among the many organizations pushing this model are the American Legislative Exchange Council (often called ALEC) and CEO magazine.

The model is spelled out in rich detail in a report entitled Rich States, Poor States, published annually by ALEC. It lists 15 “policy areas” (actually metrics) used to rate the states. These metrics, shown in the box below, help identify the factors most important to the model. 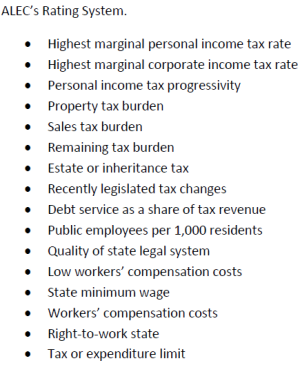 In the business world a firm that builds its strategy around aggressively reducing costs and prices is described as following a “cost leadership” strategy. Businesses successfully following this strategy relentlessly drive down costs and prices. Well-known examples are Wal-Mart and McDonalds. In essence, ALEC and its sister organizations are advocating that states follow the example of companies like this.

While easy to describe, a cost-leadership strategy is often hard to implement effectively. The business landscape is littered with firms who tried and failed at a cost leadership strategy, when unable to lower their costs as much as competitors. Even firms successfully following this strategy find profits under constant pressure from competitors following the same strategy.

Do states adopting a cost-leadership strategy enjoy greater economic success? Many of the organizations advocating for this model also publish state business climate ratings based on how well states conform to it. These ratings allow one to test whether coherence to the model results in higher job growth and lower unemployment. One of these ratings, from Chief Executive magazine based on a survey of its subscribers, offers a good measure of which states are judged to follow the cost-leadership mode. As touted on the governor’s web site, Wisconsin has advanced from 41st to 17th during the Walker years.

Unemployment vs CEO Rankings for all 50 States.

And next is a comparison with recent job growth, which again shows higher-ranked states (toward the right) are just as likely to have low job growth as lower ranked states. 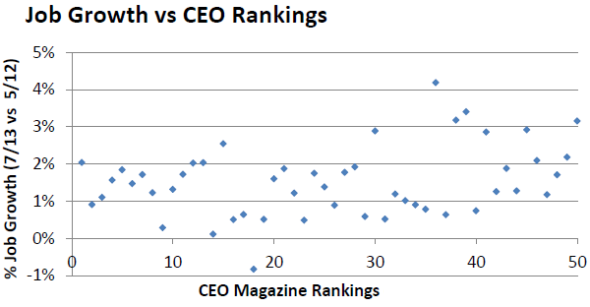 Job Growth vs CEO Rankings for all 50 States

Despite the presence of several highly-rated energy producing states (unsurprisingly, the state with the highest job growth is North Dakota in the midst of an energy boom), the relationship between job growth and rankings is not statistically significant. Using rankings from other like-minded organizations and job growth over different periods gives similar results: the connection between success in the ratings and success in job creation is weak at best. Thus it appears a cost leadership strategy gives states little or no advantage in creating jobs.

A state adopting a cost-leadership strategy is most likely to enjoy success in markets with few competitors; if for example, it is part of a regional market where only one or two states are using this strategy.

Advocates of a cost-leadership strategy often single out Texas as successfully using that strategy, enjoying strong job growth combined with low taxes and regulation.  The US Chamber of Commerce, an advocate of a cost leadership strategy, rates Texas as 3rd in short-term job creation, compared to 50th for Wisconsin. But Texas also underlines the social costs of a cost leadership model. Its 2011 poverty rate was 17.4% compared to 13.1% in Wisconsin and one quarter of its residents had no health insurance compared to 10% in Wisconsin.

An organization called the Information Technology and Innovation Foundation (ITIF) publishes a rating of the states, called the New Economy Index, listing “which states are thriving in innovation in the new economy.” A number of states rated low by CEO magazine are rated high by ITIF. For example, CEO rates California and New York at the very bottom, while ITIF rate them as numbers 4 and 11. Massachusetts, ITIF’s number 1, comes in as number 47 on CEO’s list. Only Virginia lands in the top ten on both lists. There is a statistically significant negative relationship between the two lists.

The model’s bias against progressive tax rates could also work against increasing consumer demand, since low-income people are much more likely to spend any extra income than those higher up. In a recession a strategy that keeps the top state income tax marginal rate, while expanding the earned income tax credit, is likely to be more effective in stimulating spending.

Without the analysis of more data, one cannot say for sure how much these and similar decisions explain the weakness of Wisconsin’s recovery, but they certainly contributed to it and undercut the jobs promise. That the Walker administration nevertheless adopted these counter-productive measures is evidence of the powerful hold the ideological underpinnings of the cost leadership model had over the governor and the people advising him.

In the upcoming gubernatorial election both the direction and the results of the Walker economic policy will be well defined. Much less clear is how a Democratic policy would differ. The burden will be on the Democratic candidate to advance a credible alternative.

5 thoughts on “Why Walker’s Job Strategy Has Failed”