In Defense of County Bus System

MTS has done a great job of running county transit and shouldn’t be replaced. 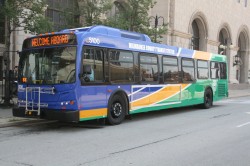 People complain about transit service: the bus is late, or early, the long waits, the fare, that one driver, the snowed-in bus stops.

While I make my own complaints known, I am fond of the bus. That fare transports me without parking. Reading or daydreaming I enjoy the ride but notice what is going on. Sometimes I call in my comments, pestering the managers, questioning my County Supervisor, or quizzing drivers.

One day in 2010 I received an invitation to put my complaining to work on the Transit Services Advisory Committee. A dozen riders and a driver, we advise the county and the bus system’s not-for-profit managers, Milwaukee Transport Services (MTS).

Supervisor Michael Mayo congenially picked me as chair, Bill Sell, a dreamer, not a planner. I dream of a Milwaukee rising on a modern transit system, express buses, streetcar, light rail, bicycles and high speed rail.

I am the most fortunate volunteer in Milwaukee to be working with this spectacular team of talent and wisdom, bound together because we believe that transit is essential.

Given our housing segregation and concentration of affordable housing in the city, the solution to distant work is transportation. If transportation fails, the region fails. High urban unemployment accompanied by bus route cuts is no trolley to success.

First off, our committee worked. We collected bus rider advice dating back to 2007. In 2011 we published a 40 page booklet of rider advice to the county and the transit system.

Supposedly, all elected officials would read everything we wrote, pass resolutions, and appropriate money to fix things. And we could move on to attracting new riders with newspapers and coffee on morning buses.

Stop right there. Did I say “appropriate money”? Actually you voters said it first.

Two years before our appointment, in 2008, the County Board led the fight for a referendum on dedicated funding. A small sales tax would remove buses and parks from your property tax and build a dedicated fund, which is how all but two cities in America fund transit – yes, Milwaukee is one of those two. You voters said Yes to dedicated funding, but state politicians wilted.

Governor Jim Doyle vetoed dedicated funding of transit; Governor Scott Walker tried to exclude transit from transportation funds, and borrowed $1 billion for new highways while people were driving less and using transit more. Both Democrat and Republican legislators have chuckled their way out of our 2008 referendum. Ask them about our referendum, and watch their face.

So when you blame MTS for your bus woes, consider that the missing bus shelter, the 40 minute wait, the high fares, and the disappearance of routes is only about money, not management.

The current managers, MTS, should get the Milwaukee County transit contract given its competent 38-year performance.

MTS wins praise for performance, safety, and efficiency from the leading transit monitors: the Federal Transit Administration, Lancer Insurance (an industry leader), the American Public Transit Association, and our own Wisconsin Department of Transportation. Budget records show MTS has already saved the County about $17 million with the New Freedom program and is under budget 95 percent of the time. And these savings continue every year.

Does MTS listen to its critics? Well we know MTS managers read our 2011 advice; they were the only responders to honor our effort. MTS’ detailed responses were carried to our meeting by the Chief Operating Officer of MTS. Three or four managers at a time attend TSAC meetings. They listen better than any elected official I have ever known.

Does the media listen? Sometimes, but they will limp along as if this struggle for local control is academic. When did you ever read in the media that 99.9914 percent of every passenger trip is without incident? That is safety. No transit contract bidder will promise that near perfection. But MTS provides it.

Where did you first read that MTS returned $5 million to the County in 2012? Here, in this column?

If County Executive Chris Abele gets his way, MTS would fade away. MV Transportation would annually sweep five or six figure county dollars off to Texas, while your property taxes will continue to be tapped for parks and transit – and Texas profits.

My question, gentle reader, would you support a proven performer or a busload of promises from Texas? Local or “foreign” control? Performance or promises? What will it be, Milwaukee?

6 thoughts on “Op-Ed: In Defense of County Bus System”