Will Paul Ryan Be Romney Redux?

He’s a favorite of Republicans, but Democrats may be secretly cheering for him as well. 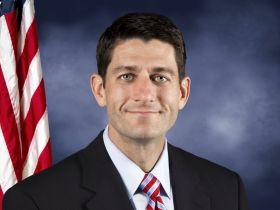 Wisconsin congressman Paul Ryan has planned upcoming trips to Iowa and New Hampshire in what looks like an early effort to campaign for president in 2016. And why not? A recent CNN poll of Republicans and independents found 17 percent favored Chris Christie as the Republican choice in 2016, but Ryan was a close second, at 16 percent.

Ryan is certainly impressive: good looking, articulate, physically fit and cool under fire. And, of course, far more conservative than Christie and thus more likely to win in Republican primaries. But he might be as weak a general election candidate as Mitt Romney.

Good campaigns tell a good story. Romney’s narrative was problematic. The fact that he was a fabulously wealthy guy calling for tax cuts he would disproportionately benefit from, while favoring reductions in Medicare and the safety net for average folks, made him a difficult candidate to sell.

But Ryan is a far more aggressive proponent of the same things. (Indeed, Romney’s campaign borrowed heavily from Ryan.) And last week, Ryan again showed his true colors, voting with 217 other House Republicans to cut food stamp benefits or the Supplemental Nutrition Assistance Program (SNAP). The measure barely passed (it was opposed by every Democrat and 15 Republicans), and is sure to be rejected by the Senate.

In the midst of a still-bad economy with high unemployment, when some have been looking for jobs for years, this law would cut off SNAP benefits after just three months. According to the Congressional Budget Office, it would remove nearly four million people from SNAP in its first year and about three million a year after that.

Ryan called food stamps an example of turning the safety net into “a hammock that lulls able-bodied people to lives of dependency and complacency.” But the average food stamp benefits are just over $1,600 yearly or $4.45 a day. And most of the SNAP beneficiaries are children, the elderly or the disabled, with the remainder mostly adults with children. The law would be a disaster for cities like Milwaukee, where almost 30 percent of people live in poverty, and food stamps are a lifeline.

Ryan is not as rich as Romney, but his net worth is about $5 million, which probably puts the congressman among the top 2 percent of Americans. And unlike Romney, who famously grew his wealth as a venture capitalist, and who could claim he knew how to grow a business, Ryan’s riches come from marrying a wealthy woman.  That could be as tough a story to sell as Romney’s.

Yes, Romney often seemed inauthentic and gaffe-prone. But Ryan, in a memorable moment,  was caught drinking bottles of $350 wine at a swanky DC restaurant in 2011, offering a striking contradiction to his regular guy image. And Ryan’s speech at the Republican convention was assailed for the many whoopers it included. As a Fox commentator, no less, phrased it, the speech “was an apparent attempt to set the world record for the greatest number of blatant lies and misrepresentations slipped into a single political speech.”

As I’ve written before, there is little evidence Ryan helped the Romney ticket — even in Wisconsin. Yet Wisconsin Republicans prefer him for president to Scott Walker, a recent poll showed. And as a congressman, Ryan will likely have more free time to campaign than a governor busy running a state and trying to get reelected.

It may be difficult for Walker, coming from the same state, to get any traction if Ryan continues to be seen as one of the front runners.

Yet Walker’s campaign story hold ups far better than Ryan’s. When Walker calls for cuts in government benefits, he does so as an average taxpayer who lives on the wages he makes and owns a modest home in Wauwatosa. Walker is just as conservative as Ryan, and would have great appeal for conservatives, but he has more ability to move to the center as a presidential candidate (as he did in winning the 2010 race for governor and the 2012 recall race). Ryan has boxed himself in as the savant of GOP cost-cutting, with his repeated plans to slash the safety net. And we’ve already seen how that approach works in a presidential race.

The Purity of Tim Cullen

Groucho Marx had one of the great lines about movie actress Doris Day: “I’ve been around so long I can remember Doris Day before she was a virgin.”

I was reminded of that line when reading Democratic state Sen. Tim Cullen’s comments while announcing his retirement. He thundered a condemnation of today’s politics:  “I have concluded that we cannot look to Washington or Madison to focus on the needs of the powerless. Washington and Madison care all too much about the moneyed and powerful.”

Old timers, however, will remember there was a time when Cullen, as majority leader of the senate from 1983 -1987, was considered the “bagman” who took care of campaign contributions flowing from the moneyed and the powerful, particularly lobbyists.

In a September 1994 story for Milwaukee Magazine on the decline of Wisconsin’s Democratic Party, I wrote this: “Democrats traced the corruption of the state Senate to the reign of Tim Cullen, majority leader of the senate from 1983-’87. ‘It was a the School of Caligula,” one ranking Dem said. “He turned the state budget process into an auction.”

Said another prominent Dem: “He turned the Senate into something that was about process, raising money and special interests. By the time (state Sen. David) Helbach took over, he couldn’t turn it around.”

Cullen’s name came up during the lobbying scandal of 1988 that centered around lobbyist Gary Goyke and resulted in the successful prosecution of several legislators. There was evidence that one of the businesses Goyke lobbied for had provided a free car rental for Cullen. Lobbyists complained that Goyke built his business through his association with Cullen, who in turn put the blame on Goyke, complaining “he peddled my name.”

In his second turn as a legislator, Cullen went the Doris Day route and became newly virginal. Whatever the historic contradiction, he stood out as a proponent of compromise in an age of nasty partisanship.

As one reader noted to me, my story regarding the affair between former state health Secretary Dennis Smith and his chief legal counsel Mary Spear was incomplete. I described the cozy background to her hiring by Smith: she was a friend he’d known since they were children, she had no job at the time, and it looks like no one else was considered for the job. Smith could not have done that under the old state law, because the department attorney positions at the state were civil service appointments. However,  Gov. Walker pushed the legislature to make the attorney positions political appointees. If he hadn’t, Walker would still have Dennis Smith serving as health secretary.

9 thoughts on “Murphy’s Law: Will Paul Ryan Be Romney Redux?”