Actually it's often a good thing, and city policies should take that into consideration. 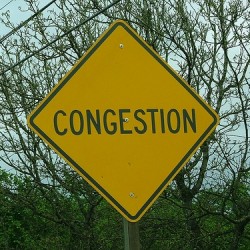 No one likes being stuck in traffic. That’s why people complain about congestion. Yet it’s just as true that popular destinations tend to be crowded. Fifth Avenue in New York, Market Street in San Francisco, Chicago’s Michigan Avenue, and Rodeo Drive in Beverly Hills are all congested, but people keep coming back to shop or hang out. Maybe we should view congestion, in the urban context at least, as a symptom of success.

If people enjoy crowded places, it seems a bit strange that federal and state governments continue to wage a single-minded and expensive war against traffic congestion. Despite many hundreds of billions dollars spent on increasing the capacity of our roads, they’ve not yet won, thank God. After all, when the congestion warriors have won, the results aren’t often pretty. Detroit, for example, has lots of expressways and widened streets and suffers from very little congestion. It also has lost 2/3 of its population and is in the hands of a bankruptcy trustee.

After all, congestion is a bit like cholesterol – if you don’t have any, you die. Like cholesterol, traffic exists as a “good kind” and a “bad kind.” Congestion measurements should be divided between through-traffic and traffic that includes local origins or destinations, the latter being the “good kind.” Travelers who bring commerce to a city add more value than those just driving through, and any thorough assessment of congestion needs to be balanced with other factors such as retail sales, real estate value, and pedestrian volume.

Fighting traffic congestion by merely adding more road capacity is what urban thinker Lewis Mumford, in his book “The City and the Highway,” called a “monochromatic” transportation system. In his critique of the Texas Transportation Institute’s “2010 Urban Mobility Report,” University of Connecticut engineering professor and CNU board member Norman Garrick wrote that we “lost sight of the fact that a transportation system affects almost all aspects of daily life and that its value should not be judged purely on the basis of how well it affords the easy movement of vehicles.” In doing so, we fail to recognize the way traditional streets shape successful, self-reliant, and stimulating places.

Early in my time as mayor of Milwaukee, my Public Works director and his staff of traffic engineers came to me with a $58 million proposal for adding right turn lanes to “congested” intersections. The plan involved significant property demolition. My response was to ask if they planned on drawing their pensions after retirement. They looked at me strangely, and then answered yes. I replied, “Then why do you want to destroy the tax base that supports your pension?”

From that day forward, they understood the necessity of balancing their desire for faster speed with the fact that people need street corridors not only to travel but also to shop and socialize. Attempts to accommodate through-traffic by widening streets can destroy the surrounding value of a neighborhood. When the property values or retail sales are part of the cost–benefit calculation, road-widening starts to look like a dubious investment.

New York’s Greenwich Village reaps the financial rewards of its perpetual vehicle congestion. In a recent analysis, Eric Dumbaugh of Florida Atlantic University reported that each 10 percent increase in per capita traffic delay was associated with a 3.4 percent increase in the per capita gross domestic product of a region.

This doesn’t mean that cities should strive for congestion but that they should recognize that traffic is often a sign of dynamism. Moving vehicular traffic is obviously a necessary function, but by making it the only goal, cities lose out on the economic potential created by the crowds of people that bring life to a city.

With governments at all levels short on cash, maybe it’s time to broaden the goals for our streets. It’s time to retire the expressway in an urban context. It should be replaced with a system that examines the performance of street networks, including transit where relevant, and considers economic and social value along with vehicle distribution. It should be a system that measures the value and effectiveness of a city’s street network. If departments of transportation and local governments take a closer look, they may find value in congestion. After all, real estate prices seem to confirm that preference, and shouldn’t our infrastructure reflect that and add value to the place where it is built?

John Norquist runs the Chicago-based Congress for the New Urbanism and previously served as Milwaukee’s mayor from 1988-2004. This column was originally published by StrongTowns.org