Margaret Connolly Flint has a gorgeous Lake Drive home, but why are all the blinds drawn?

In October, 1997, neighbors were amazed when “an otherwise perfectly normal $300,000 home in a pristine neighborhood was being demolished,” wrote Marie Rohde in the Milwaukee Journal.

The month before, Claire Krom, retired to Florida, sold the 3,800 sq. ft. home to his neighbors to the north, Charles Albright Flint and his wife Margaret Connolly Flint, who paid cash. They wanted the neighboring property to enlarge their yard, which would then measure 220 x 150 ft.

Such a move is not entirely unheard of among House Confidential honorees. Baseball Commissioner Bud Selig tore down a neighboring house in Bayside a couple of years ago.

But at least Bud opens his curtains to let in his expanded view. 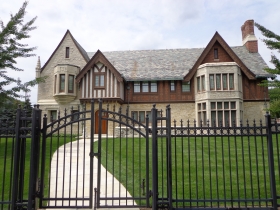 The $200,000 fence that caused the ire of Margaret Connolly Flint surrounds her home where the shades are always drawn.
Taken August 9 2013 by Michael Horne

Not so the Flints. Despite the new yard, impressively landscaped with mature conifers, surrounded by a $200,000 fence and enhanced with a 30 ft. tall, $75,000 fountain, the curtains on the Flint home have never been seen open. Not a single one of them.

Retired Judge David V. Jennings, whose first wife grew up in the house told Rohde, “the drapes are always drawn. I never see anyone there.”

The reporter heard that the home’s interior is in immaculate condition, but added “few have seen it because the Flints are intensely private people.”

Krom, the former owner, told the reporter that “neither he nor his wife had spoken to the Flints, even though they had been neighbors for more than a decade. ‘They are people nobody knows.’”

His probate file lists a visible estate of $21,052,359.20, which is by any account an impressive piece of change to leave behind. Often in the case of those with large fortunes substantial assets like insurance are not included in probate totals, so the Flint fortune may be larger than this sum indicates. His heir was his wife, who has no problem paying her $54,941.95 property tax bill with that kind of loot lying around. [In fact, Mrs. Flint also has an in-town, full-floor getaway on the 32nd floor of the 33-floor, previously profiled Kilbourn Tower, 923 E. Kilbourn Avenue, that is valued at $3,456,700. Let’s hope she opens the windows there.]

The house and its grounds show absolutely no signs of deferred maintenance, and the Flints have kept workers busy on the property, built for candy heir Harry S. Johnston. The Flints re-roofed the place in 1982, and then set about the next year repairing and rebuilding a brick garden wall. In 1983 they also had a new concrete drive turnaround installed. In 1987 they spent $40,000 to remodel 6 baths and one kitchen. In 1997, with the new property at their disposal, the Flints rerouted their driveway, and in the next year they put in that $200,000 fence and $75,000 fountain, which appears to be a genuine mid-Victorian piece. You could bathe a horse in it.

After Mr. Flint’s death, things have slowed on the contractor side, with only a basement dishwasher being installed in 2004, and nothing since.

About Charles A. Flint

Charles Albright Flint is named after his grandfather, Dr. Charles Edgar Albright, who married Schlitz heir Laura Uihlein Albright. Dr. Albright must have been a delight to his father-in-law Henry Uihlen, president of Schlitz brewery, because he became a success in his own right, which was rare among husbands of early 20th century heiresses.

Doc made his money not in medicine, but in insurance, becoming a legendary producer for Northwestern Mutual, which relies heavily on business from wealthy patrician families like Uihleins and Albrights and their pals. For a remarkable 30 years (1905-1935) Albright was the number one producer of NML’s 6,000 nationwide agents. The sale of Lorraine Uihlein Albright’s antiques in 1968 was a national event. Chances are that Flint had his pick of goods pre-sale.

Charles Flint does not appear to have engaged in any active business pursuits. He and his wife are not known to the philanthropic community, as nearly as can be determined. Flint used a 735 N. Water St. address on some business stationary, significantly omitting a suite number. But that building has long held the family offices of the Uihleins, and there is a good chance Flint operated out of them, or at least had his mail forwarded there.

Margaret Connolly, of New York City had already lost both of her parents at the time of her marriage to Charles Flint, who at that time had spent six years in the army. He attended Milwaukee Country Day School, St. John’s Military Academy and Carroll College, from which he apparently did not graduate.

But success in money does not always lead to happiness, it has been said, and the Flint story bears this out in spades. The Flints would consider the Kennedy family to be exceptionally lucky.

Flint’s uncle, Charles Albright, Jr. killed himself on New Year’s eve 1938 by walking in front of a train in Oconomowoc. His aunt, Marion Albright Tallmadge, died in a mysterious 1958 fire that destroyed her 25-room Oconomowoc mansion just six months after a son died in an airplane crash. Police were not amused with the dynamite and 42 machine guns stored in the home, the property of W. David Tallmadge, another son of Marion. Around that time, young Tallmadge was sent to an insane asylum for repeatedly (200 times) molesting a 13-year old girl, so the cops confiscated the munitions. Tallmadge sued unsuccessfully to get them back. Tallmadge is now serving a life sentence in California for the molestation of his own daughter and her friend in the 1990’s.

Charles Flint’s mother, Lorraine Albright Flint, divorced his father, Arthur McGeogh Flint in 1931, shortly after their marriage. She suffered from depression and spent most of her life institutionalized. This left Charles Flint to be raised by his grandmother in her home just across Lake Drive from the Flint home.

Arthur McGeogh Flint was himself the grandson of Peter McGeoch, a Milwaukee speculator whose 1885 attempt to corner the lard market led to an acrimonious lawsuit by Daniel Wells, Jr. In 1895 McGeoch’s wife filed for divorce from the father of her four young children, including Charles Flint’s future mother. McGeogh wrote a will giving his wife $25,000, leaving the rest of his million dollar estate to his children. He then went upstairs and shot himself.

(The McGeoch Building, 322 E. Michigan St. is now owned by David Uihlein, (you can’t escape these people) and will be featured once again in Doors Open Milwaukee.)

So, perhaps the apparent gloom of the darkened interior of the Flint Mansion, where sunlight never peeks, is an appropriate setting for widow Flint’s final days. But wouldn’t it be nice to throw open the windows, let the light in, and admire the beautiful, gurgling fountain in the yard? 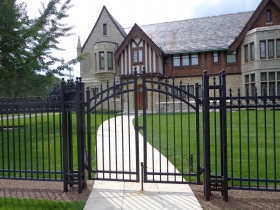 Go away! Nothing for you to see here. Please keep moving. We are not seeing callers.
Taken August 9 2013 by Michael Horne

Margaret Connolly Flint, who is about 84, doesn’t get out much apparently, but she certainly has an eye. She called Shorewood village officials a few years ago when she noted that a neighbor’s gate, when fully opened, encroached some 8 inches into her property. The village officials sent a cease and desist order to the neighbor, and recommended that perhaps a stop could be included in the neighbor’s fencing arrangement to prevent his gate from encroaching on the perfectly landscaped grounds (no flowers, though) of Margaret Connolly Flint.

Mrs. Flint could hop on her bike and take the scenic route to City Hall in 4.77 miles. Or, she could hoof it and shave off quite some distance by taking the city streets 3.95 miles to her destination. Her Kilbourn Tower condo is even closer. 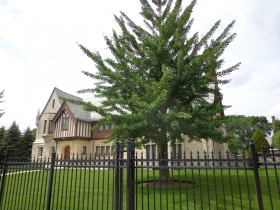 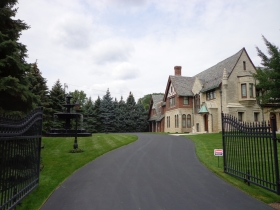 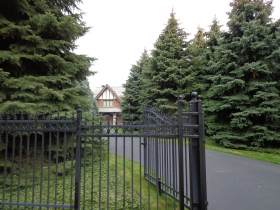 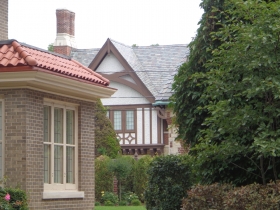 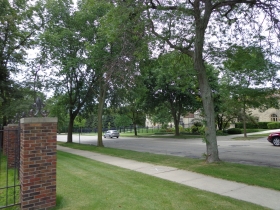