He’s a small business owner, art activist and Christian, not necessarily in that order. 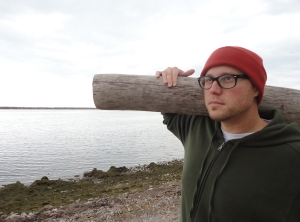 In 1949, when the United States was enjoying its post-WWII economic boom, Arthur Miller wrote “Death of a Salesman,” a play about Willy Loman, a worn out traveling salesman whose career was dying. In Act I, Willy says (speaking about his uncle): “The man knew what he wanted, and went out and got it! Walked into a jungle and comes out, the age of twenty-one, and he’s rich.”

Dan Baker is 37 and not rich. But he and two partners have entered the jungle of Milwaukee’s business world, creating a small company with big dreams called Punch Manufacturing, which provides marketing and design solutions for companies. His office is the kitchen of his modest Walker’s Point home near 11th & National, and he’s very involved in the neighborhood, serving on the board of the nearby Walker’s Point Center for the Arts.

Punch Manufacturing’s website says it is “located in southeast wi.” Some day, Baker hopes to locate Punch in a small bricks and mortar space…some day, when it makes financial sense.

Baker alternates workspaces by sitting in various Alterras, and using a co-working space at Gravity Connect. Perhaps he also sits and sips at The National. No walnut paneling and oriental rugs for him. 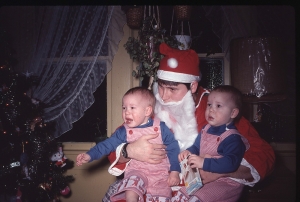 The twins with dad during their first Christmas, 1978.

Daniel Jonathon Baker took his time getting born on August 22, 1976. He was 11 minutes late, the second of twin boys born to shocked parents who weren’t expecting doubles. The surprise took place at Burlington Memorial Hospital in Elkhorn, Wisconsin, not far from Genoa City, Wisconsin, where his folks have lived for most of their lives. His paternal grandfather has been a pastor for over 60 years, and his great-grandfather before him, was also a pastor. Baker’s father, for two decades, has kept the faith as an ordained minister, albeit without a church of his own. Is it really necessary to have bricks and mortar to spread your Christian beliefs? Frankly, “gathering by the river,” has, virtually speaking, never been easier.

Dan’s pastor dad speaks at conferences, camps and special events and often uses props to illustrate his sermons — puppets and elaborate costumes, even magic tricks. But his full time career is with WE Energies where he is a Facilities Engineer. Baker’s mother recently retired from being a lunch lady at the Middle School in Genoa City. She still plays the piano for weekly church services.

And the twin brother, Steev, who beat Baker to the birthing punch by 11 minutes? He’s the director of the Kewaskum Public Library. This was a family that encouraged creative expression. Dan was drawn to art and creative writing at Badger High School in Lake Geneva (both his parents also attended the school) and then discovered movie-making with early video editing equipment. In his Junior year, computers were sophisticated enough to create graphics, so he threw himself into editing software and page layout and the basics of programming. Though he created digital artwork, it was mainly a hobby that extended into his college years.

He also played football for one year in high school, despite never having watched a game in this life. “My family was NOT a sports family,” he says. “At our gatherings, the TV stayed silent; you were more likely to hear the rustle of Bibles, and people debating Theology.” He graduated from Badger High School in 1994, with honors, but, he says, no plans.

So Baker decided to continue the family legacy, and headed to Grand Rapids, Michigan to attend Grace Bible College. He stayed for two years, studying Theology and Psychology, but graphic design was never far from his mind, because he worked as a graphic designer in the college’s Admissions department. Eventually student loan debt caught up with him and he moved back to Genoa City. His first real job as a graphic designer and digital photo editor was with Southern Lakes Media in Burlington, Wisconsin.

In 1998 he married Harmonie, his college sweetheart. The two moved to Oshkosh, where Baker attended UW-Oshkosh and studied art while working full time for the Oshkosh Northwestern newspaper as a graphic designer. A year later he transferred to the Madison Media Institute (in Madison, WI), and finished a technical degree in Web Design in 2000. 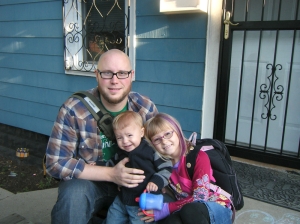 From a practical standpoint, the web was still fairly new, and few had much experience in building websites (including, he says, his teachers). He took the opportunity and ran with it, cramming his head with knowledge about the new media. When he and his wife moved to Milwaukee, he found a job with Avicom, a small marketing agency in Waukesha, and watched it grow from ten employees to sixty, then plummet to six before it was bought out.

While the agency imploded, his family exploded, adding three children with magical names: a daughter, Greenleaf, a son Tennyson (who lived only three days having suffered from a genetic disorder) and lastly, in 2008, a son, Soren.

In 2007, Baker took a summer job teaching web design for the Department of Housing and Urban Development in Milwaukee. Then he was hired as an Adjunct Instructor in Web Design at Waukesha County Technical College, where he created curriculum and taught a range of programming and design courses for five years. 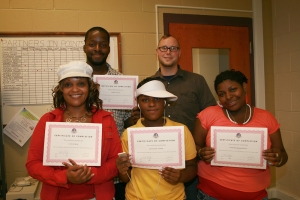 My first teaching job with Milwaukee Housing Authority at the Lapham Park facility, 2007.

When the final implosion arrived for the marketing agency in Waukesha, he headed for UW-Whitewater, where he worked as a web developer on a team. “I commuted fifty minutes each way through snow storms and drought, but continued to teach part time and moonlight nights,” he says.

These were the years when Punch was pretty much a vision for the future. Baker had gotten to know two guys who would become his partners (Ted Mayer and a second partner who shall remain nameless as he has a full-time job elsewhere and moonlights with Punch), and they couldn’t help wondering why they were working so hard for someone else’s boat payments.

Enter Punch Manufacturing, cobbled from a long list of word combos. “We chose ‘manufacturing’ to reflect our belief that what we do is essentially blue collar: we make things, though our objects often do not exist physically,” Baker says. Most of their clients think Punch means something like “pizzazz,” but that was not the intention in the naming. Baker is the web developer and Mayer is the designer. Mayer also works from his home, albeit in Waukesha.

With clients all over the state, and a belief in authenticity and relationship-building (rather than just building a portfolio), Punch Manufacturing will, if needed, meet with clients, but most of their “industrial strength” creative work is accomplished online.

Meanwhile, Baker hasn’t lost touch with his religious roots. Several years ago he began writing a blog as a way to deconstruct the theology beliefs. He writes at differenceclouds.com, and says that oddly, this has resulted in an affirmation of those earlier beliefs. Comprised of mostly long-form writing about theology and ethics, from a lay perspective, he supplements it with his Twitter feed, a mix of online art sources and theological exploration, as well as, Milwaukee-related information.

Love God and love your neighbors….it’s still that simple, Baker feels. “I believe,” he says, “there is no better place to live that out, than in the heart of the city.”