By Maggie Quick, Milwaukee Neighborhood News Service - Jul 9th, 2013 11:31 am
Get a daily rundown of the top stories on Urban Milwaukee 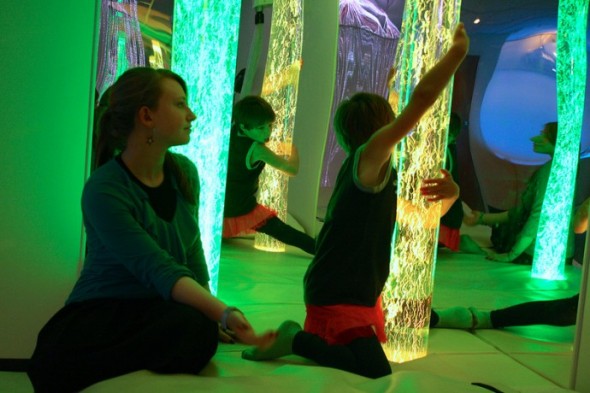 Aidan, an energetic 7-year-old, enjoys summer camp. He paints popsicle sticks green and yellow to make a sunflower, sings songs, plays on the swings and has snack time. Unlike children at a typical camp, however, he also works with a speech pathologist, a neurological musical therapist and an occupational therapist.

Aidan has Asperger’s Syndrome, a disorder on the autism spectrum. This summer he attends the Sensational Summer Day Camp at the Milwaukee Center for Independence, 2020 W. Wells St.

“He really likes it here and that’s huge,” said Jennifer Schuette, Aidan’s mom. “Usually, everything that I’ve ever tried, he’s been resistant.”

The prevalence of autism in the U.S. has risen to one in every 88 births, and almost one in 54 boys, according to the Centers for Disease Control and Prevention.

The camp, aimed at children ages 6-9 with autism or sensory disorders, offers six-week sessions from late June through Aug. 2. Campers use the playground and classrooms at the School for Early Development and Achievement, as well as the center’s Multi-Sensory Environment. Tracey Sparrow, vice president of children’s programs for MCFI, said the center recognized the need for a camp like this before it started last year.

“Most camps are led by college students,” Sparrow said. “They don’t have the expertise [needed for these kids].”

The day camp, which runs from 9 a.m. to noon, includes time with a speech pathologist an occupational therapist and a neurological music therapist. Activities are planned to help promote independence, social skills and communication. For example, Aidan and another camper worked on their fine-motor and visual-motor skills playing a bowling game on an iPad mini. They also practiced taking turns. 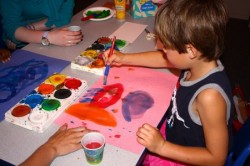 Aidan, a camper, paints a fish during craft time. (Photo by Maggie Quick)

“With autism and the whole social interaction thing, turn-taking is hard,” occupational therapist Sabrin Rizk said. “[The activity also builds] positive interaction skills, like praising your peers when they do a good job.”

The campers work on gross-motor, fine-motor and sensory activities every day, according to Kirsten Schohl, education coordinator. Activities include obstacle courses, playground time and playing catch with water balloons.

“We’re very flexible with what we can do. Sometimes it goes awry,” Schohl said. “[The kids] are a lot of work; very challenging, but very worth it.”

Snack time is used to teach social communication, nonverbal skills and manners. This might involve not getting up from the table while eating, addressing people by name and eating appropriately, as well as self-care habits such as washing hands.

Campers also paint and make crafts. Rizk said the art projects are important because many children with sensory disorders need to get over their aversion to getting their hands dirty. The art projects also teach the kids how to follow directions.

All the campers enjoy the Multi-Sensory Environment, a special room created to stimulate their senses, according to high-school volunteer Feige Bates. There is only one other facility like it in the state. The padded room contains a waterbed, fish tanks, mirrors and mirror ball, texture board, ball pit, light canopy, columns of bubbles that change colors and a pad that vibrates along with the music being played. The all-white environment reflects colors and the padding allows kids to safely jump, crawl and move around as they please.

One mother said her daughter was a better listener after using the room because she had “mellowed out,” according to Bates.

Rizk said the variety of sensory input that kids are exposed to in the Multi-Sensory Environment is what makes it helpful. “If you’re trying to satisfy your sensory system, you should have a nice balanced diet of sensory input,” she said.

Music fits well with the children’s sensory needs, along with making them feel good, according to Schohl. The neurological music therapist teaches the kids songs and has them play instruments to work on non-musical goals and stimulate brain activity.

Schuette hopes the camp will help Aidan, who also has Tourette’s Syndrome, because it is difficult for him to make close friends.

“He’s had sensory issues ever since he was born,” Schuette said. “Because he’s high-functioning it’s kind of a gray area…. It’s so hard outside of the professional realm [for people to] understand him.”

People who have Tourette’s experience uncontrollable facial and body tics. Recently in a park, some children noticed Aidan’s twitching and called him a “monster.” When her son started crying, Schuette said, she felt terrible for him.

“I’ve been looking for something like this,” Schuette said of the camp. “There are a couple of [other] things out there but they’ve been expensive. When you have special-needs kids, anything you do is expensive.”  The Sensational Summer Day Camp costs $300 per week.

Schohl said she wishes the camp could run longer and admit more children. “There really isn’t a lot for the kids to do in the summer, so it’s nice they get to do something a little like school … that’s also fun.”