At age 27, she’s building a national profile as artist while doing dog therapy on the side. 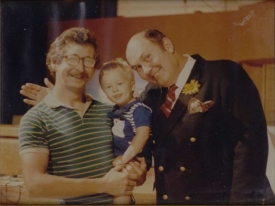 Mary Katherine Overman was born on November 30, 1985 in Wichita Falls, Texas, where her dad was the news director for station KFDX. She showed me a photo of him holding her brother Jesse. A beaming toupe-less Willard Scott (A star of the Today show in the 1980s) stands nearby. The Wichita Falls Web site trumpets “blue skies and golden opportunities.”

But the skies were not always blue for Mary. By the time she was 4, her mom (whose mother was born in Cebu, Phillipines, and raised in Shanghai) had divorced, moved her family to Green Bay, and later to West Allis. With a degree in agriculture (from the University of Minnesota), her mom was able to gain employment with the Milorganite division of the Milwaukee Metropolitan Sewerage District, about as Milwaukee a job as you could find.

Mary attended public schools in West Allis and graduated in 2004 from Nathan Hale.

Then it was off to UW-Stout where she received the “Bud and Betty Micheels Student Artist-in-Residency,” plus a $3,000 grant from the university.

Her dad, a Vietnam veteran who suffers from Post Traumatic Stress Disorder, receives government support for his disability, a portion of which helped Overman and her brother Jesse advance their educations. Jesse earned a degree in film/radio/television from UW-Madison, and is currently an editor a Los Angeles company that produces commercials for television programs. 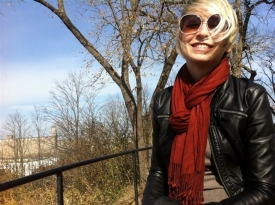 Mary originally intended to major in biology, but decided instead to go for a B.A. in Studio Art. It took her six years (she finally graduated in 2010), because she kept dropping and adding classes in her search for knowledge. To Overman, the value of art is that it can embrace all fields of study, including history, science, philosophy, and it is “always an open discussion” with no final conclusion. She wishes, however, that her art courses had included more about the art of writing.

In many ways, over the course of her still young life, she’s made her own golden opportunities and blue skies…..primarily via travel and volunteering. At age 15, she received a scholarship from the Rotary Club of West Allis, and used it for one month in Igulada, Spain, soaking up a bit of culture and language. At age 17, she began volunteering at the Elmbrook Humane Society, and a year later, at the Wildlife Rehabilitation Center at the Wisconsin Humane Society. In tandem with her mom, at age 18, she visited Costa Rica and practiced her Spanish, and a year later she visited Thailand as part of a class through UW-Stout called “Study of Minority Cultures,” and submerged herself in the cultures of the Hmong, Lisu, Lahu, and Karen tribes. 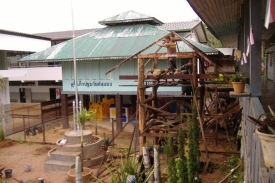 Her experience gave her confidence to return (alone) to Thailand and volunteer as an English instructor in a rural area where almost no one was fluent in English. An English-Thai dictionary became her best friend, supported by lots of non-verbal communication. In the jungles of northern Thailand, she lived with a hill tribe and continued trekking on her own. 2008 took her to Seville, Spain for five months, with side-trips through western and central Europe.

In 2010, not long after graduating from Stout, she was hired as the Membership & Exhibition Coordinator at Walker’s Point Center for the Arts. Membership is important for a non-profit that relies heavily on volunteers, and Overman’s background in various cultures and her interest in the conceptual side of art are a good match for the kind of exhibitions shown at the gallery.

If you visit her web site, www.maryoverman.com, you’ll see that as a working artist she has exhibited her art in Washington DC, Chicago, Texas, Italy and many galleries in Wisconsin, and has produced paintings, sculptures and installations. Some of her paintings use blood (she buys cow blood from butchers) and on occasion elicit strong reactions from viewers. Recently, a few were exhibited in Madison.

She says her art work “creates a dialogue” about “the underlying psychological and social determinants of longevity and humanity’s longing for its attainment.” Painting with blood can certainly raise the issue of mortality.

When not immersed in the art world, Overman and her dog Seva, a beagle/boxer mix, work as a “certified therapy” team. Adopted by Overman from the Elmbrook Humane Society, the dog was selected because of her calm disposition. As a candidate for therapy dog training, Seva had to be patient for a six-month waiting period prior to entering two months of classes, capped off at the end with a test titled, The Pet Partners Aptitude Test. It includes role-playing, where evaluators simulate possible outbreaks by a person getting therapy, perhaps one who shouts and moves around a lot. Another portion of a test titled Pet Partners Skills Test, demonstrates whether the animal can be controlled by the handler. 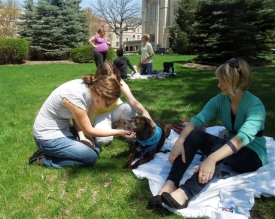 Her dog Seva at Mount Mary with Health Heelers. Photo by Laura Hey.

The two passed perfectly, and also volunteer with Health Heelers, a group which makes visits to assisted living facilities, universities, and various other places. Students stressed over their own tests in academic achievement, get to spend time with Seva. In May, they visited Mount Mary College to calm some levels of stress.

Overman speaks of six-year-old Seva and herself as “we.” Together they volunteer at the Cancer Center at Columbia St. Mary’s, often visiting patients who are waiting for their chemo treatments. Physical contact is extremely important in taxing situations, she says.

Her Riverwest life is shared with two female roomies, who are studying Art Therapy at Mount Mary College, and an adopted tabby named Rhyan. All those aforementioned “psychological and social determinants,” look great on an artist’s statement, but frankly, we like the simpler way of describing her as one intent on keeping the skies above her blue, and the opportunities before her golden.